Alumni discuss careers and future of the healthcare industry at panel 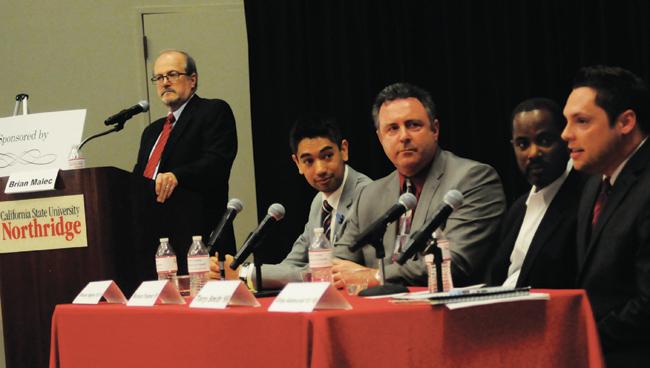 During a healthcare panel titled "Inside the Health Industry," CSUN alumni gathered to discuss information concerning healthcare. It was moderated by Brian Malec. The panel included George B. Higgins, Richard D. Trogman, Terry L. Smith and Gregory B. Adamczak.

CSUN alumni from the healthcare industry spoke to students about the path toward their careers, their experiences and gave advice in a discussion titled Inside the Health Industry Panel at the University Student Union (USU) Grand Salon on Wednesday evening.

The panelists for Inside the Health Industry came from various employers, including Kaiser Permanente and AIDS Project Los Angeles. Former Chair of Health Sciences Department Brian Malec served as moderator for the event.

Jonathan Adrias, program coordinator for the Alumni Association, said the purpose of the event is to bring in “four CSUN alumni from varying niches within the health industry to talk about some of the career trends that are going on in the health industry now, the future of the health industry, as well as give in some general advice, tips and tricks and other topics to students, alumni, faculty and staff members here at CSUN.”

Adrias said this event had a strong influence on students.

“It impacts a lot of the students that are interested in getting into the health industry but are not too sure of whether they have another discipline such as English.”

When asked about why he entered the healthcare industry, George Higgins, clinical nurse at UCLA, said he didn’t want to follow in his parents’ footsteps despite their encouragement.  Higgins studied Asian American Studies at CSUN, but found his inspiration after graduating.  He recalled how he gained satisfaction from serving customers at Starbucks and realized he wanted to serve the public.

“CSUN allowed me to turn my life around,” Higgins said.  Higgins returned to Cal State Northridge to begin his studies towards becoming a nurse.

A few minutes into the presentation, Malec asked the panelists, “What inspired you to get into the healthcare industry? How did you get started in this field?”

Higgins responded that his parents both went into nursing. Although they advocated for him to follow that route, he didn’t want to do what his parents did for a living. In his words, he decided to take the “easy way” out. He decided to study Asian American Studies here at CSUN.

Soon after leaving school, he said he discovered that what he wanted to do was serve people. He recalled that his greatest pleasure was serving people coffee at Starbucks because of customer reaction. To be able to put a smile on customers’ faces, meant a lot to him. So then it hit him, he wanted to be a nurse. “CSUN allowed me to turn my life around,” he said.