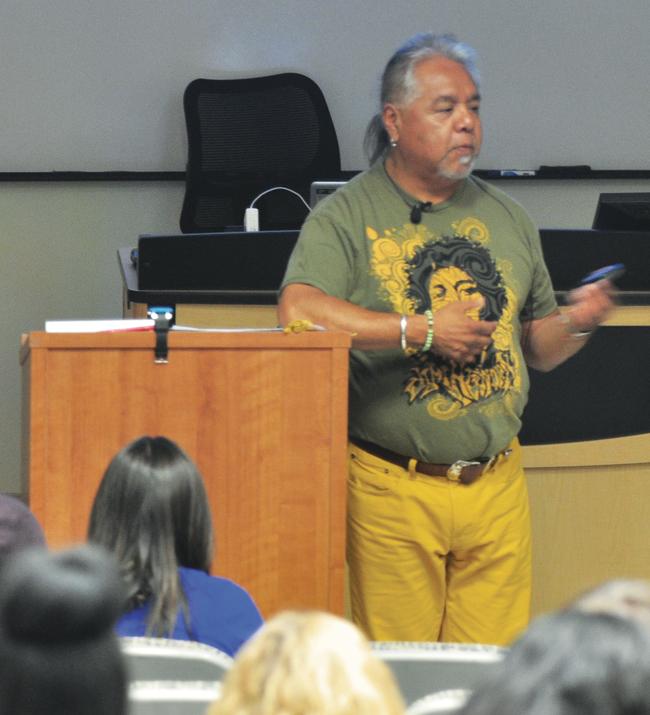 The presentation entitled, “images, dialogues, and emotions,” depicts various performance, multimedia and installation art that emphasize the similarities in culture as people.

Luna said the piece is meant to celebrate his multicultural heritage.

“‘Family Matters’ is my response to dispel the negative connotations associated with Native Americans as a people,” Luna said.

Prior to becoming a full time artist, Luna, worked as a counselor for 23 years.

“My strategy as an artist, is to address similarities over differences in the route to

confrontation,” he said. “I’m still pissed off, I just approach it in a different way.” Luna also referred to the Native American community as one that thrives.

Spirituality is a theme embedded in Luna’s work, as he believes that it plays a strong role in the Native American culture and community.

In the video piece, Luna wanted to capture the spirit of tranquility on the reservation, and to honor his ethnic roots by depicting old images of his grandparents.

Luna is of Pooyukitchum and Mexican-American ancestry and currently resides on the La Jolla Indian Reservation.

The presentation illustrated a brief history of Luna’s work and artifact pieces that brought him notoriety as a contemporary visual artist in 1987. Balboa Park in San Diego was the first public exhibition for Luna after he submitted a proposal to show his work.

“It’s my job to dispel the negative connotations associated with Native American people. I want to get you to rethink about American Indian, Central American, and South American people,” Luna said.

Luna recently donated 30 years of his archives to a Native American art gallery in order to promote cultural awareness.

“Unlike other museums, its about the present, you get your feel of American Indian history in the textbooks, all five pages of it,” Luna said.