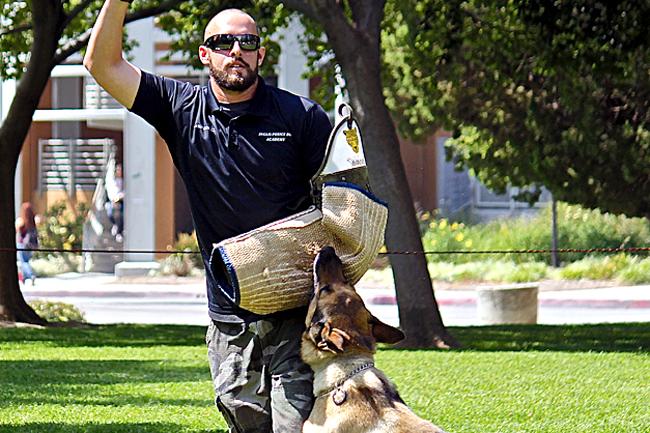 The CSUN Police Department, along with other local law enforcement agencies, hosted “Meet the Dogs,” a fundraising benefit for the police department’s K-9 unit Wednesday at Bayramian Lawn.

Captain Alfredo Fernandez, head of the CSUN PD K-9 Unit, said the event serves as a way to introduce the police dogs to the local community.

“This is our first fundraiser of this kind,” Fernandez said. “We want to get the dogs out there in front of the students, faculty and staff and just get to know the dogs.”

Ventura County Sheriff’s Office Sgt. Vince Camou said the public can gain a lot from coming out to these type of events.

“Everyone is always curious about police dogs and most people like dogs, man’s best friend,” Camou said. “You’re able to see how the officers handle the dog and you can see what the dogs do for the public.”

The event included demonstrations like explosive detection, narcotics detection, handler work and search and rescue as well as the opportunity for students to buy merchandise, including t-shirts and beanies, with the proceeds being distributed to the CSUN PD K-9 Unit.

Fernandez said funding the K-9 unit is important given the dogs serve as a valuable resource to the community.

“They serve so many different functions in law enforcement like explosive detection, narcotics detection and tracking,” Fernandez said. “They can do the work of, if not more, up to 10 different officers so they have an incredible function in the law enforcement community.”

Fernandez said it’s important to fundraise because of how expensive it is to keep the dogs.

Given the tenuous financial situation, Fernandez said donations are important to maintaining the units without having to dip into state resources.

“What we try to do is avoid using state funds when it comes to purchasing the dog and their training, which is pretty expensive,” Fernandez said. “We would rather get the funds which we get donated so that we’re not taking away from state funds.”

The Ventura County Sheriff’s Department, Ventura County Search and Rescue and the K-9 units from Cypress PD, Ventura PD,  Glendale PD and Homeland Security were all in attendance and contributed to the demonstrations.

Despite not seeing any of the proceeds, Fernandez said other agencies show their support by participating in the events, an act which CSUN PD will reciprocate when those agencies hold similar events.

Camou said it’s important for agencies to help one another given the costs of maintaining the K-9 units.

“The event is a fundraiser for the dogs because most K-9 units are self-funded, meaning medical bills, purchasing the dogs, training and it’s all very expensive,” Camou said. “When you’re done with it, it’s about $22,000. “

Camou said CSUN PD will be reciprocating at his event, “Dining with the Dogs,” which will be held on May 3 at CSU Channel Islands.

“People can come, have a nice dinner, watch obedience training, search and rescue and other demonstrations,” Camou said.

For those unable to attend the CSUN PD’s event, Fernandez said donations can be directly given to Fernandez or anyone in the police department.

“We will gladly accept your donation,” Fernandez said. “We usually go through a foundation called the National Police Dog Foundation, which takes donations on our behalf.”