Baseball: Matadors give up four in fifth, drop rematch with Pepperdine 9-5 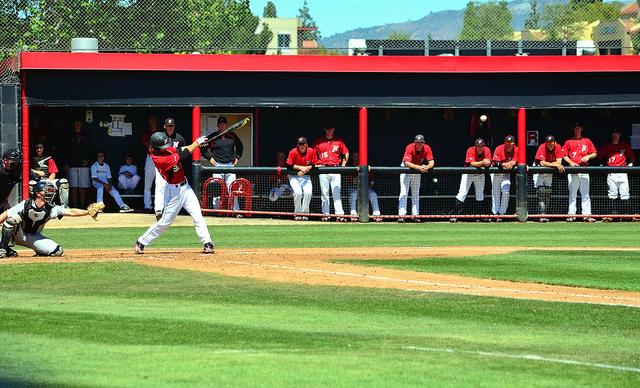 Since their March 25 match-up, the Matadors (13-23) and the No. 19 Pepperdine Waves (26-8) have been heading in different directions. Their last meeting saw the Matadors winning 4-2 at Eddy D. Field Stadium. The Matadors have struggled ever since, losing eight of their last 10 games.

Tuesday’s nonconference matchup came down to a big fifth inning by Pepperdine.

The Waves scored four runs off of three hits in the fifth inning as they established a comfortable lead that would hold until the last out. Already leading 2-0, Pepperdine smashed two doubles which cleared the bases for a combined three runs, and Waves sophomore first baseman Brad Anderson knocked a single to bring the score to 6-0.

The Matadors responded with a single run in the fifth inning, an RBI on a sacrifice fly from junior left fielder Nick Blaser, which scored junior designated hitter Michael Livingston.

CSUN’s bullpen was active as there were five pitching changes in the game. Sophomore right-handed pitcher Jordan Johnson, who made his first appearance of April, only gave up one run in the first three innings before being relieved by senior right-handed reliever Michael Coates.  However, despite five different relievers allowing eight more runs in the game, Johnson was charged with the loss as he exited the game trailing 1-0.

After giving up only one run in the sixth inning the Matadors began to mount an offensive rally. Junior outfielder Chester Pak, who had three hits on the day, earned his only RBI on a ground ball as junior second baseman Ryan Raslowsky crossed home plate. Junior catcher Nick Murphy crushed a homer deep to left field in the next at-bat, reducing Pepperdine’s lead to 7-3 with just one out. Two fly outs would end the inning however.

Trailing 8-3 in the bottom of the eighth inning, CSUN scored two more runs off of small hits.  With two men on and no outs, junior left fielder Nick Blaser hit into a double play but was safe after Anderson made a throwing error, which scored Pak from second base.

Murphy, previously on first base, would run into third base, but on his turn towards home plate as he slowed down, was hindered by Pepperdine third baseman Austin Davidson.  Head coach Greg Moore had a long conversation with third base umpire Bradley Hungerford, but was not ejected and did not get a reversal on the call.

“I thought there was obstruction, he didn’t think there was,” Moore said. “He’s the umpire and that’s the final word.”

Pepperdine scored in insurance run in the ninth inning, and CSUN saw Pak’s third hit of the day rendered moot as Murphy hit the first pitch he saw with two outs and grounded into a fielder’s choice to end the game.

Moore did find some positives in the loss, as the Matador offense showed more improvement in scoring five runs off of 11 hits and only striking out two times in 37 at-bats.

“I think that the hitters are doing a good job of leaning over and putting balls in play that we weren’t earlier in the year,” Moore said.  “It’s encouraging to see the way the hitters are approaching with two strikes.”

The Matadors have now lost five straight games, but both players and coaches are confident that clubhouse morale has not been affected.

“These guys are fine,” Moore said.  “This group will be just fine, I’m not worried about them.”

Pak, who had a multi-hit day for the first time in six games, echoed Moore’s words as he said the team will put the loss and losing streak behind them.

Next up for the Matadors is the Hawai’i Rainbow Warriors (14-19) on Thursday at 3 p.m. at Matador Field.