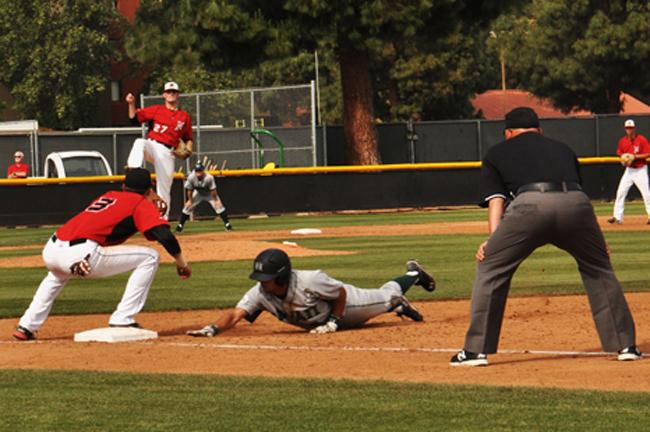 Matadors Brycen Rutherford (Center) makes a pickoff move to the first baseman Will Colantono (Bottom Left) as a Hawai'i baserunner leaps for the base. (Photo Credit: Zuying Chen / Contributor)

Both the Matadors (14-23, 3-7 Big West) and the Hawai’i Rainbow Warriors (14-20, 2-8) have had a tough time winning in the month of April and looked to put an end to it in the series opener at Matador Field. The Matadors were fighting to put a halt to their five game losing streak while the Rainbow Warriors hoped they would come out on top to put an end to their six game losing skid.

The Rainbow Warriors were first to get on base but struggled to score with a strong 7.1 innings pitched by senior right-handed pitcher Brycen Rutherford that would help the Matadors win the game and end their skid.

“I just came into this game and just wanted to pump the zone, give our hitters a chance to score and get ahead,” said Rutherford.

After a scoreless five innings, the Matadors got going in the sixth inning with junior catcher Nick Murphy moving up to second base after a bunt by sophomore infielder Nicolas Osuna, who would make it to first after an error by Hawai’i.

Batting after Osuna with just one out was junior utility player Nick Blaser, who would also bunt and sacrifice to move the runners up and into scoring position.

With two outs and two runners on base in the bottom of the sixth, senior shortstop Brett Balkan put the Matadors on the scoreboard with a single to right field bringing in both runners to put the score at 2-0.

Rutherford would get through the top of the seventh inning quickly and with little problem and CSUN looked to add more runs to their lead.

A leadoff single to right field by senior outfielder Ranny Lowe got the Matador offense off to a strong start in the bottom of the 7th inning.

With no outs, junior infielder Ryan Raslowsky, who struggled in his first few at bats, hit a triple to right field that and would bring in Lowe to score and CSUN’s lead was extended to 4-0.

“I tried to hit the ball hard on the ground which I did my first two at bats so I just stuck with it,” Raslowsky said. “My third at bat didn’t go as planned, but I kept sticking with it and I ended up hitting that ball down the line and doing something for the team which was nice.”

The strong offensive play continued for CSUN with junior outfielder Chester Pak getting to first base with no outs and in the next at bat, Murphy would hit a single bringing in Raslowsky to put the lead at 4-2.

The Matadors extended their lead before the inning came to a close with Blaser hitting it down the middle to score two more runs and Cal State Northridge finished the inning 6-0.

Hawai’i went on to score two runs off right-handed reliever Shay Maltese, who walked three different players, including the two that scored, but they would come up short losing 6-2.

“It was just about getting better and today and you know the offense was very good,” head coach Greg Moore said. “They were tenacious in their at bats. That was the biggest difference today, and then Bryce set up a tone.”

The Matadors will be back in action against Hawai’i today at 3 p.m. and will close the series out on Saturday at 1 p.m. at Matador Field.