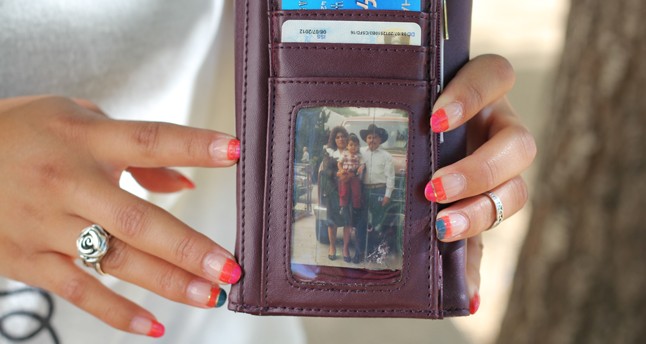 Jasmine Sanchez, sophomore sociology major, holds a picture of her and her grandparents. Photo credit by Brionna Lewis.

If you’re like most students, you carry the essentials: pens, pencils, a notebook and maybe a laptop or iPad. But there are other things students carry–funny things, quirky things, things that tell a little bit about who they are.

Freshman Brittney Harvey, deaf studies major,  does not leave the house without her book, ‘The Superman Handbook.’ This book with a blue superman on the cover, is a manual containing every necessary and perhaps not-so-necessary life skill imaginable.

“It literally teaches you how to be superman,” Harvey said. “It’s pretty awesome.”

How to treat an animal bite, how to escape quicksand, how to change a flat tire, and even how to dodge a bullet are all detailed in the book. It has everything you may ever want or need to know so that you are prepared for any and all situations.

After carrying the book in her bag everyday for nearly two years, Harvey said she is both disappointed and relieved that she has never needed to use it.

“I always keep it with me because you never know when something is going to pop off,” Harvey said. “I’ve never had a chance to use it, but I don’t want to be without it when the chance comes.”

Other students carry things in their backpacks that are a bit more practical.

Sarah Loaffler, junior film production major, doesn’t have anything of real sentimental value in her bag, but remarkably, she does have stamps.

“I just bought them. I’m going to mail a bill today,” Loaffler said.

Despite the fact that many people have moved to online bill paying, Loaffler still prefers to pay some of her bills by mail for no particular reason. She carries a few other useful items in her backpack such as earphones.

“I don’t usually listen to music, but I still carry them just in case,” she said.

Loaffler also carries a sweatshirt, in case she gets cold. This particular day, it was a University of Hawaii sweatshirt, a souvenir gift from her parents.

“I didn’t go to Hawaii, but my parents did, and they brought me back this sweatshirt,” Loaffler said.

Laura Ramos carries a pen in her bag, however, the pen is good for more than just a practical use for the junior sociology major. This silver, hand-carved pen with charms, is her lucky pen.

She said that she rubs the pen whenever she needs things to go her way, especially before big exams.

“I feel like this pen helped me pass my sociology midterm,” Ramos said.

Ramos received the pen as a gift from a friend about five months ago and has carried it with her everyday since. Though she can’t remember what part of the world the pen was made, she thinks it’s special because it was made by hand.

“Somebody out there made this,” Ramos said. “I feel like keeping it with me. (It) brings good vibes.”

On any given day, you can find ping pong balls in the backpack of senior kinesiology major, Ronald Villar. Not to be mistaken for beer pong balls, Villar actually uses them to play table tennis. Villar also carries his table tennis racquet so that he can practice for CSUN’s table tennis team.

“I try to play everyday, so I always have it with me,” Villar said. “It’s easy to play decently but to get better than that, it takes a lot of practice.”

Villar said he started playing for fun in 2008,  but when he came to CSUN he met some really good players that really improved his game. Two years ago, he and his friends decided to bring back the once inactive table tennis club, and the team now competes against other colleges and universities.

“My favorite part is getting to meet new people and going to other schools,” Villar said.

The days of people pulling pictures out of their wallet to show people images of their loved ones is long gone. Today, most people keep all of their pictures on their smart phones, but not Jasmine Sanchez. Sanchez, a sophomore sociology major, still carries a wallet sized photo of her and her grandparents.

“It’s the only picture I have in my wallet actually,” Sanchez said.

The photo was taken circa 1996 in front of her grandparents red pick-up truck, just outside of their house in North Hollywood. Sanchez said her grandparents have always lived just blocks away and were very involved in her life.

“My mom would work a lot, so they pretty much helped raise me,” Sanchez said. “I’m really close to them.”