Baseball players pitch in to clean up Matador Field 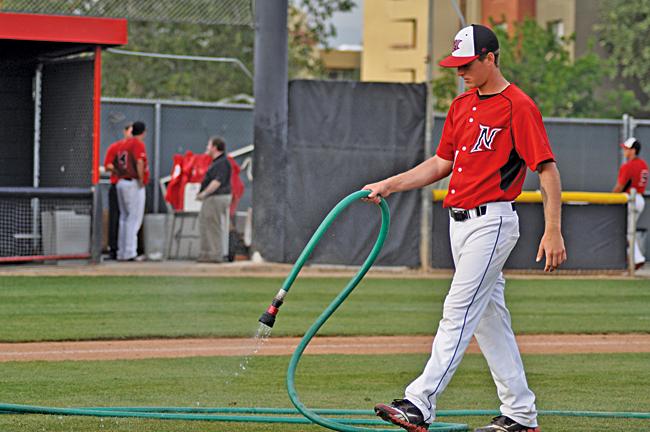 Immediately following the final pitch of a 6-2 victory at home over the Hawai’i Rainbow Warriors on April 17, Matador  baseball players line up and congratulate each other and head over to the outfield, where they meet with coaches for a brief post-game meeting.

Following their coaches’ briefing, players don’t head for the showers, run to the locker room or say hello to fans, friends and family in the stands. Matador players head over to the CSUN bullpen, where groundskeeping equipment is stored.  Infielders grab rakes and water hoses, pitchers gather bags of dirt and tools in a wheelbarrow, and junior second baseman Ryan Raslowsky jumps on a John Deere with a drag mat and drives onto the infield dirt.

The players’ actions are not just a helping hand for longtime Matadors facilities manager Mark Adamiak and assistant Brian Mulligan.  A two-man crew, who tend to facilities including Matador Field and Matador Diamond for as much as eight to 10 hours per day, requires the help of the players to care for the field after each game.

“We don’t get the money that other people get,” Adamiak said. “We piece things together around here.”

Regional baseball powerhouse programs, such as the UCLA Bruins, employ a four man turf crew to care for their field before, during and after games at Jackie Robinson Stadium. At CSUN, Adamiak and Mulligan have to work with limited resources.

“Unless you have a stadium and a crew, and we don’t, we have kids, they all have jobs,” Adamiak said. “Some (players) have sweeping the dugouts, others have bullpens. Laying the tarps, that’s pretty much what they do.”

The team’s responsibilities are further reaching than simply sweeping and covering the field up.

“Each guy has a game job, and a field job,” Moore said. “It varies a bit by the day, but for instance, the third baseman will take care of the third base foul line. The pitchers work on the pitchers’ mound. They each take responsibility for a segment on the field and put pride in their work and really pay attention to the details.”

Pitchers gather brooms, tarps, tamps and dirt in a wheelbarrow and head straight toward the most damaged portion of the field. With an average of 200 pitches or more thrown per game by several pitchers, the mound is reduced to a series of ditches where cleats dig in during each pitch.

Junior pitcher Louis Cohen, along with sophomore pitcher Calvin Copping, patch up the holes with dirt. Cohen packs the dirt in with a tamp, and rakes the mound in a circular motion as he and Copping even out the dirt and prepare  for the next use. Cohen, who has taken a greater responsibility in caring for the pitching mound pre-game and post-game, mentors Copping on what to do to repair the mound.

“When I came here, the pitching staff always did the mound,” Cohen said. “I kind of just took over, I learned from the guys, watched them, and from there I realized it’s my turn to make sure that this thing is done correctly. And ever since then that’s all I’ve done.”

Cohen has been tending to the pitching mound for four years, and had previous experience working on the field from his high school playing days at Great Oak High School in Temecula. Adamiak said Cohen is one of the hardest working baseball players helping him and Mulligan care for the field.

“Cohen does the mound, that’s his pride and joy,” Adamiak said. “How well (other players) do their jobs is another thing, but Cohen does a really good job with the mound.”

Although Adamiak and Mulligan talk with players at the beginning of the season, the coaches have become more involved in encouraging players to complete their field duties.

Moore noted that players’ responsibilities have become part of their daily routines, the same way batting practice or stretching might create a sense of a game day routine.

Adamiak said that coaches will time players to see how fast they will stretch out the tarp when rain delays a game.

“We respect (the field),” Cohen said.  “We feel that if we’re going to play on something that’s good, we have to take care of it ourselves.  We go out there, we make sure that it’s to the standards that we would like.”

Despite players’ responsibilities of day-to-day tasks, both players and coaches are quick to give Adamiak and Mulligan credit for the field they play on. Mulligan believes Matador Field “is the most beautiful place on campus,” and Moore agrees.

“The crew that we have, Mark and Mulley, are among the best in the business,” Moore said.  “We are so lucky to have them, and our players feed off their attention to detail.”

Although Adamiak and Mulligan take pride in their work and appreciate the team’s contribution, they do admit having the players play on the field is hard to watch.

“That’s the hard part about all this,” Adamiak said.  “We get it looking like this, and then we don’t want players on it. But everything we do is TLC – tender love and care.”