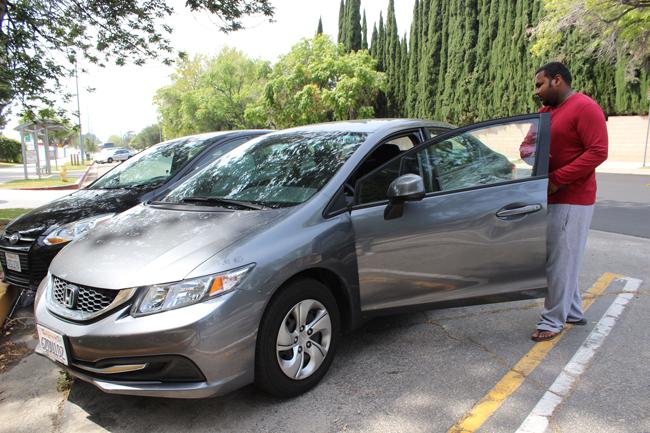 Samuel Boppuri, electrical engineer grad student, made a reservation to use the Zipcar Saturday morning. The Zipcars do offer their services on weekends.

Two months after the introduction of Zipcar to CSUN reports show high usage as Associated Students (AS) continues to educate more students about the program.

Ken Premo, Manager of Support Services for AS, oversees the Zipcar program. He said after two months of use Zipcar has reported that the usage rate for the vehicles is just over 37 percent. The Zipcars are available 24 hours a day, 7 days a week.

“That is really high for the second month, even the representatives from Zipcar were surprised,” Premo said.

Currently, the program has two cars and they are located in the F10 parking lot on Lassen and Lindley. Premo said that Zipcar will add more cars to the campus program one usage reaches between 45 and 50 percent in order to meet increasing demand.

“We should be hitting the 45 percent mark quite soon,” Premo said. “It’s likely that we will be adding new cars in the fall.”

Walter Harris, a fourth year child development major, said he has had only positive experiences with Zipcar.

“It has been one of the most reliable things for me here at CSUN,” Harris said.

Harris said that the car is usually available the times that he needs to use it, but would suggest that students reserve the car ahead of time.

Daniel Malki, a freshman business law student, said he has used the Zipcar once this semester.

“I used the Zipcar to go pick up my mom from the airport,” Malki said. “At first I was kind of confused about how it all works, but it was easy after I got signed up and everything.”

He is hopeful more and more people will eventually begin to use the smart cars.

“I think if more people knew how easy it was, they would use it,” Malki said.

Premo said he has even used a Zipcar himself. Last month, he needed to go to a doctor’s appointment after work but didn’t have a car on campus because he takes the train to work.

“When I got in the car, the student that had rented it before me had left a grocery store receipt in the car and I thought that was so cool because that means students get it,” he said.

Premo said when introducing the program, administrators questioned why students would want to rent a car for just an hour or two.

“To students, it’s obvious why you would want to rent a car for an hour to get groceries, so you don’t have to walk and carry heavy bags back,” Premo said.

“I usually have to get rides from friends to go get groceries and stuff like that.”

Giron said if he can’t find a ride, he has to walk. He said he may join the Zipcar program, but he’s still a little skeptical.

“If I hear of other people using it and they like it, then I will probably try it too,” Giron said. “The price is right.”

AS will be looking for other locations on campus to put Zipcars, they want to make the cars easy to access for all students.

So far, there haven’t been any major issues with either of the cars. One of the cars needed a minor repair and Zipcar picked up the car, had it repaired and returned it the same day.

“Zipcar is really good about maintaining the cars and keeping them in shape,” Premo said.

AS is still trying to spread the word about the Zipcar program. Students may notice Zipcar representatives on campus at events giving information about the cars.

“As students come and go we are always going to need to be educating them on what Zipcar is, what the service does, and how to use it,” Premo said.