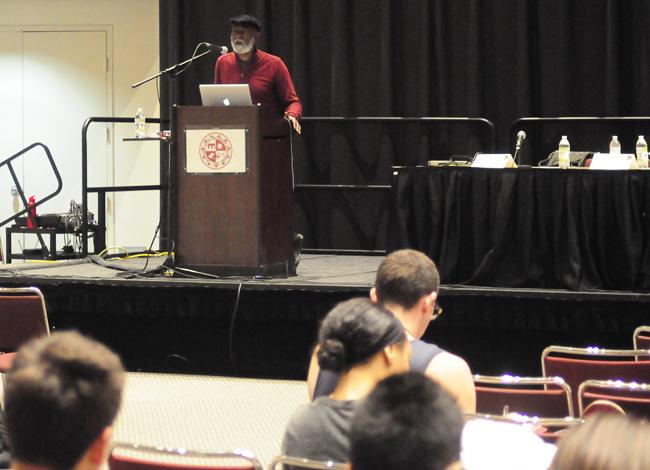 The African Studies Interdisciplinary Minor Program held a symposium that discussed why Africa is having an environmental crisis and what can be done to prevent future damage.

The event, Sustainability in the African World: A Call for Collective Action, focused on environmental issues in Africa, in observance of Earth Day.

Tom Spencer-Walters, Pan-African Studies professor, gave a presentation called African Vulnerabilities: Environmental Pollution as Toxic Neo-Colonialism, that focused on how other countries have made the African continent vulnerable to an environmental crisis.

An issue discussed regarding Africa’s sustainability is the waste dumping business. Waste such as chemical solvents, acids and electronic waste that is prohibited from being buried in places like the US but is bein buried in African soil.

“The high cost of disposing hazardous waste in the west is also another reason why they use foreign markets for (dumping) hazardous waste,” Spencer-Walters said.

Western countries are able to dump hazardous waste into Africa by telling the residents that the materials in the waste will not harm them. Spencer-Walters said they believe them because of their lack of knowledge about certain products that contain hazardous materials.

“Many toxic products are put in containers and are deceptively labeled,” he said. “A lot of the ships that take toxic waste to Africa, they don’t identify them as toxic and dangerous, they put them in various kinds of containers that may say, ‘simple fertilizer’, etc.”

Another presentation dealt with the environmental crisis in Congo.

Environmental Crisis, and Mining Terrorism in the Congo: Prolegomenon for an African Philosophy of Sustainability. He talked about how the war and mining terrorism is linked to Congo’s environmental crisis.

“In the case of Congo the first major cause of pollution is mining,” said N’Kulu-N’Sengha.

Mining companies in U.S., England and Germany have laws that prevent them from operating certain mining procedures. In order to get around those laws, they go to Congo to take advantage of the lack of regulations and do whatever they want, said N’Kulu-N’Sengha.

N’Kulu-N’Sengha was in Robushi, South Africa where the contamination was so bad, that women were giving birth to children without limbs, mouths and other body parts.

Coltan, is a metallic ore which is refined and used in computers, cell phones, and other micro-electrical circuits. It is found in eastern DRC (Democratic Republic of Congo), Australia, and only a few other areas in the world according to a report by Eco Cell.

They reported that Coltan mining causes direct environmental damage because miners will dig pits into streambeds, which destroys them, to try and find Coltan.  The report said, “More significant environmental damages results from the large camps of men (and armed guards) who poach wildlife to maintain their mining camps.”

N’Kulu-N’Sengha said in order to prevent environmental damage and increase sustainability is to teach Ubuntu, “…which is the African idea of genuine personhood. What I do to one person, I do that to many other people and I do that to myself,” he said.

He also suggests sacrificing some luxuries in order to preserve the environment. “In Africa when there is not enough food the mother doesn’t eat, she will give to the children,” N’Kulu-N’Sengha, “That notion in terms of the environment is we need to cut our consumption.”

De Maio’s research project was inspired after going to Kenya for a research assignment and watching a beauty contest that focused on the environment.

She wanted to see if there was a difference in how Africans, Canadians, Europeans and North Americans saw climate change and whether vulnerability plays a role in that.

“We looked at the World Value Survey, a data set of people’s attitudes on a variety of issues, and one of the things that they do is take people’s temperature on how they feel about climate change,” De Maio said.

De Maio’s hypothesis said, “People living in countries that are more vulnerable to the biophysical effects of climate change and have lower adaptive capacities are more likely to be concerned about environmental problems.”

The push to industrialise has lead to a decrease in agricultural production, which affected food security in Africa. There was a decline in water, fish availability, an increase in flooding and droughts and an increase in diseases being spread, she said.

“Agriculture comprises 30 percent of Africa’s GDP,” De Maio said. “It contributes about 50 percent of the total export value, but more significantly more than 70 percent of the continents population depends on the sector for their income.”

She said the US has a healthy and sustainable agricultural sector, but only 0.7 percent of the population depends on it. Most of the US population depends on the industrial and business sector.  If the US agricultural sector is affected by climate change, there is an insulation from the industrial and business sector that will allow the US to recover quickly.

“That’s not the case if 70 percent of your population is depending on that one sector, you’re going to feel the impact affecting that sector much more acutely,” De Maio said. “Not only do the conditions of  agricultural matter, but combine that with poor governance and low adaptive capacity and that’s where you really feel the impact of climate change.”

She also researched if Africans were more concerned about climate change compared to citizens in the rest of the world.

“We looked at Burkina Faso, Ethiopia, Malawi and Zambia and found that the attitudes among the countries differ,” De Maio. “Burkina Faso is not very concerned about water pollution, in Zambia people feel there is another industry that will protect them of agricultural fails.”

She found that societies with higher adaptability are not as concerned with climate change issues. “Part of that answer could be because (there is) a high adaptive capacity,” De Maio said.

The symposium was presented by the African Studies Interdisciplinary Minor Program and the College of Behavioral Sciences.