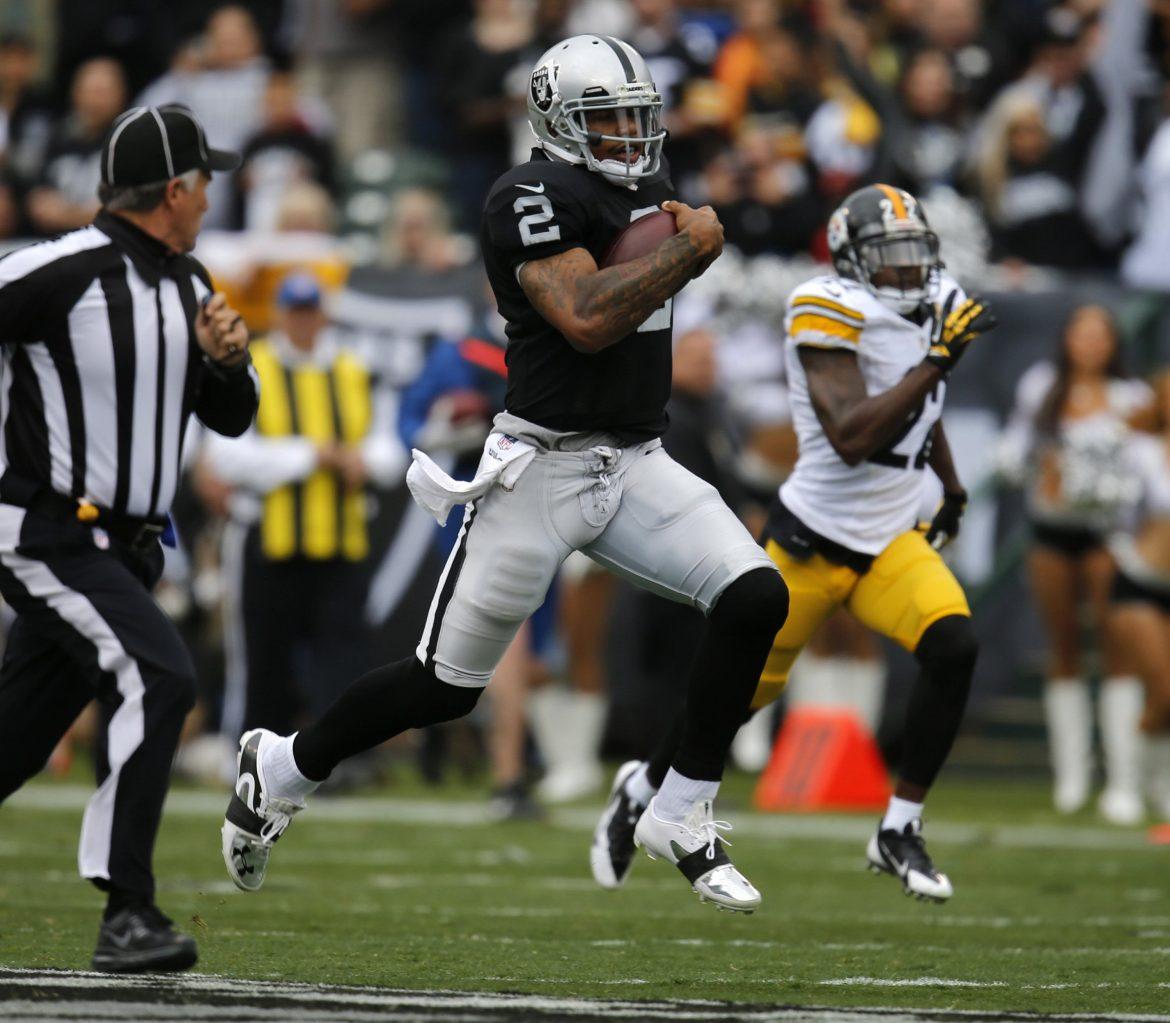 NFL teams began their quest for Super Bowl XLIX Tuesday with the beginning of offseason training activities (OTA). OTAs are teams’ first opportunity to welcome new players and assimilate them with team culture.

The defending champion Seattle Seahawks added one more new addition, by exchanging a seventh round pick in this year’s draft to the Oakland Raiders for quarterback Terrelle Pryor.

Oakland’s short-lived Pryor saga comes to an official end, despite Pryor’s show of promise as playcaller.

His departure signifies the end of an era, as Pryor was the last player ever selected by Al Davis, Raiders’ legendary owner and figurehead. Davis selected Pryor in the third round of the 2011 supplemental draft, after Pryor was suspended for a well known violation of NCAA rules.

Davis died later that season and would never see Pryor play a down of football. Neither would Davis be able to develop Pryor into the running and passing threat Davis envisioned when he selected him.

In fact, The Oakland Raiders never did Pryor any real justice as the developmental quarterback of the future.

The same year as Pryor’s selection, the team acquired Cincinnati Bengals “retired” quarterback Carson Palmer for an attempt at a playoff run. Exchanging a first and second round pick for Palmer sealed the team’s fate to the former Bengals’ quarterback for a season and half, while Pryor mainly sat on the bench.

Last offseason, the Raiders said goodbye to Palmer, and added Seattle’s then back-up quarterback Matt Flynn. Then the team drafted a quarterback in the fourth round of the NFL Draft, and signed undrafted free agent Matt McGloin. However, Pryor successfully won the starting position, despite coaches handing Flynn the job initially.

Even after winning the job and almost upsetting the Indianapolis Colts in week 1 with a record-setting performance, Pryor was benched in favor of McGloin, after a knee injury and struggles with defenses’ adjustments to his running ability.

This offseason, the Raiders traded for veteran Matt Schaub to be their starter. Combined with the Raiders interest in quarterback prospects in the draft and their fascination with McGloin, the Pryor trade was a foreseen conclusion.

The Oakland Raiders are lucky to have even gotten a seventh round pick for Pryor. The media and NFL knew Pryor had requested for a trade. It was not a secret that Pryor and Raiders’ head coach Dennis Allen did not mesh well. Pryor’s preference to improvise with running plays always seemed to throw Allen’s game plan for a loop.

Whether or not Pryor succeeds in the league, it was time for the Raiders to move on from Pryor. The team believes in Schaub and McGloin enough that Pryor’s playmaking ability would have wasted on the bench.

It is a shame the Raiders bid the 24-year-old goodbye, because he showed promise in his first few starts.  Sure Pryor struggled in his first season starting, but the Raiders never gave the raw prospect a real chance at growth from the experience the same way other current Pro Bowlers have been given early in their career. The Raiders need offensive playmakers, but they effectively traded away one of their best.

As for the Seahawks, they added a playmaker for a bargain price. Having coached at USC when Pryor was dominating high School and college football, Carroll is familiar with the type of person Pryor is. Seeing an inevitable release from the Raiders, the Seahawks would not have given the Raiders a draft pick for Pryor if they didn’t think he added something to their team.

Until the  Raiders, Pryor never had anyone work on his quarterback mechanics. Having relied on his athletic ability throughout his playing career, Pryor had a substantial learning curve. Yet Pryor’s god-given talent and size makes his ceiling unlimited.

Even with the turmoil in Oakland, Pryor never complained or made excuses. He showed his skin as a true competitor and deserves to be in a situation where he can develop as a quarterback.

Pryor joins a unique Seahawks’ culture which inspires competition, at every level. No, Pryor will not end up as the starter, because that is young phenom Russell Wilson’s job. Yet, Pryor could easily unseed Tarvaris Jackson as the back-up, and excel if Wilson were ever to go down with an injury.

Added, Pryor’s unique skillset gives the Seahawks another running option in scoring situations. Plus, his size and ability resembles a quarterback the Seahawks play twice a year in San Francisco 49er’s Colin Kaepernick. The Seahawks can use Pryor’s dual-threat skills to prepare for their division rivals, the 49ers.

Seattle offers a scenario for Pryor that he never had in Oakland. Pryor finally has an opportunity to develop. Not only does the Seahawk’s offense suit Pryor’s ability, but he can learn from Carroll and Wilson without pressure to produce. Either Way, Pryor’s opportunity in Seattle may be his last chance to live up to the hype generated from his playing days at Ohio State.

Even if Pryor does not fit with the Seahawks, and they are unable to utilize his potential then they can simply cut him. The Pryor trade offers Seattle a high-reward playmaker at a low-risk price.