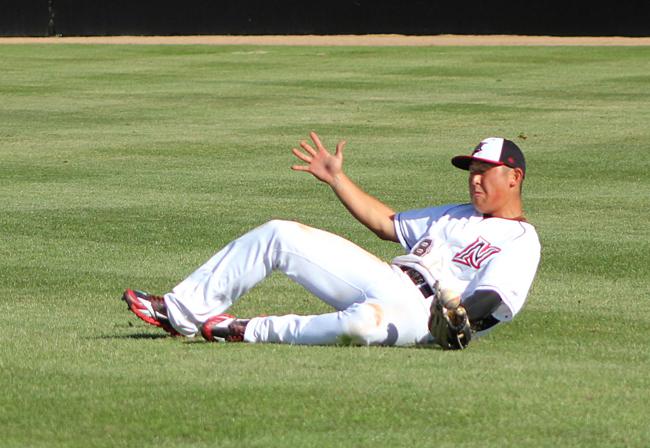 A big inning for San Diego State (29-12) spelled doom for the Matadors (15-25) Tuesday, as CSUN gave up six runs in the bottom of the third inning en route to a 7-5 loss to the San Diego State Aztecs at Tony Gwynn Stadium.

After two three-and-out innings to begin the game, sophomore starting right-handed pitcher Jordan Johnson gave up five hits including two triples in a third inning that gave the Aztecs all the runs they needed. With runners on second and first with one out, junior outfielder Greg Allen smacked a 2-1 pitch to left field for a triple, giving San Diego State a 2-0 lead.

On another 2-1 count, senior infielder Tim Zier singled past Johnson up the middle, bringing home Allen for a 3-0 lead. Star sophomore infielder Ty France singled to give sophomore outfielder Seby Zavala another two-on one out situation, in which he promptly hit the second triple of the inning to increase his team’s lead to 5-0. Two fly outs, including one that scored a man from third, would end the inning, but the damage had been done.

Senior outfielder Ranny Lowe would open up CSUN’s first scoring opportunity, as he singled with one out in the top of the fifth inning off of freshman right-handed starter Cody Thompson. One more out later, junior outfielder Chester Pak singled and advanced to second base after an error by Zavala in left field, which allowed the speedster Lowe to score from first base.

CSUN strung together another single and walk by junior catcher Nick Murphy and freshman designated hitter Dylan Alexander to load the bases. San Diego State head coach Tony Gwynn quickly brought in senior right-handed reliever TJ Kendzora to extinguish the rally, as he got junior left fielder Nick Blaser to pop up to end the inning.

Although freshman left-handed pitcher Kenny Rosenberg entered the game in the top of the sixth inning to relieve the struggling Johnson, he was unable to escape the inning unscathed as France singled home Allen who advanced from first to third on a stolen base and throwing error only one batter earlier.

The Matadors would eventually tag Kendzora for a run as Pak singled in pinch runner junior Nico Garbella in the top of the seventh inning, but they still trailed 7-2 at that point.

Trailing by five runs in the ninth inning, CSUN would show signs of life as they rallied for three late runs. With two outs, the Matadors were able to load the bases for freshman pinch hitter AB Blanchet, who in only his 18th at bat of his career drew a walk to bring in CSUN’s third run of the game. The Aztecs quickly brought in junior closer Michael Cederoth to help get the final out, but not before Blaser smacked a bases loaded double to give CSUN two more runs. With the tying run at the plate, junior third baseman Michael Livingston struck out on three straight pitches to end the game.

The Matadors will stay on the road and head to Forth Worth, Texas to take on the No. 23 TCU Horned Frogs for a three game series beginning Friday at 6:30 p.m.