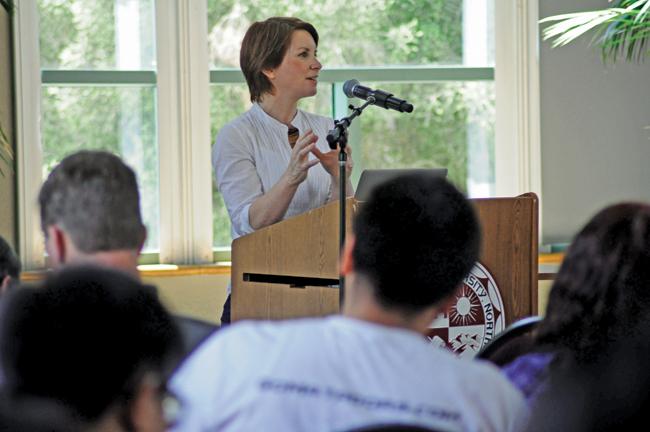 Emma Cohen, a professor at the Institute of Cognitive and Evolutionary Anthropology at the University of Oxford, discussed her research on the correlation between social bonding and group exercise today in the Grand Salon.

The lecture, Brains, Brawn and Social Bonds: Evolutionary and Psychological Perspectives on Group Exercise, presented Cohen’s research and observations in answering the question, “what is the role of group exercise in social bonding?”

During the lecture, Cohen, who hypothesized “certain forms of group exercise forge and maintain strong social bonds,” said her conclusions were based off five main points, which explained the persistence of these activities in culture.

In one of Cohen’s main points, she discussed how group exercise sustains motivation and reduces perception of pain.

Using data from rowers at Oxford, Cohen measured their pain thresholds when rowing individually and as part of a group.

Cohen found that in a group setting, rowers had a much greater pain threshold than in a solo situation.

Cohen said her findings lend credence to the idea that groups bonding together compete better.

“In making exercise rewarding by adding people into the mix, sustained group exercise combines the rewards of enjoying the pleasure of people’s company and the rewards of exercise,” Cohen said. “Having other people around you serves a cue.”

Cohen also made points about the history and cultural nature of group exercise, which stated that sustained exercise is evolutionarily ancient and culturally widespread, such as distance running, which is an activity that has spanned over 1.8 million years.

Cohen said her research considered how the endocannabinoid system and opioidergic mechanisms produce the sensation.

In the case of the rowers, duplicating movements causes the participants to try harder for one another.

Cohen said that the synchronous movements foster increased cooperation because there is the shared objective.

With the drummers, Cohen said that the absence of the shared movements and mentality shows how group activities do not forge the same bond when they are not working together.