A renewable energy economy is possible and needed for our future 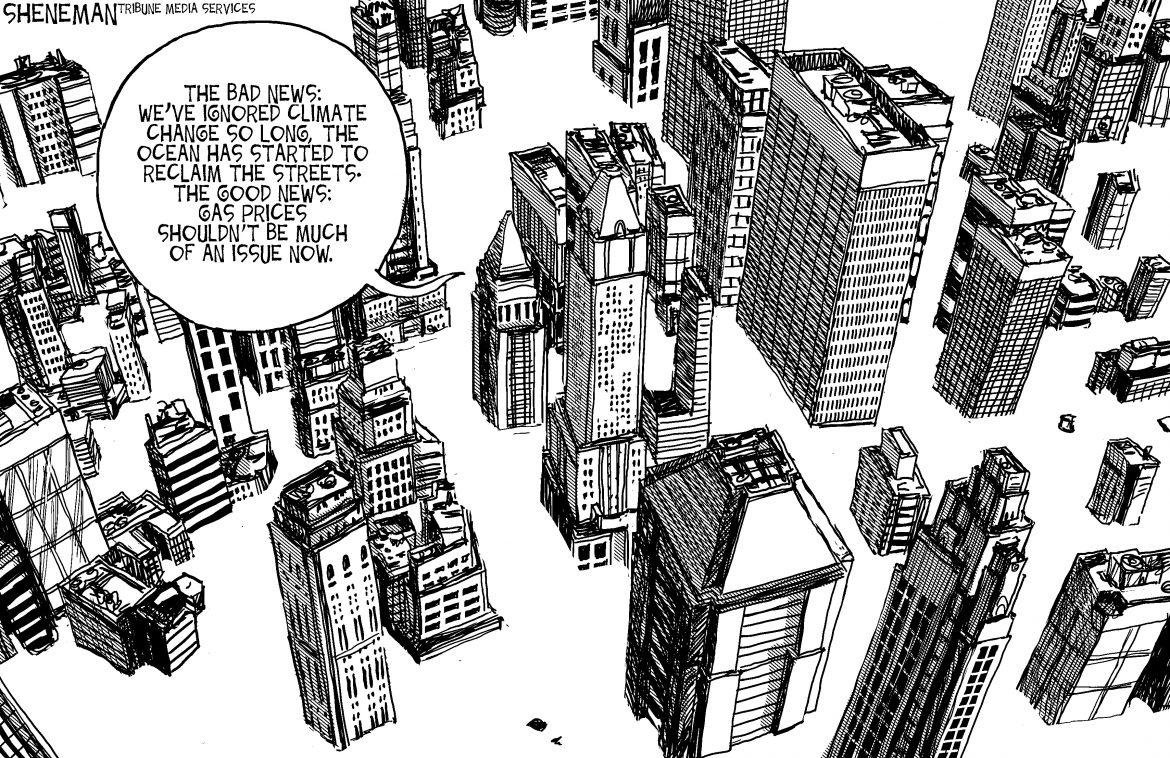 Trillions of dollars have gone to bailout Wall Street fraudsters, provide tax-breaks for the wealthy, maintain our military and the pointless wars and operations since Sept. 11. If we have this kind of money to undermine our democracy and promote inequality and destruction on a massive scale, we could easily come up with with the money to build a clean energy economy that is overflowing with well-paying jobs and is truly sustainable for our environment.

For starters, we could start by clawing back some of our lost money with a large wealth tax on individuals with over $100 million in assets. We could reestablish the tax rates used during the 1950s when the highest marginal tax rate for the wealthy was at  91 percent of their earnings (say, above $1 million a year now). We can also treat capital gains as regular income, invoke a Wall Street speculation tax, close corporate loopholes, tax avoidance schemes and end corporate welfare for polluters.

Additionally, states could establish state-owned public banks, as North Dakota has done successfully since 1919. The federal government and states need to stop paying private financial interests to finance their borrowing and deficits. The billions in savings could help finance clean energy programs.

This would save, not cost, about $5 trillion over the next 50 years, according to energy expert Amory Lovins of the Rocky Mountain Institute. His expertise has landed him contracts with both the Pentagon and Walmart, among other mega-institutions that are intent on saving money and energy by way of efficiency and renewable energy technologies.

The world’s economy needs to move towards a hyper-efficient and renewable energy economy faster than the present path that it is on. Why?  Because we need to address the disastrous climate change that is already wreaking havoc on our planet.

Many world-renown scientists and engineers have determined that close to 100 percent of clean energy economy is within reach starting with present off-the-shelf technologies.

Mark Z. Jacobson, director at and senior fellow with the Stanford Woods Institute for the Environment and the Precourt Institute for Energy, has determined that the world and the US economy could be entirely run on renewable energy with efficiency playing a key role.

He and other engineering colleagues at UC Davis and Cornell University show that a renewable energy economy would be less expensive, more reliable, create more jobs and save billions of dollars.

“Converting to wind, water and sunlight is feasible, will stabilize costs of energy and will produce jobs while reducing health and climate damage,” said Jacobson, a professor of civil and environmental engineering, in the Stanford News.

Jacobson’s 2009 Stanford University study determined that the best options in terms of individual and collective impacts on global warming is pollution, wildlife, water use, land and wind use, solar, geothermal, tidal and hydro-electric were ranked highest.

Nuclear power, coal, ethanol, oil and natural gas were ranked lowest. Battery-powered electric and hydrogen fuel-cell vehicles could largely eliminate pollution from the transportation sectors, as reported in the Scientific American magazine back in October 2009.

Jacobson recently unveiled a 50 state clean energy plan at the annual meeting of the American Association for the Advancement of Science in Chicago, detailing the many benefits including job creation and positive health outcomes.

A recent report commissioned by the UN and Bloomberg New Energy Finance indicates that renewable energy sources such as solar and wind are increasingly showing positive market signals. They are developing at a rapid pace worldwide.

Energy experts associated with the Renewables 100 Policy Institute gathered on April 16 last year in San Francisco for their first ever international conference, Pathways to 100% Renewable Energy. Dozens of scientists, policy makers and others showed how a 100 percent renewable energy economy could be achieved.

Republican mayor of the City of Lancaster, R. Rex Parris, spoke at the conference about the “asteroid” heading towards the earth in the form of climate change and has been actively working on making Lancaster the “solar capital of the world.”

Germany is planning to receive 80 percent of their energy from renewable sources by 2050 according to germany.info.

Mark Jacobson states that the barriers to achieving a 100 percent renewable energy economy are largely political and social barriers, and not technological or economic.

Science Daily recently published an article about how renewable energy could fully power a large electric grid 99.9 percent of the time by 2030 at costs comparable to today’s electricity expenses, according to new research by the University of Delaware and Delaware Technical Community College.

“These results break the conventional wisdom that renewable energy is too unreliable and expensive,” said co-author Willett Kempton, professor in the School of Marine Science and Policy in University of Delaware’s College of Earth, Ocean, and Environment. “The key is to get the right combination of electricity sources and storage — which we did by an exhaustive search — and to calculate costs correctly.”

Jennifer Francis of Rutgers University and other scientists have theorized that the warming of the Artic region has drastically altered weather patterns worldwide. They think that this might be causing the jet stream to stall out, bringing unwelcome weather such as serious flooding downpours or extended heat waves and cold snaps. These events show the predicted result of weather induced disasters. Additionally, methane continues to be released at an ever-increasing rate in the northern latitudes, where most of global warming has occurred, causing grave concern among many scientists.

Independent scientific institutions, such as the Union of Concerned Scientists, continue to counter propaganda and misinformation coming from fossil fuel-supported institutions. These institutions deny the facts surrounding climate change and undermine alternative energy solutions by literally using techniques developed by the tobacco industry, which successfully denied the health effects of their product for years.

Climate science continues to be distorted and underreported by many in the media, with the dire effects underestimated by scientists themselves according to climate expert Michael Mann, in a recent interview with Scientific American.

Former University of Arizona professor and scientist Guy McPherson’s website Nature Bats Last details the perils facing humanity and much of the world’s living creatures and habitats as a result of chaotic climate change. Although he predicts imminent human extinction, he still encourages people to stand up and fight for a more just and truly sustainable world.

The technology is there for us to make the needed changes to create what longtime writer/activist Harvey Wasserman has advocated for, a Solartopia, but not the political will. Maybe it will take thousands or millions to take to the streets, or show up at their legislators’ offices, or campaign events. This might be just around the corner.