Women’s Tennis: Lin transitions smoothly on and off the court 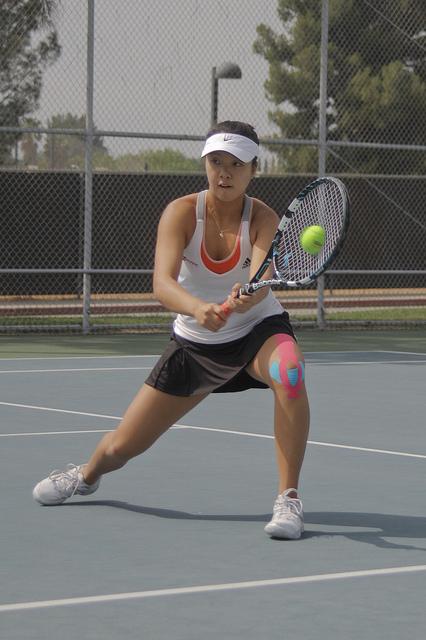 CSUN’s tennis team has been home to the most dangerous backhand in the west this year, and it belongs to a freshman.

With two Big West Tennis Athlete of the Week awards in her first season of playing tennis in the US, Vivian Lin has adjusted well on the courts in Northridge.

“The coach and my teammates said very few players can earn this title in a short period,” Lin said. “I was very happy because I earn recognition for my tennis skills.”

Lin said she had a great desire to study in the United States when she was a child.

Lin discovered CSUN when her tennis coach in Hong Kong took an annual summer trip to the United States with his players.

“I joined the tour last summer, and I saw different US colleges and met different tennis coaches,” Lin said. “I went to CSUN, and I loved it very much.”

Gary Victor, women’s tennis head coach, also played an important role in her decision to continue her education in the US.

“When I went to CSUN, I met our head coach Gary Victor,” Lin said. “He thought I would have much potential in playing tennis in there, and then we kept in touch with each other, and finally I came here.”

Criss Rodriguez, Lin’s doubles partner, acknowledges that Lin has been a very important part of their team.

“She is a great doubles partner as well as a great player,” Rodriguez said. “We have a great chemistry in the court and we understand each other very well.”

“We lost to that team since it was the first match we played as a team,” Rodriguez said. “And later on we played them and we performed so good, that is our biggest win.”

Victor said Lin is an outstanding athlete, and the best part of her game is her “unbelievable” backhand, commenting that it was potentially one of the strongest he’s seen in the western part of the country.

“She is a very good mover, and she can change her direction exceptionally well,” Victor said. “She has a lot of good things like solid forehand, but the strongest would be her backhand.”

Although English is not her first language, Lin said the language barrier didn’t carry a great impact on her life.

“My coach in Hong Kong is a foreign coach, and I was studying in a secondary school that provides education in English,” Lin said.

Lin added that it didn’t feel hard to adjust her life in the US because of her teammates.

“I live with my teammates, and we communicate with one another very well,” Lin said. “I feel we are living in a family, and therefore it is not very different from my life in Hong Kong.”

Victor agreed Lin didn’t have much difficulty in adapting the new environment.

“We have 10 players with six new girls, and they bond with each other incredibly well,” Victor said. “They care about each other, and they want to do the right thing for each other. Their sisterhood makes her adjustment go really smoothly.”

According to Lin, tennis playing runs in her family.

“My mother and father both play tennis, and they met each other at tennis court,” Lin said. “Because of their influence, I started playing tennis when I was two, and I began to learn how to play tennis at school when I was six.”

Lin said there is a large difference between tennis players in Hong Kong and the United States.

“In Hong Kong, the players are powerful, and they always hit flat shots,” Lin said. “On the other hand, the US players hit more topspins, and they are taller and have better strength.”

Overall, Lin believes US players are stronger than players in Hong Kong, but she emphasized that she will try her best to play well against them in every game.

Victor said he hopes that Lin continues to grow as an athlete, and she always has fun on the tennis court at the same time.

“I think Vivian can be as good as Vivian wants to be,” Victor said. “But I really want tennis to be fun for her, and it doesn’t feel something that is just a job.”