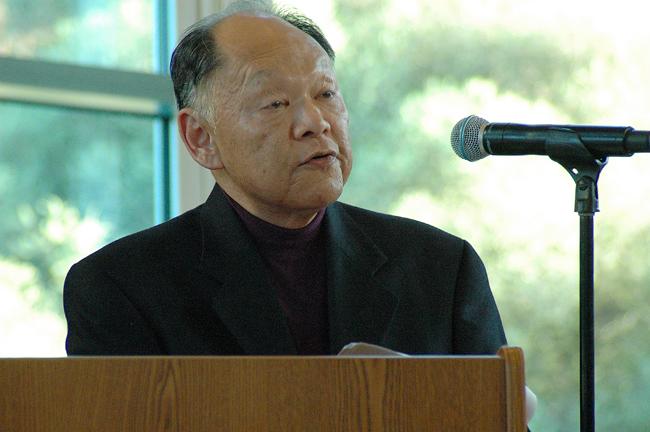 The event kicked off with professor and Master of Ceremonies Allan Aquino welcoming the students along with their families, friends and invited guests.

CSUN’s Jishin Taiko Ensemble, a club at CSUN with a passion in taiko drumming and Japanese culture put on a performance to provide guests with opening entertainment.

Omatsu was welcomed with loud applause by those in attendance as he was introduced. He gave his presentation on the importance of not just Asian American Studies, but ethnic studies in general and the positive impacts they have in our communities.

During part of his presentation Omatsu said students need to think creatively and help bring Asian American studies to those less fortunate. He was also proud to be a part of the celebration to see students in the department get recognized in front of their friends and families.

“The awards are important because a lot of times what happens is university’s student achievements and student works and services are not recognized,” Omatsu said. “The department of Asian American studies has long regarded students as important and so what better way to celebrate student accomplishments than giving them awards.”

Gina Masquesmay, Asian American studies department chair, was glad to be able to have Omatsu at the event to address students and said it was important because he was one of the founding fathers of Asian American Studies.

“Asian American Studies looks to honor someone in the community who can inspire students so we bring in somebody, and this time we have our own Professor Glenn Omatsu.”

“The importance of this event is it gives the Asian American Studies students something to strive for,” Kann said. “It reminds us of the core values and it reminds us of what we need to do and what world we should be on.”

Senior Asian American studies major Gerita White was one of two recipients of the Donna Kawatomoto Special Achievement Award. She plans to eventually go to either graduate or medical school because she plans to be a cardiac surgeon.

“This award was extremely important because it’s a long road and also it made me more aware of who I am as a multi-ethnic person, as well as a female and it empowered me and inspired me to still achieve,” said White.