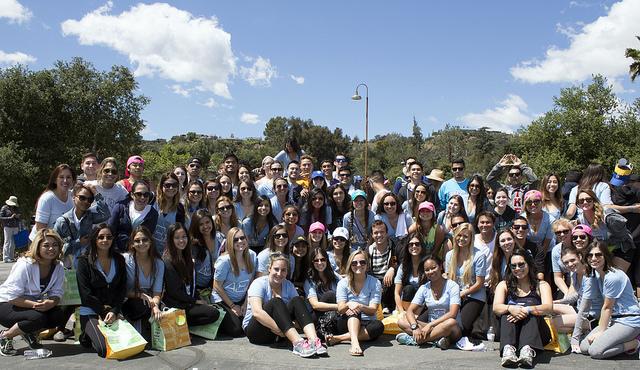 The sisters Alpha Xi Delta for the CSUN chapter brought over 100 people to the "Walk now for Autism Speaks" event at the Rose Bowl on April 26, 2014. The sorority's goal is to raise $32,000 for Autism Speaks. Photo credit by Trevor Stamp

Dressed in blue clothing, a group of 122 women, along with 92 other individuals who pledged to join their team, walked to support Autism Awareness Month. Around the country, fundraisers of all kinds are held, educating individuals on the seriousness of the disorder.

On Saturday, April 26 at 9 a.m., the sisters of CSUN’s Alpha Xi Delta (AXD) chapter attended the Walk Now for Autism Speaks event, hosted by the organization Autism Speaks at the Rose Bowl in Pasadena.

One in 68 children are diagnosed with Autism Spectrum Disorder (ASD), and it is five times more common to occur in boys than girls, according to the Center for Disease Control and Prevention (CDC).

“(Autism) is still the most prevalent disorder and it’s still the most underfunded and least known about,” said Bree Breckenridge, 23, a graduating senior and philanthropy chair for the AXD chapter at CSUN.

The Alpha Xi Delta sorority is known nationally as an Autism Speaks’ partner, and all members adhere to the cause, and encourage the CSUN community to participate.

“We’ve invited all of the fraternities and sororities to join our team,” said Lindsey Thompson, president of the CSUN chapter.

Thompson, 20, a junior majoring in kinesiology, said sisters usually join with prior knowledge about the chapter and their relationship in supporting autism awareness. Even if sisters are not informed, they instantly create a bond with the philanthropic aspect of the sorority.

“Last year we invited families who are affected by autism,” Thompson said. “It gives meaning to all the fundraising. This keeps us going, knowing that we’re making a difference.”

During World Autism Awareness Day on April 2, the chapter tabled on campus to raise awareness and invite the CSUN community to join their team. They constructed a kissing booth and gave away Hershey’s kisses with autism facts on them.

“My nephew and my neice are both affected by autism so this philanthropy really hits home,” said Breckenridge, who is also part of other organizations similar to Autism Speaks.  “It’s really touching to see my sisters back me up.”

Thompson previously work at a summer day camp for children with developmental disorders before attending CSUN.

“The main (disorder) was autism,” Thompson said. “This is why on (Alpha Xi Delta) recruitment day I was instantly hooked.”

All 122 women of CSUN’s Alpha Xi Delta chapter signed up for the walk.

“We encourage sisters and the greek community to donate on our page as well, for our philanthropy,” Thompson said.

The chapter fundraises year-round for the Autism Speaks Walk, starting with their donation page. Throughout the year, each member of the chapter is responsible for raising money by encouraging their friends and family members to donate. Local restaurants, such as Elephant Bar and PizzaRev, also participate in the donation process.

The ladies also fundraise at their silent auction. This year it was held on campus, and they were able to raise $5,000 for their Walk Now for Autism Speaks team alone.

In total, they have raised $6,381 in contributions, according to their fundraising page. However, the ladies are confident that they will be able to surpass last year’s amount of $31,000.

Beginning April 22 through April 25, AXD hosted a week-long challenge, dubbed the Amaxing Challenge, or the Xi Olympics.  Fraternities will compete against each other in activities consisting a variety of challenges, mainly designed to teach the participants more about ASD.

Some of the challenges that the fraternities will take part in include a talent show, a cornhole toss competition, a trivia series about autism facts and a day-long triathlon.

To enter the competition, each fraternity pays a fee of $60. Then, an Alpha Xi Delta member assigned to that chapter will act as a coach, who is also responsible for donating an additional $10 to the $25 that each sister has to donate to the page.

Although their male counterparts are in solidarity with their Greek sisters for the cause, Breckenridge said that they also do it for the love of competition.

“It’s just fun for them,” Thompson said. “They get a really nice shiny trophy and they love participating because they’re very competitive.”

The fraternities achieve points throughout the competition, and extra points if they join the Walk Now for Autism Speaks team.

“A hundred percent of what we get goes straight to our team of Autism Speaks,” Breckenridge said. “None of it will go to our chapter.”

Thompson and Breckenridge agreed that joining the sorority was the best decision they could have made.

“The reason why I joined Alpha Xi Delta was because of their relationship with Autism Speaks and how close I saw every single sister supporting such an amazing cause,” Breckenridge said. “That was when I knew this was much more than a sorority.”

The sorority has raised over $2 million in total at a national level for autism research and awareness. The CSUN chapter is the third largest contributor for the national chapter.