Taming the jitters of public speaking 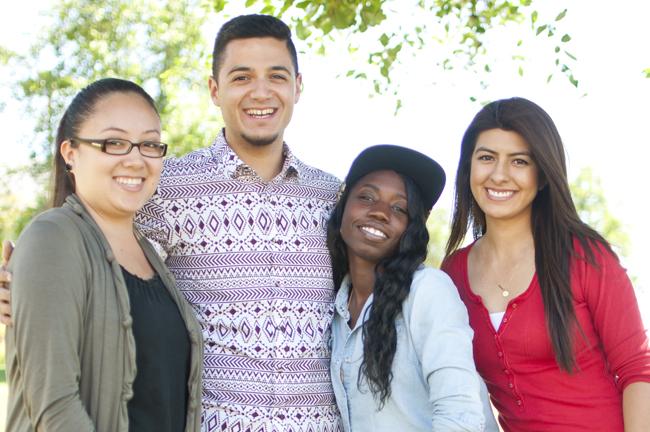 Breathe. Focus. Take your time. Speak clearly. Stand tall. Make eye contact. Sweaty palms and a knotted throat. Listen to the magnified taps of feet. Watch the clock smooth its hands over every increment and avoid the blur of glares at all cost. The knots, the taps, the thumps and the ripples of uninviting glares all condense into yet another unsuccessful attempt at quieting public speaking anxiety.

The Communication for Youth Institute (CYI) at CSUN addresses these extremely common public speaking anxieties, and offers students from urban areas free public speaking training. The ability to master public speaking is beneficial and applicable to nearly every life situation.

CSUN students majoring in communications intern through this community-service learning program and are responsible for guiding area youth in grades five through 12 during the 12-week-long course held each Saturday from 8:30 a.m. to 11:30 a.m. Topics covered range from nonverbal delivery, vocal variety, audience analysis and cover the major types of speeches.

Approximately 45 students arrive each Saturday from over six schools scattered throughout the Los Angeles County.

The goal of the program is to reach the overlooked communities in the area, said CYI director Josefa Gonzalez. Some students arrive from neighborhoods with high rates of gang violence, an environment which fails to foster the same opportunities as schools in other areas.

“I think that the way we can reach these communities is by continuing to spread awareness about the importance of developing communication skills at a young age and look for participants,” Gonzalez said. “The sooner the better.”

Although a focus on public speaking is central to this program, students are also able to dabble with the idea of attending college, something they might not have considered prior to enrolling in the program.

“Making college life real to them is one of the features of what we’re doing here,” Gonzalez said. “If you’re on a college campus and you’re taking a class with college students you’re essentially a college student yourself and that lifts them a little bit. I really feel like they start to believe it.”

Interns form a special bond with the class; they watch students grow in an almost parental manner, proudly pointing out their protégé, applauding them for their efforts while giving them direct feedback on how to improve their speeches.

During break, the bubbly middle schoolers group outside Manzanita Hall and describe their struggles with public speaking. It was clear that, though the problem is rampant and unique to each child, it is fixable and only practice helps shape them into more confident and outspoken adults.

“When I was younger even when family would come I would hide under the table and not talk to them so it was hard coming here,” said 14-year-old Abril Carrera, a Smidt Tech High School student.

The students proceeded to deliver “how-to” speeches in front of class which allowed them to cover the topic of their choice. Speeches ranged from hands-on instructions for making rubber bracelets and performing card tricks to surviving in the wild and completing kickflips on a skateboard. This unique approach allows for greater engagement from students who aren’t always given the freedom to express themselves in a classroom setting.

Whitney Hudson, 27, senior communications major and intern for the program workshops, explains that the most important lesson students take with them after attending this class would be their ability to stay optimistic and open-minded despite the obstacles they might face.

Hudson relates to some of the fears students experience when speaking in front of a group of people.

“They (students) tell me ‘you’re so confident’ and I say trust me, I am not as confident as you think I am,” Hudson said. “I’m a good actor. It is hard getting up there in front of people that you don’t know, but I always try to talk them through it and encourage them.”

Although public speaking skills touch on the development of critical thinking, verbal and nonverbal abilities attaining those skills requires persistence and courage traits that develop with experience.

“(When) a lot of them start, they’re scared and say, ‘I can’t do it’ and I tell them ‘yes you can you’re going to have to try, not be afraid and the result might be even better than you think,” Hudson said. “ It is hard being up there. If you keep encouraging them and giving them some praise it helps and it keeps them wanting to come back.”

Student speeches conclude and Hudson delivers a sentimental speech of her own.

“I’m so proud of you guys right now, I have seen you grow and I’m going to miss you next week,” Hudson said.

She endearingly referred to the students as her “adopted kids.” The CYI celebrates its 15-year anniversary and as this session comes to an end this month, students leave a little more confident, outspoken, and more aware of college life which can contribute to shaping their future.