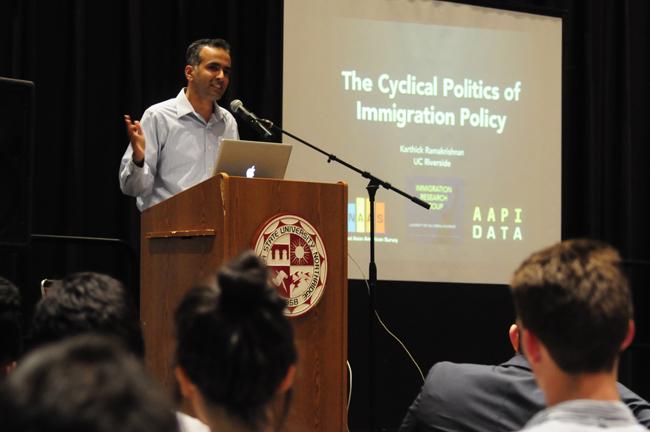 Karthic Ramakrishnan from the University of California, Riverside gives a lecture at the Central American Studies lecture at the Northridge Center on April 28. (Photo Credit: David J. Hawkins/Photo Editor)

Student activism was one of the panel discussions held by the Central American studies department as part of a symposium on migration at the Northridge Center on April 28.

As a result of the bill passing, many people attempted to shut down a program called Operation Streamline. This program provides fast-track prosecutions, along with group hearings from arrest to jail time in one day. They have a quota of 70 people a day to pass the assembly line.

“This is a dehumanizing process for the budget,” Gonzalez said. “People are chained and handcuffed like animals.” he said SB1070 has caused tension in his community.

Jocelyn Duarte, graduate from CSU Los Angeles, has also participated in helping recent migrants. Duarte participates in the Central American Resource Center (CARECEN), located in the Westlake area of Los Angeles, where she holds a class for migrants to help them obtain their citizenship.

CARECEN, which was founded in 1983, has services which have helped more than 700 students with obtaining citizenship. “As immigrants, they believe that being a citizen means they are included, and that is important to them,” Duarte said.

Duarte encourages her students to become civically engaged and  participate in their local city council meetings, or join the PTA.

“We also talk a lot about the voting process,” Duarte said. “To some of us it might be something very simple, but for some of these immigrants it can be something important.”

In her class, students also choose topics related to them that they wish to follow, such as immigration reform. They keep up with  cases on a daily basis and engage in dialogue to make connections to understand how they can become part of the process.

“I ultimately want to provide a space for adults to learn,” Duarte said. “I want to empower people through knowledge.”

Cathie Pacheco, a CSUN alumna and graduate student from University of Arizona, has also set out to empower people with knowledge. Pacheco has been a part of the Rainbow Defense Fund, an organization that supports LGBTQ migrants being held in detention facilities and prisons.

Pacheco wants to help the LGBTQ community of immigrants because she feels they are marginalized. The Rainbow Defense fund helps raise funds toward the bail of the detained, gather evidence for their case, and provide emotional support for the LGBTQ detainees.

Many LGBTQ detainees have also reported being mistreated while imprisoned. Some have been abused, malnourished, and some have even died because of their mistreatment.

Pacheco has worked with the Rainbow Defense Fund to help individuals in need of legal help.

The Student-Alumni panel concluded with the participants urging students to become active regarding different forms of immigration reform and helping recent migrants.