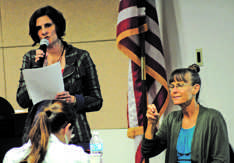 Author Teresa Langle de Paz speaks about how world peace can not be achieved until gender equity is a thing of the past during the Sex in the Library lecture series (Photo Credit: Ana Rodriguez / Assistant Photo Editor)

Teresa Langle de Paz, founder and co-director of Women’s Knowledge International, spoke about how women and the feminist emotion could be used as a building block for peace as part of the Sex in the Library presentations.

While Langle de Paz studied 17th century Spanish literature and history, she began to read female writers and complained about misogynistic beliefs of their times. It was then when she began to read between the lines.

“In my book (Rebelion Sigilosa), I engage in political discussion with a wide range of feminist theories and critiques to conclude that feminist emotion manifested a spark of rebellion everywhere, literature, social behavior, etc,” Langle de Paz said. “But, these sparks contain information about how to overcome and subverge situated gender prescriptions.”

Langle de Paz believes that as long as a woman emotionally resists and rebels against gender prescriptions, she is a feminist, regardless if she is aware of it or not.

“In the second stage of my career, I became convinced that there was much more to the horrific surface of specific forms of gender based violence and oppression,” said Langle de Paz. “Thus, I accordingly [thought about] grammatically revaluing the notion of emotions as a political source of individual and political change for feminists.”

Because of the high risk of violence against women, Langle de Paz argues that world peace is not possible without taking gender equality into account.

“We need gender analysis that include emotional forms or criticism in order to reduce violence and advance justice,” she said.

“Knowledge that is being expressed in and out of focus about how women deal with and overcome infinite manifestations of gender oppression and how they view affiliations to counterbalance oppression and discrimination,” Langle de Paz said.

“The first half (of the presentation) related to what I am studying in the class, (but) this section is new to me,” she said.

Zoie Kujawa, 20, gender and women’s studies junior, was one of many students who helped organize that portion of the event.

“We’ve been planning it since the very beginning of the semester, since our first day of class,” said Kujawa.

“I think on that first day is when we separated into all the different committees that we knew we were going to need, [such as] the food committee, the advertising committee, the program committee, things like that,” Kujawa said.

The Sex in the Library lecture series continues tomorrow with a presentation about the transgender movement and history at 5 p.m. in the Ferman Presentation room of the Oviatt Library.