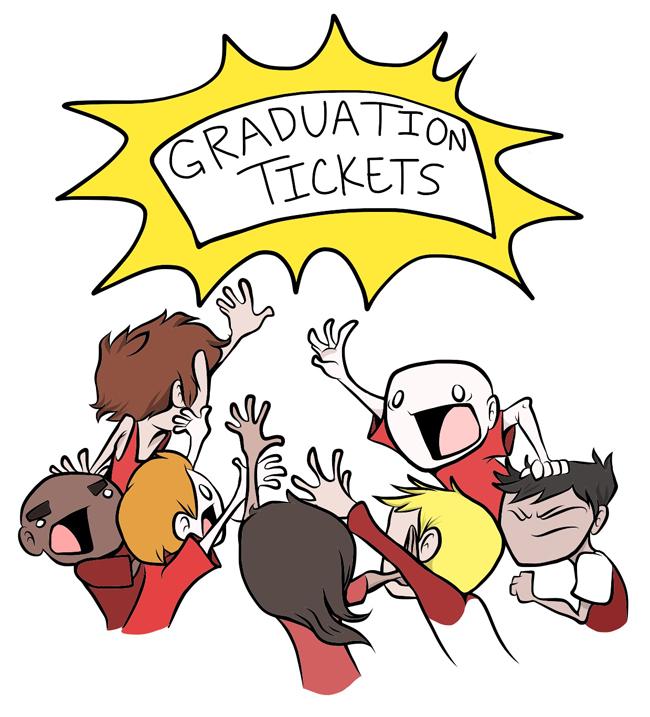 Despite concerns regarding the awarding of Commencement 2014 tickets due to deadline confusion, students who contacted the Office of Involvement and Development have now been contacted and awarded their desired number of tickets.

Tickets to attend commencement were to be claimed by students prior to April 14 via Ticketmaster. However, some students didn’t get the chance to do so and others encountered problems while printing.

“I’m not really interested in going if my parents aren’t able to go,” said Fernando Gutierrez, 25, business management major. “That’s the whole point of the ceremony.”

By the time Gutierrez found out about the deadline, he was too late.

“I work a lot and go to school,” Gutierrez said. “Checking my CSUN email is the last thing on my mind, especially now that I’m graduating.”

Gutierrez contacted the Office of Involvement as soon as he found out about the deadline. He was sent an email April 24th informing him that he was able to login to the Ticketmaster site and claim his tickets.

This is the first year that CSUN makes this kind of electronic ticketing service available for a commencement ceremony.

Astrid Delgado, 22, cinema and television arts major, said there were some some holes in the process.

“It sounds like it should work but it doesn’t,” she said.

Delgado initially claimed the tickets when she received the email, but had trouble printing them. The second and third time she attempted to do so, she was not able to log back into the site.

Like Gutierrez, Delgado also received an email from the office allowing her to claim her tickets but she said that the process was not simple.

“The process even before the deadline was a pain in the ass, it wasn’t a very straight forward process, even when looking at the email that explained the whole process,” Delgado said.

Students who reported to the Office of Involvement, either in person, on the phone or by email, about not making the deadline or not being able to print their tickets have received an email notifying them that their concern has been resolved.

“Over 300 concerns were addressed through the Ticketmaster website,” said Thomas Piernik, director of the Office of Student Involvement and Development. Piernik is also head of the Commencement Planning Committee. The concerns addressed are only considering the students who contacted the office.

“If someone didn’t report anything and never responded to anything, we don’t know there’s a problem there,” said Piernik.

Prior to addressing each individual concern of the students, the administration and the Commencement Planning Committee were unclear as to what to address.

The first question was whether  to send an email to students who did not make the deadline for claiming their tickets. If this was not addressed, then the next issue was to identify the number of extra tickets that could be distributed to those students who requested additional tickets.

In past ceremonies, the committee advised all students should only invite three to five guests. This was the same idea that the administration based upon when identifying the quantity of tickets to be made available for students.

“We worked naively with those numbers,” said Piernik, who stated that, according to the numbers provided by Ticketmaster, students were averaging five additional tickets.

Over the past years, CSUN has had a growing number of graduates attend the commencement ceremony, an increasing number of close to 70 percent, Piernik said.

Piernik said since the percentage of student attendance at commencement is never at full capacity, the committee cannot assume that all students who did not respond to the initial email want to attend their graduation ceremony.

“What happened is that we put a limit on tickets,” Piernik said. “We as a committee had no idea whether students would say, with that consistency: ‘Seven tickets. I want seven tickets.’”

According to the report from Ticketmaster, more than 60,000 tickets had been claimed as of April 14. Piernik agrees that this process is much more complex than they had anticipated.

“We now know how many students are left for each ceremony… We can now go back to the students and tell them, ‘here are the additional tickets you requested,’” said Piernik.

Piernik said some students  never opened the email that was sent on March 18, less than a month before the deadline, or they weren’t aware that the email in question existed.

Piernik agrees that a lot more could have been done to remind the students about the process. However, he questions those who didn’t bother opening the notification and whether or not they would have ever responded to a follow up email.

A list of names has been compiled of all students who contacted the committee regarding the problem. Some of these students attempted to access the site the same night of the deadline, which was not a sufficient amount of time to process the request.

“I’m not trying to bash those students, but I, too, want to give those students who tried to honor that deadline a fair shot to go back in and claim the tickets that they want,” Piernik said.

He said if he were given the opportunity to do so, he would have sent out reminders to students.

“I think more connectivity is asked for from our students,” Piernik said.

Several students in Delgado’s situation have been contacting the committee, either by email or in person, requesting access into the site.

William Watkins, vice president of student affairs, assured that all students who raised concerns about tickets were being directed to the Commencement Committee would receive a notification by the end of the week.

“The vast majority of our students were able to go online and secure their tickets up to the limit of seven,” said Watkins, via an email interview.

The first time students were informed of the ticket process was during Grad Fest in March. They were told that an email would be sent out a week later where they would receive instructions. Other than that, no other additional notice was provided to the graduating seniors.

Several students attempted to ask for assistance by using the contact form provided on the Ticketmaster website, but the message would be sent back, claiming the address as invalid.

The committee issued an email on the CSUN Commencement page where students could voice their concerns.

The students who addressed their issues with the committee later received an email stating that the number of available tickets were being assessed in order to redistribute to those who missed the deadline. The same email requested that students respond with their contact information so that they may be added to a list.

Delgado said a simpler process would have been to make the tickets printable via the campus student portal, or have them handed out when students pick up their cap and gown. Gutierrez stated that he would have liked for the faculty to be aware of the process and make it mandatory for them to discuss it during class in the future.

“You’re about to graduate and there are one million other things on your mind,” Delgado said. “One email was not enough.”

Delgado also questioned the reason for only one email being sent regarding the ticketing process, compared to a total of four emails sent throughout the month of March regarding Gradfest, even when the event had already passed.

“How would you feel if all of a sudden you’re left with no tickets and you have to tell your family, ‘Hey, I won’t be able to have anyone with me on that day,’” said Delgado.

The process, said Watkins, was decided upon careful consideration among campus staff and other CSUs that had used a ticketing system before.

“We know that there will be things learned about our first implementation that will require further development,” said Watkins.

Piernik said that he is “trying to stay neutral on this.” he said his job is to put questions out there for the administration to decide upon.

“This commencement planning committee is charged with setting into motion and planning and executing the wishes of the president and vice president on these matters,” said Piernik.

The administration is focusing on not going over capacity at each ceremony as well, according to Piernik.

“Students are running out of opportunities,” Piernik said.

Students who have yet to contact the office with their concerns, can do so this week. The commencement committee will also work on awarding the additional tickets to the students who requested them prior to the deadline.