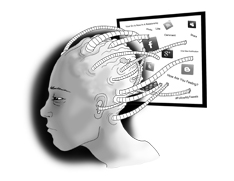 Social media boils down to an emotional whirlwind of status updates, tweets, retweets, selfies, shares, likes and tags. Twitter users tweet 400 million times a day, and over 4.75 billion pieces of content are shared daily on Facebook, according to Zephoria Internet Marketing. This constant influx of personal information and updates can gradually trail into the gray area of what is often described as social media depression.

While studies from the Pew Research Center show that social networks have the potential to promote a sense of inclusion, more recent reports indicate otherwise.

Although networking mediums such as Facebook and Twitter enhance social ties between people, an unhealthy trend of seeking reinforcement can lead to anxiety, social insecurity and lack of confidence according to reports from the University of Michigan.

Veronica Sullivan, staff psychologist at the University Counseling Services (UCS) explains the conflicting studies pertaining to social media and emotional well-being. Sullivan was recently involved in a project called Get Real! CSUN, which dealt with bringing awareness to body image distortion in the media.

Sullivan describes her encounters with students who spend up to three hours a day on Facebook or Instagram. “It can be a huge time waster,” she said. As a result, students are deterred from engaging in more productive activities.

She also suggested this obsession can spark voyeuristic behavior especially after a breakup.

“It can become obsessive, especially as they don’t know the full story, only what can be seen in pictures or status updates,” Sullivan said. “I often suggest trying to avoid an ex’s social media for a while in order to allow some space for the grieving process to happen.”

The development of the Bergen Facebook Addiction Scale (BFAS) illustrates the severity of imploding instances of depression, social insecurity and anxiety resulting from increased use of social media.

In a study of over a billion status updates, The Detecting Emotional Contagion in Massive Social Networks reveals that emotions are contagious. Positive emotions can spark positive reactions and vice versa.

Additionally, a survey by Anxiety UK in 2012 stated that 53 percent of participants said social media sites changed their behavior while 51 percent of these reported the change had been negative.

Surveys and research confirm that increased use of social media can foster negative emotions and skewed perceptions of body image.

Alixan Gorman, TESOL major, confirms these findings with her own observations.

“People use social media to put others down,” Gorman said.” I think they post pictures to seek approval and then they have mixed feelings about how their friends respond to them.”

For the time being, millennials, those born between the 1980s and 2000s, are the ultimate guinea pigs. Their infatuation with social media is scrutinized by researchers and reprimanded by older generations who recommend a break from gadgets and a dose of the outdoors.

“It’s a place that allows for a lot of self-expression, and a great way to share information.  I’ve seen it used in really powerful ways, such as raising money or awareness for important causes.”

She said for people who suffer from social anxiety social media can be a mixed bag.

“I have seen it be a way to ease into social interaction in a way that feels a little less vulnerable, but you have to be careful because it can also become a way for people to avoid real life interaction,” Sullivan said.

Finding a balance between face-to-face interactions and communication through social media is important to maintaining a more positive outlook.

“Social media is certainly not all bad and can be a healthy way to connect with others and to find like-minded individuals,” Sullivan said.

Sullivan said the positive aspect of social media is it allows for self-expression and for ways to share information.

“I’ve seen it used in really powerful ways, such as raising money or awareness for important causes.”

Regardless of the positive outcomes that may come of this, Sullivan said separating social media from real life is an integral part of maintaining that healthy balance.

“It can be difficult but I think that one thing people can do is to remind themselves that what is on social media is not always an accurate representation of that person’s life,” said Sullivan. “The person smiling in that group photo might be struggling right now. “

Sullivan said many people tend to put the best version of themselves on social media.

“It doesn’t reflect the whole picture and can tend to look more ideal than it really is,” she said.

Sullivan offered advice for people who experience negative feelings as a result of being a part of social networks.

“I think if someone is continually feeling bad when engaging in social media, it might be time to take a break from it,” Sullivan said. “Sometimes taking some time off and engaging in real life for a while can give you some perspective.  Take a social media vacation.  A bonus is you’ll suddenly have a lot of extra time you didn’t know you had.”

“Sometimes when we see pictures or tweets or Facebook statuses we were having a good day up until we saw something that made an impact on how we feel,” Corrales said. “From my experience people are very quick to jump to conclusions and make negative comments.”

Whatever impact this has on users is yet to be confirmed and diagnoses are yet to be made. With time, researchers are guided by a generation that will help them determine the true outcome of using social media.