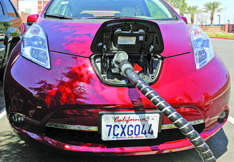 A Nissan LEAF uses one of the two charging stations located in the F5 parking lot, Apr. 21. They are the only fast-charge stations on campus and can charge a drive range between 60 to 80 miles in about 20 minutes. Photo Credit: Lucas Esposito / Daily Sundial

An updated set of electric charging stations were installed on campus in fall of 2013, as part of the campus sustainability plan.

The plan to reduce emissions and pollution was first enabled in fall 2012 by CSUN President Dianne Harrison, through the CSUN Institute for Sustainability and Physical Plant Management.

There are currently eight electric vehicle charging stations on campus. Two stations are located in the F5 parking lot, there are stations in B4, G3 and G9.

Additional stations will be located in B2 and G4 parking lots.

The CSUN Department of Parking and Transportation and the senior design class are working in a joint effort to develop energy efficiency by using solar energy.

Abhijit Mukherjee, faculty director of the Energy Research Center of the College of Engineering and Computer Science, explained how students use alternative energy in the form of solar power in order to bring power to the charging stations.

“Using solar panels to generate electricity all in one place is a better way to tackle the pollution problem”, said Mukherjee.

“The electric car usage has been growing exponentially in recent years,” Mukherjee said. “They are significantly cheaper and more environmentally friendly.”

Out of a registered 31,946,422 vehicles in California about 710,042 are either hybrid or electric vehicles, as of 2013, according to the California Department of Motor Vehicles.

According to the US Department of Transportation Federal Highway Administration (FHWA), 100 mile driving distance is sufficient for more than 90 percent of household vehicle trips in the United States. 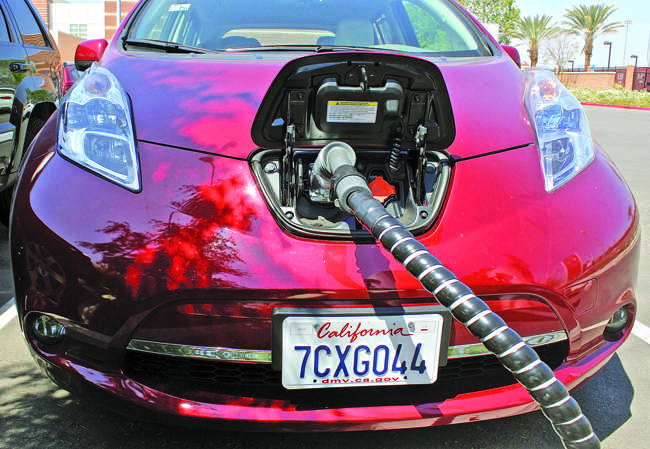 The level two medium speed electric charging stations on campus can produce around 10 to 20 miles per hour of charging, depending on the car brand.

According to the CSUN department of parking and transportation, compatible models include the Nissan LEAF, Chevrolet Volt and most common electric vehicle models.

However, the specific charging time depends of the model type. The Nissan LEAF with a full charge range of 84 miles requires a minimum five hour charge. With 38 mile range, the Chevy Volt, which is a Hybrid model requires a two hour charge time to reach full millage.

The F-5 station is the only fast-charge station on campus, located near the Matador Soccer Field. This station can charge a drive range between 60 to 80 miles in about 20 minutes.

The electric charging stations are free to use to any CSUN student, faculty, or members of the public with a valid parking permit. Every vehicle using the electric station is limited to four hours of usage per day.

Jason Wang, senior director of the physical plant management, noted that the university plans to implement as many as one dozen added stations in the coming years.

“We hope to identify the most suitable locations with power and implement these types of systems as inexpensively as possible”, said Wang.

The university received a grant which covered the purchasing cost of several units not including installation fees.

According to the CSUN Sustainability plan, among the 3,500 faculty and staff and over 35,000 students, “almost 95 percent” commute to campus.

“The cost of electric vehicles are coming down in price, as more begin to cost less and are more within the budget range of a college student we might begin to see more plug in vehicles on campus”, said Logan.

The 2010 study conducted by the CSUN institute for Sustainability also noted that, “74 percent of the faculty, staff, and students who commute to campus travel via single occupancy vehicle—a car, van, or truck. The rate is higher among faculty and staff (85 percent) compared to students (72 percent). Only eight percent commute via public transport (three percent train, five percent bus) and seven percent carpool”.

The Instittue of Sustainability’s long-term goals consist of reducing the number of commuting miles, reducing single occupancy vehicles for commuting and reducing emissions associated with vehicle use on campus.

The action plan seeks to significantly lower vehicle emissions and the negative environmental effects by the year 2023.