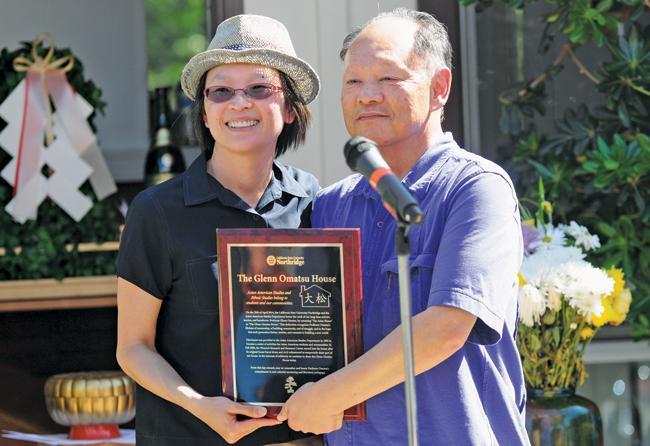 The Asian American Studies (AAS) department held a ceremonial blessing in Glenn Omatsu’s honor by renaming the Asian House after him and recognizing Asian American culture on Tuesday afternoon.

“Think of me as a nontraditional leader,” Omatsu said.

Omatsu said he was humbled the honor.

“I see it as honoring more the people, the students.”

AAS chair Gina Masequesmay began the ceremony by introducing guests of honor who were headed different departments at CSUN. They ranged from the chair of Chicana/o studies, the chair of gender and women’s studies and directors of the extended opportunity program.

“This event highlights the 22nd anniversary of the LA riots,” said Eugene Luzong, CTVA major. “It brings back a lot of liberation for Asian Americans, for equal rights, finding their social identity within other races”

After Reverend Alfred Tsuyuki blessed the renaming of the house, he called upon the invited guests of honor to rotate a shrub with white paper counterclockwise that represented a “symbol of the two hearts.”

The honored guests then clapped twice in a sequence to symbolize their hearts coming together as one.

Speakers of the ceremony elaborated on the Asian American ties in the community due to their long history in the Valley that were mostly in part because of farm families.

According to the speakers, because the San Fernando Valley is diverse, other cultures share some of the same struggles of a history in land loss.

Representatives of the Tataviam Tribe performed a song in reverence to their Indian ancestors and they shared the struggle of land destruction through stories.

In connection to similar Asian American struggles, a member of the Tataviam Tribe spoke.

”We have a lot of rich history through the San Fernando Valley, Indian people who call this their homeland,” the tribe member said.

Students acknowledged Omatsu’s many contributions as a scholar and activist.

Rashita Brown-Elize, a former student of Omatsu’s said, “As a struggling sophomore at CSUN, he saw the potential in me. All the time and years he spent mentoring me. I don’t think any of us could compare to him.”

To commemorate Omatsu’s dedication to his community and students, the audience honored him with a crew union clap to express solidarity. It starts off as a slow clap and ends fast pace with yells of excitement for the speaker.

As the keynote speaker, Omatsu reiterated the main idea that AAS is a shared department among students.

The Glenn Omatsu House is located at 18356 Halstead Ave.