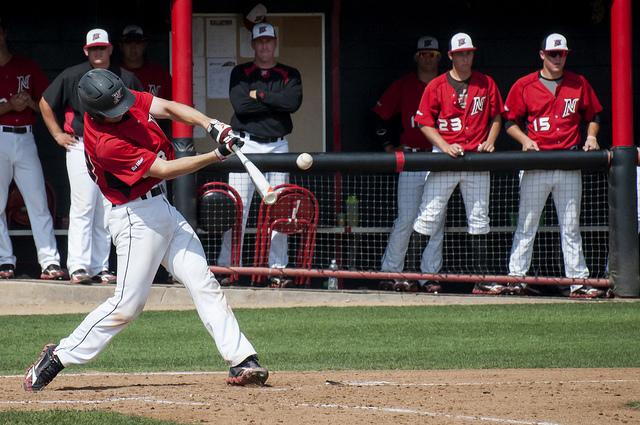 Despite a rough pitching performance by the Matador staff, CSUN (16-28, 4-8 Big West) broke a six game losing streak and won a their fifth road game as they defeated the Cal State Bakersfield Roadrunners (17-26, 9-9 WAC) 9-8 Tuesday at Hardt Field.

Down 8-7 in the top of the eighth inning, the Matadors mounted a rare rally as they scored two late runs to take the lead in Bakersfield. Junior catcher Alexis Mercado doubled to open up the inning, and was followed by senior shortstop Brett Balkan who singled on a bunt to put men at first and third with no outs. Sophomore third baseman Will Colantono singled on the first pitch of the at bat to score Mercado and tie the game at 8-8.

With one out, junior right fielder Chester Pak hit the first pitch he saw straight to center fielder Cody White, but it was deep enough for Balkan to run from third and score the go-ahead run.

CSUN wouldn’t score again, but they would hold Bakersfield scoreless in the bottom of the inning. Senior right-handed closer Shay Maltese entered a closing situation for the first time since a 6-5 victory at home over the Long Beach State Dirtbags on March 30, and came out strong.

Maltese had back-to-back strikeouts before allowing freshman third baseman Mahlik Jones to single on a 0-0 pitch. Maltese wasn’t fazed, as he struck out freshman utility player Nick White to strike out the side and earn the victory for CSUN.

The game began in the Roadrunners’ favor, as CSUN was hit hard early. Left-handed pitcher John Salas had his third rough outing in his last four starts, as he allowed four runs on five hits before he could get a second out in the inning

After a strikeout, Salas gave up two more singles and was relieved by right-handed sophomore pitcher Calvin Copping.

After Copping ended the inning with no more runs allowed, CSUN scored a run in the top of the second inning when senior shortstop Brett Balkan singled in junior Nick Blaser to make the score 4-1. One full inning later, CSUN exploded in the top of the fourth inning.

After Blaser, who leads the team with 49 hits on the season, singled and junior Nico Garbella reached base on a fielder’s choice, junior designated hitter Alexis Mercado found a hole in the defense through the right side, scoring Blaser. After Balkan reached on a fielding error by Roadrunner junior right-handed pitcher Nick Rogowski, sophomore third baseman Will Colantono walked with the bases loaded to bring the CSUN deficit to one at 4-3.

Bakersfield chipped away at CSUN’s lead with two runs in the bottom of the fourth inning and sixth inning to take a temporary 8-7 lead. The Roadrunners tagged Matador relievers Copping, sophomore right-handed reliever Anthony Cortez and junior right-handed reliever Louis Cohen before the taking the lead for good in the eighth inning.

The Matadors won just their fifth road game of the season, as they had previously gone 4-17 away from home this season. CSUN will return home Friday to host the UC Davis Aggies (17-23, 3-12 Big West) in the first of a three game series, with first pitch at 3 p.m. The Aggies trail the Matadors in the Big West standings with a winning percentage of just .200 this season.