Unknown lethal injections are a cruel and unusual punishment 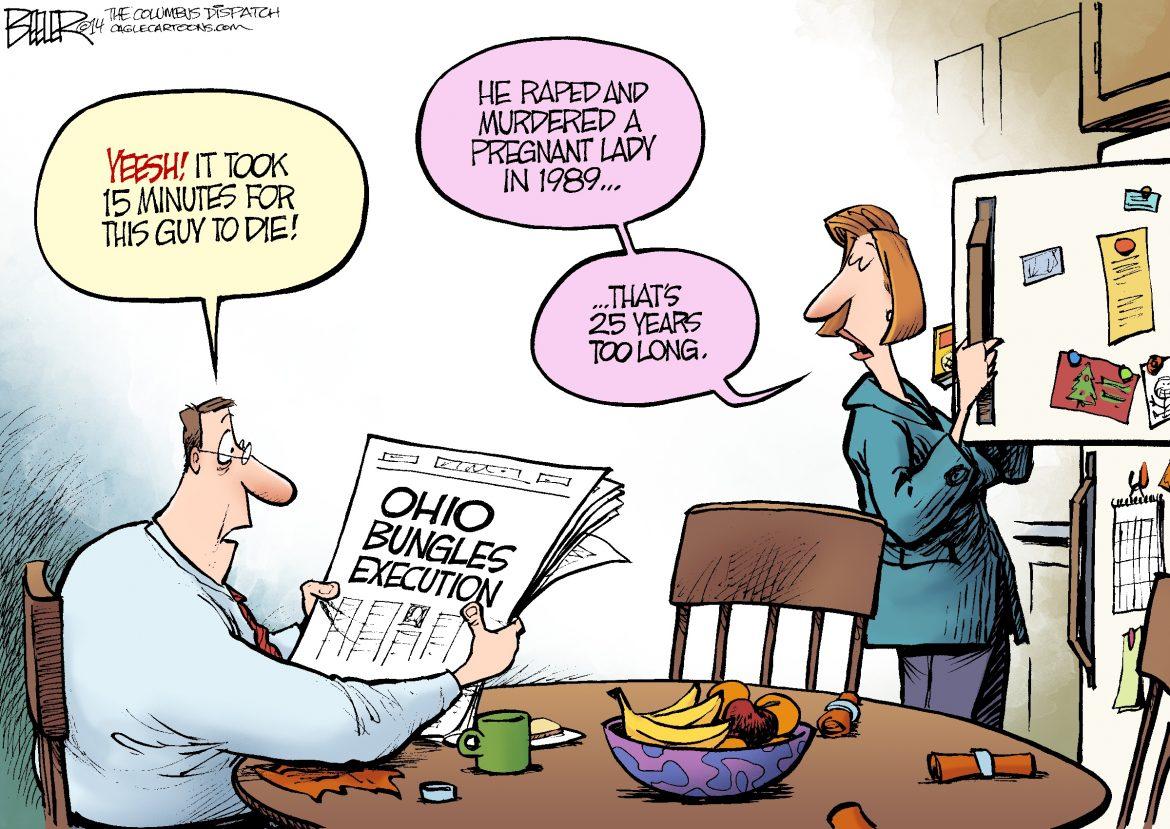 *Update (4/30): On Tuesday night, Oklahoma death row inmate, Clayton Lockett, died due to a heart attack more than 40 minutes after receiving a  botched lethal injection. Lockett is another victim of being an experiment for testing lethal injections. Lockett’s injection was mixed with three types of chemicals.

“I feel my whole body burning,” Michael Lee Wilson, an Oklahoma convict said after receiving a lethal injection on Jan. 9, 2014. The compound used in the execution of Wilson is a mix of drugs that includes pentobarbital, a substitute to the anesthetic sodium thiopental formally used for lethal injection.

The administering of untested concoctions for lethal injection that result in the surfacing of horrific execution accounts as in Wilson’s case, raise the question whether prisons are violating the Eighth Amendment of cruel and unusual punishment.

It is no surprise that death row inmates are demanding to know how they will die and civil liberties advocates such as the American Civil Liberties Union are questioning the use of experimental drug compounds for execution.

It is questionable why the Departments of Corrections, such as those in Georgia are allowed to keep information about which drugs they were using away from the public. If everything is kosher, why hide the sources of the mix used to kill criminals?

After the American pharmaceutical company Hospira halted the production of sodium thiopental in 2011 due to liability concerns and pressure from death penalty opponents, the drug has vanished on the market. The European manufacturers  of the drug also blocked the export to the United States in protest of execution practices, leaving US prisons to find alternative drugs such as pentobarbital.

Yet, as the alternate drugs become popular for execution, pharmaceutical companies increasingly become reluctant to sell the drugs to Departments of Corrections. States in dire need of a new lethal drug have recently turned to compounding pharmacies, which custom mix medication in bulk.

The issue with these pharmacies is that their products are not FDA inspected and thus lack accountability. This is due to the fact that large compound pharmacies are not required by law to register with the FDA, a crack in the system that has potential for serious consequences.

The recent account of an execution in Ohio of Dennis McGuire, seven days after Wilson’s, is gruesome example of how serious these consequences are. Columbus Dispatch Reporter Alan Johnson, who was present at the execution representing the Ohio State House reporters, said this execution differed dramatically from the other 18 that he has witnessed in the past, where inmates would normally “drift off” and go to sleep.

“After three to four minutes Dennis McGuire began gasping for breath,” Johnson said. “His stomach and chest were compressing deeply. He was making a snorting sound and almost a choking sound at times.”

The lethal injection for McGuire was a mix of two drugs that had never been used in the United State. McGuire’s 26 minute death process  speaks for the need of a reform to the way we punish criminals.

It is impossible to test  how effective these drugs are in executing an individual without putting them through pain and suffering while complying with the Eighth Amendment.

Ethically and morally official experiments cannot be conducted on people to test how fast and painless they die. But each time a prison tries a new cocktail on a prisoner they are in essence conducting exactly such an experiment.

In Georgia lawmakers passed a measure that would allow the state not to reveal their source of supply. However attorneys of death row inmates, such as Warren Lee Hill, are fighting this measure, demanding transparency of what is in the execution cocktail and where it is from.

When Hill’s attorney, Brian Krammer, challenged the law raising the concern that the drug pentobarbital sourced from a compound pharmacy has potential of being expired or tainted due to non-regulation by the FDA, Assistant Attorney General Sabrina Graham said in a hearing there was no evidence that the drug is substandard.

In revealing the source of the drug state departments of corrections would risk that other compound pharmacies would never sell to them again, according to Graham. The secrecy law remains, yet Hill’s execution has been put on hold until the judge decides how much information can be withheld.

Georgia is not the only state that has secrecy laws that withhold information pertaining to the source of execution drugs. The inherent problem with these laws is they hinder the investigation process that would prove or disprove whether the use of such drugs ultimately challenges the Eighth Amendment against cruel and unusual punishment.

If there is nothing to hide, states should be open to share information. We should all be suspicious of these secrets, especially with the recent execution stories.

In essence, the controversy around the drugs used in the lethal injection are just a small factor of the greater problem of capital punishment in America. The US has a certain arrogance about knowing the right thing to do when it comes to judging other countries and their practices. Yet it still administers an old fashioned and barbaric form of punishment by killing criminals.

America is on a short list of countries in the world that still permit the death penalty, including China, Iran, Iraq, North Korea and Cuba. Aren’t these the countries that the US likes to criticize? I thought we were better than the eye for an eye philosophy?