Our seafood could possibly be contaminated with radiation 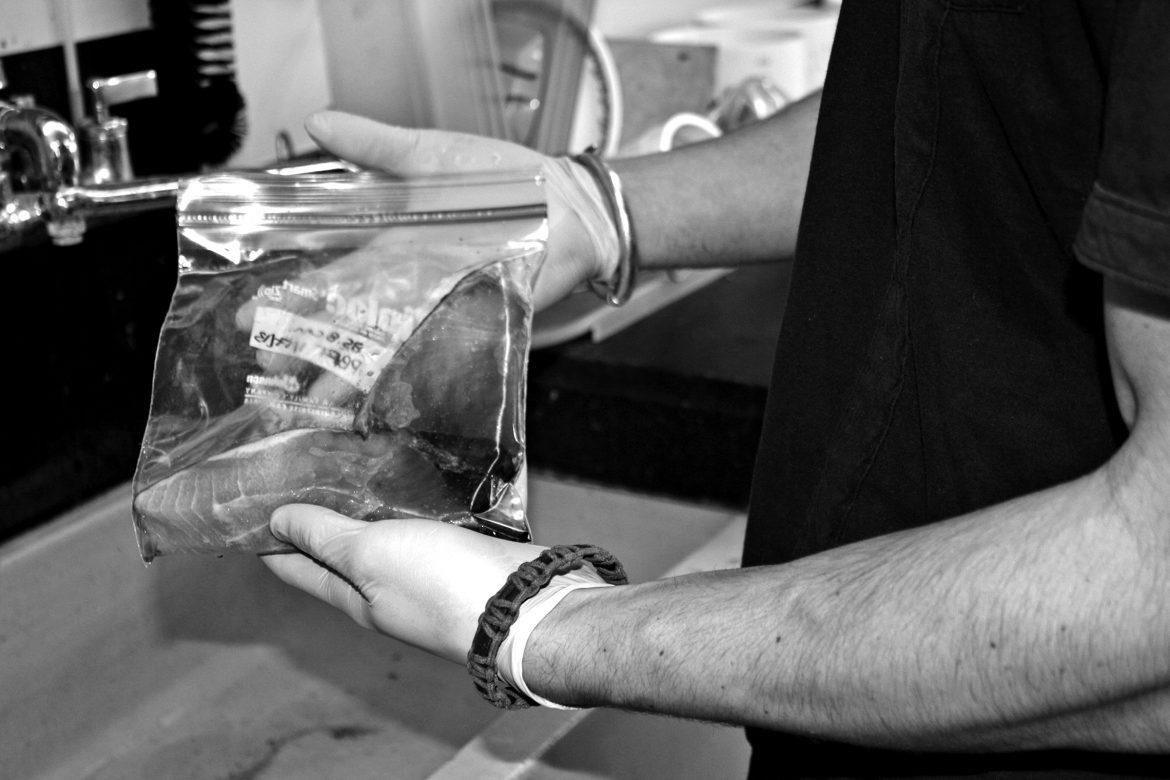 A Stanford graduate student tests a steak from a blue fin tuna caught in the Pacific Ocean for radiation./Courtesy of MCT

The federal government needs to comprehensively test seafood coming from the Pacific Ocean for radionuclide contamination because of the ongoing Fukushima nuclear disaster in Japan and make this data available for the public.

The triple nuclear meltdowns at the Fukushima Daiichi plant run by Tokyo Electric Power Company (Tepco) have continued to cause contamination of the Pacific Ocean at a rate of 300 plus tons per day. A plume of radioactively contaminated water is relentlessly heading towards the west coast of North America on the North Pacific Current.

Computer models estimating the initial massive radioactive fallout pollution did not consider the fact that tons of highly radioactive water has been leaking into the ocean from the Fukushima wreckage since the beginning of the accident back in March 2011.

Although dilution has played an important role in decreasing the risk to the Eastern Pacific regions, the potential for concentrated pockets of radioactive hotspots remain a concern.

In any case, man-made radioactive pollution at any level can cause cancer or other health damage in very small doses.

Most worrisome is the bio-concentration of radiological contaminants as they move up the food chain, sometimes resulting in apex predators such as killer whales accumulating an amount of radiation that is thousands of times more than the surrounding waters.

The US National Academy of Sciences, as well as other scientific institutions worldwide, has determined that there is no safe level of exposure to ionizing radiation for humans, which is referred to as the linear no-threshold model.

Joseph Mangano, executive director of the Radiation and Public Health Project, published a report last spring indicating a possible correlation between the Fukushima disaster and a 28 percent increase in babies born on the West Coast with hypothyroidism (underactive thyroid) compared with the previous year.

While this does not indicate a causal connection, radioactive iodine, which is implicated in this type of pathology, was found to be at high levels in rainwater measured by UC Berkeley soon after the Fukushima nuclear plant explosions occurred.

Shills for the nuclear industry have downplayed the potential hazards of human exposure to ionizing radiation by comparing bananas, which have low levels of radioactive potassium (K-40), to man-made radioactive cesium-137 discharged from the destroyed reactors.

This is a false comparison as cesium-137 is 10 to 20 million times more radioactive per unit volume than the K-40 found in bananas. Additionally, due to homeostasis, the body excretes the ingested potassium soon after digestion. Cesium-137 mimics potassium in our bodies and the food we eat, and can accumulate in our muscle tissue and potentially cause heart attacks, cancer, thyroid damage and other health problems.

Dr. Steven Starr, director of the Clinical Laboratory Science Program at the University of Missouri, Columbia, challenges the official EPA position that cesium accumulates evenly throughout the body as opposed to concentrating in the heart and thyroid tissues, thereby making it far more dangerous to humans.

Starr, who is also a senior scientist at Physicians for Social Responsibility, cites studies that show cesium to be far more dangerous to populations that are eating even relatively low levels of cesium on a daily basis because the bio accumulation exceeds the excretion rate in the human body.

When consumers eat fish contaminated with radioactive particles they become internal emitters by lodging themselves in and attacking bodily tissues, making them far more dangerous than an external radiation exposures of an equivalent amount. This is because of the fact that a small area of the body, on a molecular level, receives an extremely high dose of radiation from an internally placed radioactive particle.

Ultimately, these internal emitters can cause serious genetic damage and mutations that can lead to cancer.

The Japanese government and Tepco have repeatedly misled the public about the disaster, while not acknowledging for two months that the three reactors fully melted down within days. They have also restricted the public from reporting on the events at Fukushima,threatening Fukushima whistleblowers with jail time.

When the plume reaches the West Coast within the next few months, it will contain, among other radionuclides, strontium 90 and about 5 to 10 times of the amount of cesium-137 found in the Northern Pacific Ocean prior to the accident. These particles originated primarily from nuclear weapons testing done until the 1960s.

However, critics respond by pointing out correctly that adding any additional amount of radioactive contamination just exacerbates an already existing problem.

The US allows 12 times the amount of radioactive cesium in seafood as opposed to Japan, at a rate of 1,200 Becquerel’s per kilogram of flesh.

The national AMA adopted a recent California AMA resolution, that asks for the federal government to test, monitor and report the radioactivity levels of edible Pacific Ocean seafood sold in the US.

Denise Duffield of the Physicians of Social Responsibility said if “people eat contaminated fish there will be an increase in cancer, and pregnant women and the young are especially at risk as the rate of contamination increases.”

When the federal government says this, the rate at which cancer might be induced is minimal and when “there is no immediate health threat for the public,” is announced, some people may get cancer but maybe not for 50 years or so, Duffield said.

Ken Buesseler, senior scientist at the Woods Hole Oceanographic Institute on Cape Cod in Massachusetts, has done extensive testing off the coast of Japan for radionuclide contamination and has stated his concern about the Japan fisheries near Fukushima, which have for the most part been closed. Because of dilution, he says the seafood on the West Coast of the US remains relatively safe for now.

Because the Canadian and US governments are not testing and releasing data on radiation off the West Coast of North America, Buesseler has enlisted citizens to test the Eastern Pacific Ocean for radioactive cesium from Costa Rica up to Washington.

Migratory blue fin tuna caught off the coast of California have been found to contain radioactive cesium from the Fukushima disaster, but at levels below concern for the US government to take action.

It is hard to determine what and who to believe when it comes to the safety of the fish you’re eating when. According to the group Oceana, one third of the seafood they have tested at US restaurants is mislabeled according to FDA standards.

Fish caught within 86 miles from Fukushima have shown extremely high levels of cesium contamination according to Shoji Tsurumi, an expert from Japan’s Marine Science & Technology Institute in an interview with Xinhua.

Daniel Hirsch, professor at UC Santa Cruz, who exposed one of the nation’s worst nuclear disasters at the nearby Santa Susana Rocketdyne facility while teaching at UCLA, claims the EPA formulas for radiation exposures underestimate cancer impacts because it dis-inclines much scientific research.

It’s an invisible destroyer of cells, radiation, and due to latency, might take 50 years to manifest itself into cancer. Hirsch says this is an underestimate of potential cancer rates for fish consumers in the Pacific Basin, while others say…nonsense.