Promise zones don’t seem to be much of a promise 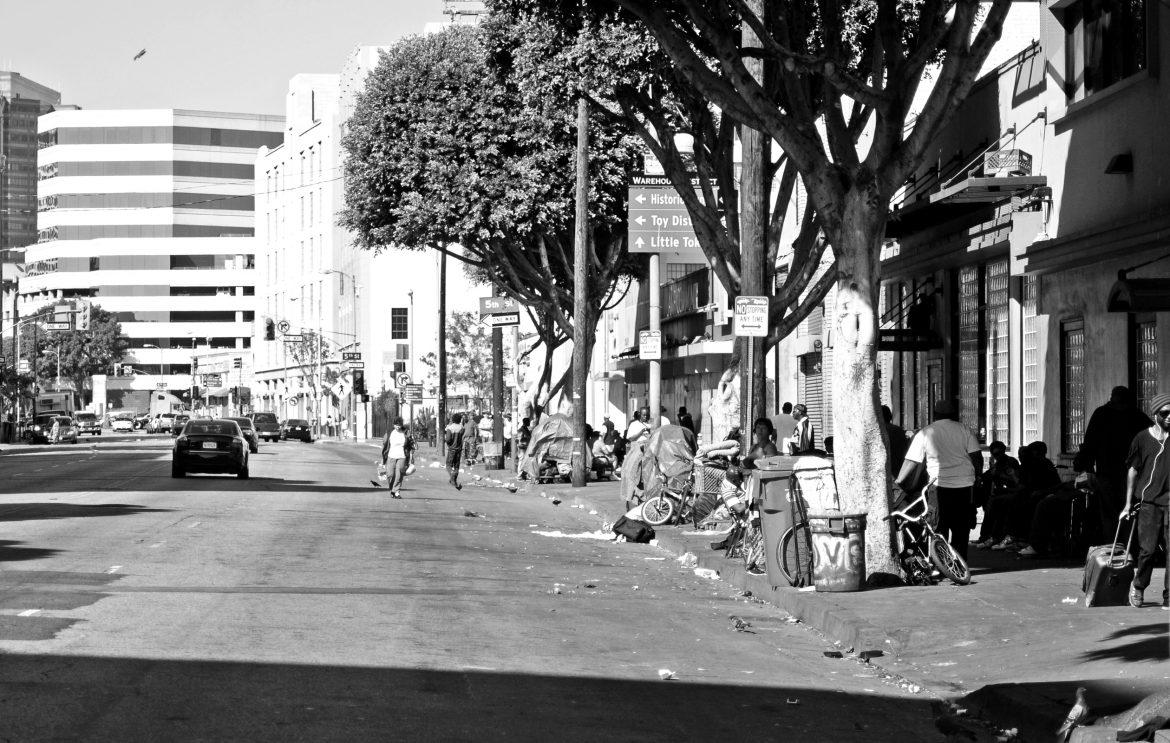 The stark contrast between the affluent businessmen and those living in poverty in Los Angeles can be seen literally across the street from each other. Photo credit: David J. Hawkins/Photo Editor

Remember back in February when President Barack Obama said in his State of the Union address that he would find a solution to the problem of poverty and homelessness in America?

And it comes to no surprise that Los Angeles is one of the first of five communities to take part in this program.

Los Angeles County itself stands with the highest poverty rate out of all the counties in California. The most recent statistics provided by the US Census found that between 2009-2011, LA County had a poverty rate of 16.9 percent.

However, the Public Policy Institute of California (PPIC) found that the poverty rate is actually much higher. Factoring in the high cost of living in LA, poverty actually stands at 23.5 percent. To add to that, California has the highest poverty rate (16.9 percent) out of all states in America (14.7 percent as the national average rate of poverty).

As with most Obama-endorsed programs, there’s always a question of whether or not this will pan out to match his rather glorious words. Just take a look at Obamacare and the mess it created.

The first thing to note about the Promise Zone initiative is that it does not directly fund local community organizations. The government isn’t exactly sending out a federal aid relief team either.

To quote the Bureau of Justice Assistance (BJA), “Promise Zones will not receive direct funding, but will benefit from technical assistance, federal staff support and more extensive preference points and access to other federal grant programs.”

In more simple terms, Promise Zones will receive aid in applying for already existent federal aid programs. There are no new programs or aid coming out to help out these communities. Rather, it is giving these communities more paperwork and bureaucratic loopholes to work through.

More worrisome is this: “Communities will compete in a transparent process, and be required to demonstrate the strength and effectiveness of their local commitment, to become Promise Zones. Each designated Promise Zone will be asked to identify a set of outcomes they will pursue to revitalize their communities, develop a strategy supporting those outcomes and realign resources accordingly.”

This wording is straight from a government page explaining what the Promise Zone program will do. It is key to note that “communities will compete.”

I don’t know about you, but communities competing for already scarce resources isn’t a solution. Essentially, the Promise Zone program has put impoverished neighborhoods into a political dogfight. Not only do communities have to jump through bureaucratic paperwork for aid, but they must compete against each other for the same aid.

It is a classic set up of the divide and conquer technique. The Promise Zone guidelines clearly state that each community must demonstrate its strength and commitment to becoming a Promise Zone. But what happens when a community can’t reach the goal it had set out for the year that it is a Promise Zone?

Unfortunately, the guidelines don’t specify the consequences of communities not meeting their set goals. I can only assume that they get dropped for lack of commitment.

My question is why set impoverished communities against each other? The common enemy is poverty and a lack of resources. A better solution is to bring these communities together and pull together a collective strategy to tackling one common goal at a time.

Instead, in order to be considered to be included in the program, each community has to draft up their own strategy. It becomes a competition of who can appease the government better. Each community will be fighting for their own survival over scraps of federal aid. Precious resources are wasted in continuously observing and writing reports about what progress is being made in order to stay eligible.

And I have to mention this line: “Businesses investing in Promise Zones or hiring residents of Promise Zones will also be eligible to receive tax incentives for these activities.” This is the part where the Obama administration is supposed to bring in businesses to our poor communities in order to provide more job opportunities. In this sense, big businesses and communities are working together to raise themselves up.

Or at least that would happen in a more happy world. While the tax cut needs the seal of approval from Congress, private corporations seem to have a nice little setup going for them.

If the tax cuts are approved, businesses will enjoy low taxes while having a pool of desperate workers at hand. And these workers will probably be paid minimum wage for their labor since businesses aren’t typically willing to share their savings with the common worker. So who exactly is benefitting now?

Centering this program back to LA, it is interesting that South-Central LA (now known as South LA), which has the highest poverty rate amongst LA neighborhoods, was excluded from the LA Promise Zone.

When Mayor Eric Garcetti was questioned as to why South-Central was not included in the Promise Zone,  Garcetti responded, “The White House said you had to win a previous grant. And South LA didn’t win one.”

Perhaps it is better for South-Central to be excluded from this competition. The Promise Zone program can be seen as a tactic for gentrification, and I don’t think South-Central residents need anymore problems to deal with.

It’s not like I’m hoping for the Promise Zones to fail. I’m actually hoping that this program will do some justice for impoverished neighborhoods. I’m just skeptical because the Promise Zone seems to be a program of exclusion, division, extortion and unneeded competition.