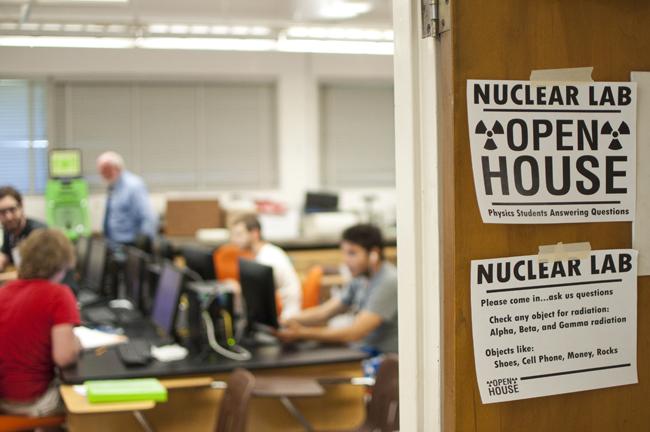 Imagine a group of students, sitting in a circle, discussing what they’ve discovered during lab time. Though it seems normal, they are actually discussing alpha, beta and gamma radiation.

The laboratory has been open for 25 years and physics students have done an array of experiments such as testing rocks, smoke detectors, old plates and glassware for different forms and levels of radiation. Based on their discovery, they are able to tell how dangerous these objects are and quantify them to create a safer surrounding.

Headed by professor Duane Doty, the radiation laboratory may just be one of the least populated laboratories on campus, due to students being unaware it exists.

But the laboratory can be one of the most exciting places to visit if students are curious to hear the Geiger counter, an instrument used for measuring radiation, click over a rock collection or old pieces of radioactive jewelry.

Here, students can also quell to their concern that their most prized possession, their mobile phone, is not as harmful as it is said to be.

“Everyone thinks phones are going to give you cancer, but everyone just accepts that when really there is no reason that is going to happen,” said Lopez, a graduating senior majoring in physics. “It is sending out information, but that information is in a form of radiation that is not bad for you. So the only way you could actually get cancer from this is to have the signal running 24/7 and embedded inside of your head.”

A two-hour long conversation will not kill all their brain cells.

Though the laboratory is strictly open to physics students, Doty and his students hope to alter any skepticism students have about radiation.

“I think we want what we study to be real world and we do not want it be abstract and there is nothing more real world than something like this (radiation lab),” Doty said.

He said there are people who are curious about their belongings that they want tested.

This gave the stimulus behind Doty’s idea for the laboratory’s open house on Tuesday, to invite students into the radiation laboratory to observe and bring in items for testing.  Doty’s students Etienne, Reschke, Lillibridge and Lopez are enthusiastic about educating students on everyday misconceptions.

“What we are trying to do is take what we have learned and be able to share our understanding and demystify some of the automatic response people have to nuclear and radiation,” said Etienne, a senior physics student.

The radiation laboratory is not a scary place to visit and is less likely to harm students if they follow the instructions and safety methods.

“It is always the things we don’t know that we are scared of, always,” Etienne said.

The group of students expressed how important it is to understand when radiation is dangerous, and when it is not. They used the sun as an example, as a common misconception that it is not good for us, but how we need it for our bodies to produce vitamin D.

Take bananas for example, they are high in potassium, nutritious for the body and are also radioactive, but they’re not harmful to the body. Same with potatoes and carrots. They naturally produce potassium- 40, which makes them sources of radiation our body absorbs, Doty said.

“Any radiation is bad but we must compare it to other things,” Doty said. “Animals have been living with this radioactive element in them for millions of years.  It does cause some trouble but that is absolutely miniscule compared to the good it does. Potassium is carefully monitored by your doctor and if you are low he puts you on potassium pills because your heart might stop beating. Swimmers cramp in the pool and eat bananas to keep from drowning.”

Reschke, senior physics major, spoke about an extremely radioactive element they worked with recently in laboratory that is found in smoke detectors. Students would learn to never crack open an old smoke detector during a visit to the laboratory.

Other items that have highly radioactive elements are the mantles from Coleman Lantern bags and old glow in the dark items.

Doty recalled seeing a young lady wearing a green stone around her neck and decided to scan it with the Geiger counter. The stone was from the Trinity test site, the first atomic explosion and was a piece of leftover glass found on the floor that people used to make jewelry.

“In one way that’s the beauty of radiation,” Doty said. “You cannot hide it.”

This year Lopez, Reschke and Lillibridge are the only undergraduate students to graduate from the physics department. Doty hopes that more students will stop by the radiation laboratory and learn more about the subject.