Filmmakers need to focus more on story, less on technology 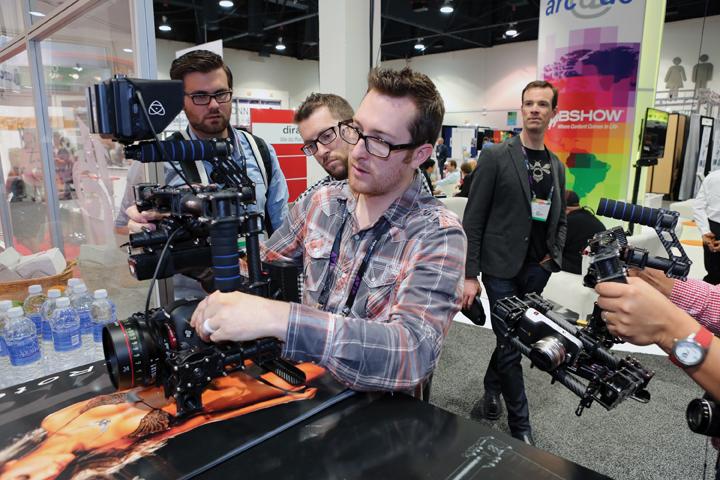 With the tech industry growing faster than the film business can keep up, speculation has grown over what entertainment will look like in the next year, much less by the end of the decade. The National Association of Broadcasters (NAB) Show 2014 is the world’s largest event covering filmed entertainment and content development, management and delivery in Las Vegas, Nevada. The NAB Show 2014 in April talked a little about how today’s technology develops a better movie.

New technology allows a film to be made better or to look prettier, but how does it translate into something an audience can feel?  Technological advancement can be daunting to an independent filmmaker. However, it’s not the size of the camera, it’s how the filmmaker uses it.

Storytelling is the reason for innovations in filmmaking, not visual effects nor camera technology.  If anything is to remain constant through the years of filmmaking, it’s the audience’s need for a story.

Think of an artist as a “transcriber of dreams” with technology being the way they translate vision to reality. Technology comes in all shapes and sizes, sometimes as simple as pencil and paper.  It is the job of the artist to push against the glass ceiling of technological advancement so as to ensure their dream is translated accurately.  Today a film director can just about place a camera anywhere they want because cameras are durable and inexpensive.  The demand for dream manifestation comes from pushing technological forces in new directions and demanding nothing but visual accuracy.

There will always be a demand for content creation. It is the job of technology to help bring story to the silver screen, not the other way around.

Films like “Avatar” and “Jurassic Park” could not have been made without computers, but they would have been impossible to make without scripts. Technology is only a supplement to storytelling. It provides a new way of inventing characters and connecting with audiences. There is no difference between the gladiators of “The Coliseum” and the next “World of Warcraft” — the drama is the same, only the medium in which the artist chooses to convey the story changes.

Audiences are thirsty for story, in any form. A beautiful shot is only a beautiful shot until it is put into context; then it can become the best part of a movie.

Just because a filmmaker can do something does not necessarily mean they should. It takes a vast amount of training to know which tools are right for which project. Film camera or digital camera?  2D or 3D?  Color or black and white?

Some decisions may come down to cost, but a filmmaker has the same amount of responsibility to their story as they do to picking the right technology to supplement their story. For example, the 2011 film “The Artist” may not have been the best candidate for 3D, but it was a great black and white film. New technology is not always better. Studios should think from the artist’s perspective about the essence of the story, then find the best method for capturing it.

The film industry is a business, first and foremost.  Movies are generated to turn a profit and many people have their hands in the metaphorical cookie jar. When all is said and ready, the original artist may not have full autonomy over his or her own work.

The only thing an artist can do to maintain creative control is be strong and have an opinion (in brief, see James Cameron “Titanic,” John Singleton “Boyz n the Hood” and Stanley Kubrick “2001: A Space Odyssey.”)

The vision of the project is compromised when the storyteller gives up. This is not to say that a filmmaker should rule with an iron fist. But an artist with an opinion, and a creative vision, is someone investors can stand behind.

Having a clear vision of the idea makes finding the path all the more simple. Technology is a tool for maintaining dreams, whether the technology is archaic or advanced. Filmmaking cannot exist without technology. To embrace technology is to embrace a future of storytelling.

Sam Felman is a senior screenwriting major who has worked in production on a number of movies and TV shows since 2009.