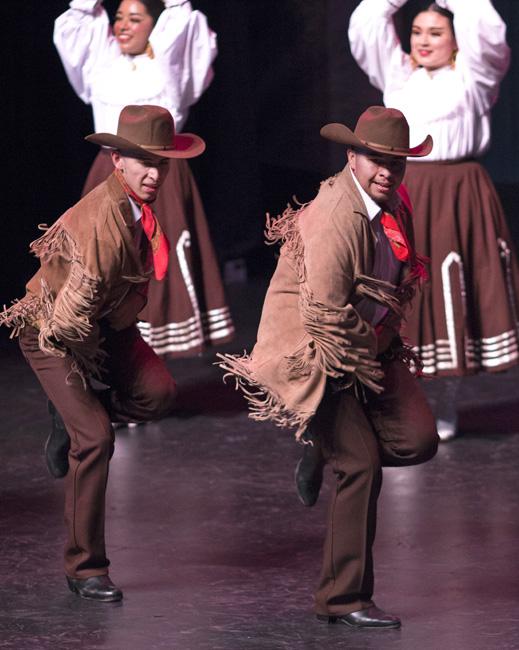 Cinco de Mayo started early with performances of traditional Mexican dances at the annual Folklor de Mexico showcase. Ballet Folklorico Aztlan de CSUN and Los Danzantes de Aztlan de Fresno State University performed dances from various Mexican states to a packed house on Saturday. Chicana/o studies professor Maria Isabel Herrera served as one of the MCs. The first performance of the night was “Velacion a la Virgen de Guadalupe,” which means Vigil for the Virgin of Guadalupe. Part religious procession, this performance began with a somber blessing to the virgin, while dancing with a cross in one hand. The dancers, clad in white except for colorful flowers decorating their tall hats moved with grace to the rhythm of the drums. One dancer had a headpiece resembling a deer. He moved like a deer around the stage picking up each foot to the sound of his two “sonajas” or large rattles. Herrera explained the dance to the crowd.

“One of the emphases of that is, it’s all dedicated to our lady of Guadalupe, everything,” she said.

Another dance performed by the troupe from CSUN was from the Baja California region. Their costumes were similar to American western attire. The men and women wore cowboy hats and boots with denim pants for the men and skirts for the girls. For the uninitiated, it might look like a cowboys are doing Irish stepdancing, but while the foot movements are not as fast they are bit more intricate. “It calls attention to the footwork, it is exceptional,” Herrera said.

The men and women all performed in unison as they stomped on the floor and kicked their feet in front and behind them. This dance was more of a battle between the sexes as rows of men and women came out and danced against each other.

Their shoes hit the ground perfectly to the beat of the music. “One of the important elements of the dance is the zapateado (footwork),” Herrera said.

While the costumes for the dances from Baja California were simple, the costumes from the next two states were anything but. The men and women both wore bright colors as they danced to the music of a live Mariachi band. The women twirled their skirts with a hypnotic rhythm that left the audience cheering. The men in turn, used machetes to keep the tempo of the music. “The dance is meant to be heard,” Herrera said. “It is another acoustical element to the song.”

The audience cheered and yelled when they got in a circle and played catch with the machetes. During another part of the performance, they also used the machetes to playfully scrape at the feet of the women dancing next to them. Herrera explained that the reason for incorporating machetes into the dance was because they are used to clear the land for farming. “Somewhere along the line they incorporated into the dance,” she said. The women by comparison danced with glasses of water on their heads. With each step they made sure not to spill a single drop. It was quite a sight to behold.

The last state visited on this journey of dance was Jalisco, which is where the traditional dance known to many outside Mexico as the Mexican Hat Dance comes from. The women wore bright sequined skirts while the men were dressed as “charros” or Mexican hosemen, complete with a large sombrero. The women displayed great enthusiasm and skill as the men danced around them. Applause and cries of “Viva Mexico” rose up from the crowd as they finished their performance.  BFA de CSUN was not the only group in attendance, Los Danzantes Aztlan de Fresno State University were also in attendance and performed two dances from the states of Hidalgo and Nuevo Leon. “Every rhythm is very different and that’s what makes this dance concert so unique,” Herrera said. Mariachi Mexico also performed a few solo songs, including the classic Volver, Volver (Turn, Turn) which had the crowd singing along during many of the verses.

Music and dance were not the only items on the agenda that night. BFA de CSUN also presented a scholarship to psychology major Stephanie Esquivel. She said thanked the scholarship committee for the award. “I feel like I’m getting validation for this opportunity and for everything I’ve worked so hard to achieve,” Esquivel said. BFA de CSUN also took time to honor two members of the group who will be graduating this semester, Juan Carlos Garcia and Diana Cabral. They were presented with red sashes embroidered with BFA de CSUN. Cabral, who will getting her Master’s degree did not perform and instead helped backstage. “This is my first time in 11 years, I don’t dance in the show,” Cabral said. She said it was honor to be recognized by the group. “I will wear this sash on my graduation day with pride,” Cabral said.

Those that participated in the show were pleased with the outcome. Carlos Parraguirre, is a former CSUN student who continued to perform with the group. “To see it all come together is a good feeling,” he said. Maria Hernandez, administrative assistant for BFA de CSUN, said it brought her closer to her roots. “It brings a whole new level of culture to my life,” Hernandez said. She said her mother, who is also a dancer critiques her performances. “Audience memebers are the best crititcs,’ she said. At the end of the show, Erika Lopez, chair of BFA de CSUN presented the other groups and instructors with certificates for their hard work. She also thanked those in attendance. “Thank you everyone for being here… and I know you’re going to come back next year to appreciate the 12th annual (performance), Lopez said.