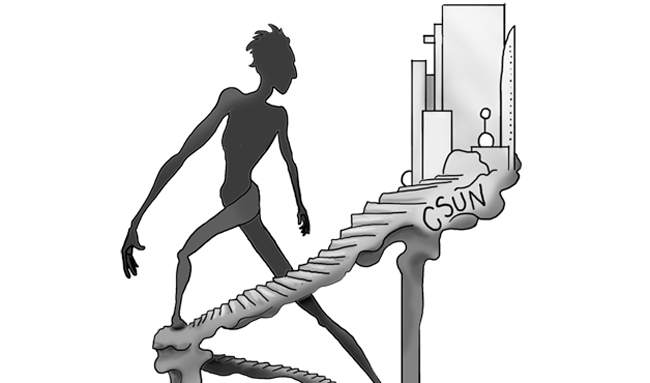 For many students, graduating and obtaining a degree requires them to transfer from other two-year colleges.

“I wanted to stay close to home and save some money before transferring to CSUN to finish my psychology degree,” she said. “It was kind of hard to decide what to do next when you just graduated from high school.”

Reyes is not alone. Thousands of students transfer colleges and universities each year, according to a report from the Chronicle for Higher Education. They estimate that at least one-third of all students transfer schools at least once before they earn their degree in a report done by the National Student Clearinghouse Research Center.

The Chronicle also stated the most common time to transfer is in the student’s second year of attendance.

She also mentioned that CSUN was closed to new transfer students this spring and last.

“The number of transfer students enrolling in any given term has tended to fluctuate,” said Huber. “I do not expect this pattern to change in the immediate future.”

There are also special grants offered only to transfer students by the California Student Aid Commission, such as they Cal Grant Transfer Entitlement Award.

The grant started in 2001 and was authorized by the California Legislature and the governor to ensure that all eligible students with financial need could attend a university and earn an education, said Patti Colston, communications manager of the California Student Aid Commission (CSAC).

According to the CSAC’s website, the only requirements are that the student must have graduated after June 30, 2000, attended a California community college, have transferred over to a four-year institution. The student must also have at least a 2.4 community college GPA, meet the Cal Grant financial and eligibility requirements and be under the age of 28, according to the website.

The California transfer entitlement grant offers up to $7,000 in grant money to cover school fees for transfer students that attend one of the California’s in-state four-year institutions, according to an article on the Huffington Post.

“Students that are transferring are encouraged to apply, because this is their final opportunity for a Cal Grant Entitlement award,” said Kurt Zimmer, associate governmental program analyst for the CSAC. “All grants to which they would apply hereafter are competitive and limited in number, meaning not all eligible applicants are guaranteed an award.”

He also said that the California legislature and the governor have reduced the number of competitive awards to 22,500 each school year.

Zimmer said in the 2013-2014 academic year, 1,297 CSUN students were offered a California Community College Transfer Entitlement Award. Out of that number, only 894 met the conditions of the award based on their response to the form required for the grant.

Zimmer also said that the CSAC plans to run this year’s 2014-2015 transfer entitlement award cycle in about mid-May.

“Students will be required to complete the Transfer Entitlement Cal Grant Certification form prior to using their award,” said Zimmer.

Students may complete this required form online at webgrants4students.org

Noel Garcia, junior liberal arts major said being a transfer student has its ups and downs.

“I didn’t like having to switch schools and commute an hour away, but I really enjoy CSUN so it was worth it.”