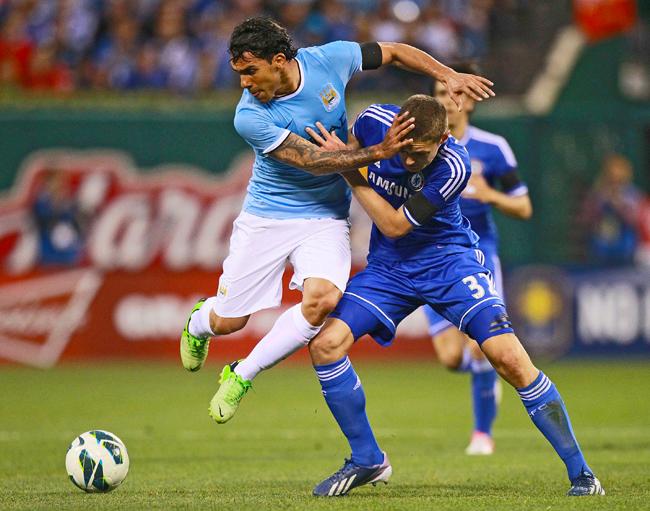 Whoever ends up holding the trophy in the Premier League this season ought to send flowers and a card to Old Trafford Stadium in honor of the team that helped make it all possible, Manchester United. To say that the Red Devils have had a bad season is an understatement.

Winning the league one year and placing fourth the next should count as a bad season for any top team. Winning the league and then placing outside the top four is a terrible season. Going down to seventh place, sacking “the chosen one” before the season is even over, and then not having a single player on the 2013-14 PFA Premier League Team of the Year for the first time in 24 years is an abysmal season.

There is a positive to be drawn by this, for other teams that is. If you are a United supporter, you can skip this paragraph entirely. Actually, do not even read the rest of this column if you are looking for comforting words. That positive is while Manchester United’s form has left much to be desired, it opened up the possibility for a thrilling top fight among the field. Claims have been made that it is troubling for everyone that the poster team of the Premier League is falling flat on their face, that it is affecting the brand and the very core of the British league.

Yet, is the real trouble here not the fact that the brand has become more important than the quality of the league?

As of right now, the Premier League is surely not the best, having been largely overtaken by the Spanish La Liga and the German Bundesliga. United, in particular, has fallen behind Europe’s best teams, including Bayern Munich, Real Madrid and FC Barcelona. However, with a shift in power, the league may rediscover what the core has always been: thrilling soccer and passionate fans.

If we take a look back at when Manchester United has been at their strongest, we see a pattern forming. In 2012-13, they won the Premier League with 89 points, 11 points ahead of Manchester City. In 2011-12, United did not win, but in fact lost out to City due to goal difference. The closest team to the two Manchester sides was Arsenal at 70 points, 19 points behind Manchester United. In 2010-11, United had another comfortable title-run finishing with 80 points, 9 points ahead of Chelsea. Need we go further back and talk about the 90s where United virtually won every year?

When one big club falls, another club rises from the shadows. It is symbolic that that club is Liverpool. The Merseyside team were close to toppling their rivals in the 2008-09 season where head coach Rafael Benítez and his men fell short with just four points. Despite being locked in a battle for first with Manchester City, the Reds have an opportunity to give long-time captain Steven Gerrard the championship he rightly deserves. The end of Manchester United reign is growing to an official close.

Legendary former manager Sir Alex Ferguson considered it his greatest achievement to have pushed Liverpool out of their winning ways and by leaving a title-winning team in the hands of David Moyes, he thought that the legacy of dominance would continue this season. With the help of an unmotivated line-up of stars, Moyes managed to stomp on that legacy.  This season, teams that once had shaky knees before entering Old Trafford were eager to get on the team bus and claim three points. Thus, United’s downfall has not only opened up for the return of a successful Liverpool side and an unexpected end of the season, but it has also saved those struggling for survival in the Premier League’s deep end.

Maybe it is all an alignment of the stars that the absence of Ferguson and the bad results of United have seen inspiring efforts by managers such as Brendan Rodgers of Liverpool, Manuel Pellegrini of Manchester City, Roberto Martinez of Everton, and Mauricio Pochettino of Southampton as an honorable mention. Or, if there is room for such a bold claim, one might say that we are seeing a revival of the Premier League. Now, Manchester United is forced to re-think their entire foundation and perhaps next season, fingers crossed, the league will be that much richer.