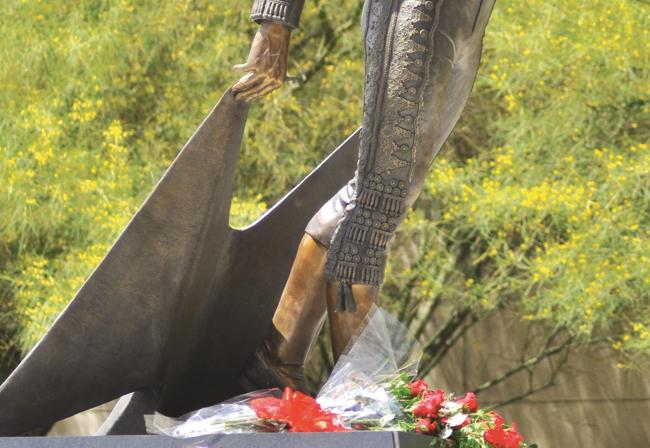 In keeping with the "Tradition of the Rose," in which students place roses around the matador statue to symbolize accomplishments, struggles or other major changes in their lives, fresh roses can be found lying at his feet. Many students turn to this tradition for good luck during important sporting event or as the case is now, in preparation for finals week. Photo credit: Ana Rodriguez / Assistant Photo Editor

An additional three tickets for commencement ceremonies will be given to most graduating seniors, according to university adviser Tom Piernik during Monday’s Associated Students (AS) meeting.

AS also commended the Matador men’s and women’s basketball teams for their performance during the 2013-14 season.

Continuing the CSUN tradition of the rose, Talar Alexanian, AS vice president, gave the members of each team a rose and requested that they place their roses at the foot of the Matador statue as a symbol of honoring the team’s success.

During the open forum portion of the meeting, two clubs spoke to request funding. Ariel Stone, the president of the student association club, said the General Education Paths” program will now have a club to unite all the students who are a part of this program. Students enrolled in the GE Paths program explore a theme or question in the context of their general education requirements.

The different paths offered in the program are based on personal and intellectual interests of the students, according to their website.

The courses available include health and wellness arts, media and culture and social justice.

For the senate approval of the clarinet club, President Jec Cabales presented the club’s mission to the AS.

“The Clarinet Club’s purpose is to provide opportunities of master classes with the idea of bringing discipline and fellowship with professional clarinetists as well as opportunities of scholarship to help even more advance student’s clarinet education,” said Cabales, who is a Clarinet Performance major.

The meeting was concluded with graduating senators expressing their gratitude and feelings towards completing their service in the student government body at CSUN.

Piernik also reflected on his time at CSUN as he completes 28 years of services at the end of this term.