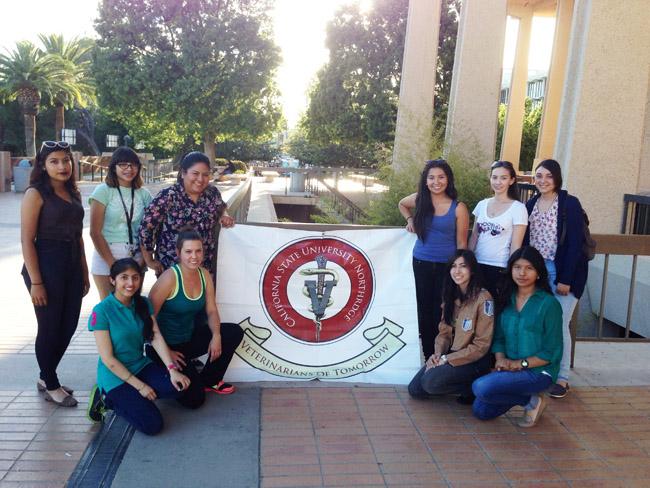 Kyrra Toman, 22, a biology major and vice president of Veterinarians of Tomorrow, realized she wanted to be a veterinarian when she was six-years-old.

She remembers her dog’s paw getting cut after it jumped over a fence to get into a garden.

“I just sat there putting band-aid after band-aid and I remember putting three socks on her,” Toman said. “I had this vet case that had a stethoscope and all these little tools and I followed my dog all day making sure she was okay.”

For Toman, this was her fondest memory as a young child and since then, her passion for animals has thrived, leading her to join the Veterinarians of Tomorrow at CSUN.

The Veterinarians of Tomorrow was founded in 2010 by Izabell Karaghossian, who has now graduated and left the club in the hands of its future members. The club is targeted to provide information, assistance, guidance and networking opportunities for pre-veterinary students on campus.

The club meets at least twice a month and hosts a variety of activities for its 20 active members, a number which varies by semester. They also offer field trips, guest speakers, information about vet schools, test prep speakers, advisement and overall a bond between group members.

If members can’t meet in person, the club communicates through email so everyone stays connected even if they didn’t attend the meeting that day, Toman said.

“It is really like a support group for veterinarians,” said Denyse Hernandez, 21, biology major and president of the club.  “A way for pre-vets to come together is to join forces and have a common field and exchange information about what we know and what we can do.”

Hernandez said the club focuses on discussing what it takes to be a veterinarian, volunteer opportunities, what classes to take and internship or job opportunities.

“I really liked the meetings because they are very informative and I learned a lot I didn’t know,” said Cynthia Nuñez, 18, secretary and biology major. “The handouts that they would give out I found extremely helpful and I was able to get more information from Dr. Richardson, our academic adviser. She helped plan out classes I could hopefully get into in the future.”

Last December, the club had a fundraiser called Animals Wish List where staff, students and members from the community came to the F10 parking lot on campus and donated items for the pets.

Among the items donated were beds, blankets, newspapers, grooming supplies, carriers, treats, toys, leashes, collars and bowls, Hernandez said. Together they raised about $1,000 dollars in supplies for the animals, which were donated to theWest Valley Animal Shelter in Chatsworth.

The club also participated in a clinic day, which provided free vaccines and medical care for pets of the homeless.

“I really like the fundraiser, getting all that put together and then the outcome of it is really rewarding,” Toman said. “Even though it rained, being involved with everyone who participated in it was fun because we kind of got to know each other a little better and it showed me who was very willing to participate and was active in the club.”

However, the club has struggled a bit this semester with the transition of new officers from this semester and last, Toman said. The club also want to improve on expanding, because they are one of the smaller clubs at CSUN.

“We definitely want to change some of the infrastructure from what the founder made because there is a lot of stuff we need to work on,” Hernandez said. “There just a lot of little details we need to change and definitely expand the club.”

Since its start three years ago, the club has won three awards. Their first major award was the “Outstanding New Club Award,” which was awarded to them in May 2010 at the Annual Clubs and Organizations Award Ceremony.

As for the future, the Veterinarians of Tomorrow want to continue to grow and improve the club and participate in many more events. Students interested in joining the club can visit their Facebook page as well as their Instagram page.