A smoky situation on e-cigarette regulation 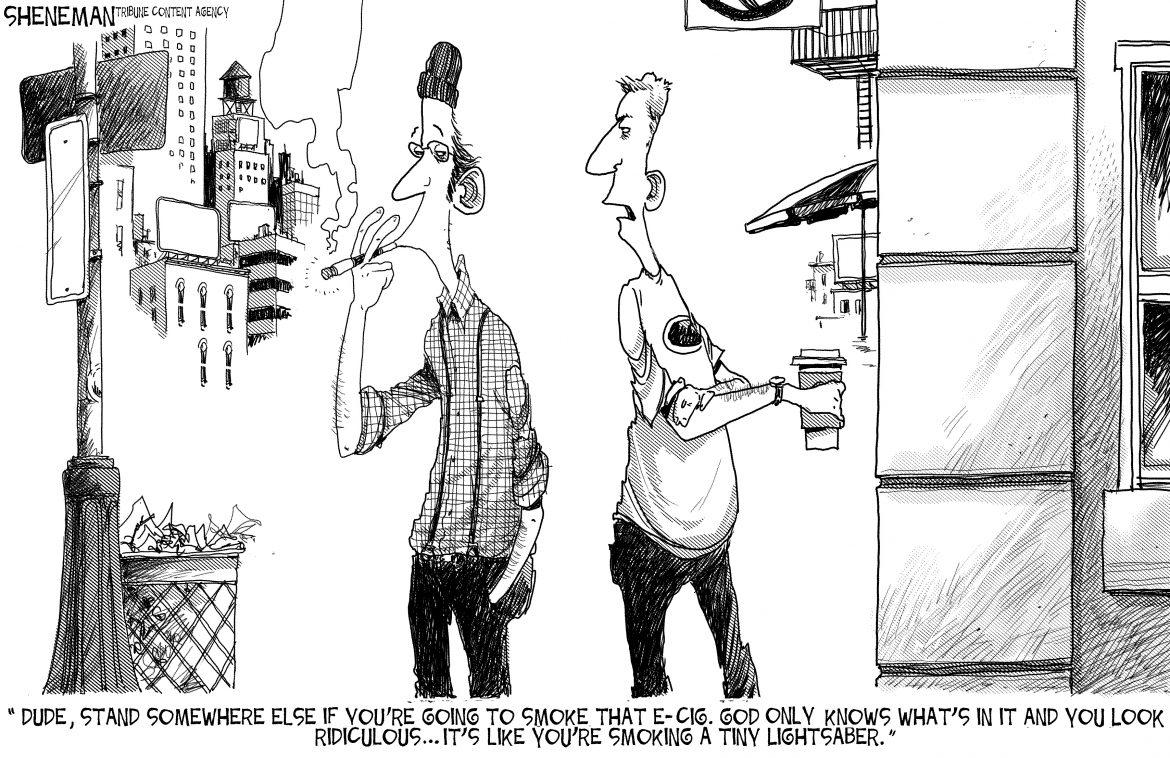 Electronic cigarettes (e-cigarettes) have become the latest trend among the current generation of smokers. There is also an ethical dilemma of e-cigarettes being promoted as a“safer solution” to cigarettes. However, e-cigarettes are still a tobacco product and must be monitored accordingly.

Currently, there is no federal oversight on the e-cigarette industry, which has expanded into a multi-billion dollar industry in recent years.

However, on April 25, the Food and Drug Administration (FDA) proposed new regulations on previously unchecked tobacco production and sales, which includes e-cigarettes, cigars and pipe tobacco.

If the regulations pass, the FDA would be granted more authoritative power concerning e-cigarettes and products.

Proposed statutes would establish where e-cigarettes could be smoked and would make the sale of e-cigarettes to minors illegal. People who wish to purchase e-cigarette tobacco and paraphernalia would be required to show photo identification a proof of their age.

Under the new regulations, companies would also be unable to make false health claims without a comprehensive review by the FDA.

This new proposal does not give the FDA authority over the marketing and advertising of e-cigarettes, unlike the regulation of regular cigarettes.

I am going to sound like an overbearing mother, but this FDA proposal is long overdue. E-cigarette marketing and advertising needs to be regulated for the benefit of current and future generations.

Since there are no federal rules governing the marketing of e-cigarettes, a loophole allows e-cigarettes to be sold to minors legally. Not good.

The unregulated, free-market of e-cigarettes has already created some negative results. According to the Center for Disease Control and Prevention (CDC), e-cigarette use doubled among US middle school and high school students between 2011-2012. The CDC estimates that about 1.78 million youths had tried e-cigarettes by 2013.

I am inclined to say that this unfortunate rise in youth smokers is due to the fact that e-cigarettes have been evading regulatory reprecussions. Smoking is still advertised as “cool” and “sexy.”  Minors who want to fit in with their friends may be pursuaded to smoke, therefore ushering in a whole culture of smoking to younger generations. We don’t need more minors beginning to smoke at a young age, and influencing their peers.

Besides, wouldn’t it be strange to see high school students smoking casually on campus? The smoke coming from the e-cigarettes would be a distraction to both students and teachers.

But for some reason, regulating this product has proven cumbersome.

E-cigarettes are also easily acquired through the Internet with just a credit card. There is no definite way for online markets to determine if the buyer is a minor.

E-cigarette supporters are saying that e-cigarettes are a safer alternative to traditional, carcinogen-laden cigarettes. They’ve turned this into their main marketing point – that you can look cool smoking without the health risks of regular cigarettes.

Although there is no definitive evidence pinning major health risks to smoking e-cigarettes, there’s also no conrete evidence saying that it’s safe.

In order to smoke an e-cigarette, you must insert juice in a reservoir, which is then inhaled as smoke vapor and exhaled. Currently, these juices are unregulated by the FDA, meaning nobody but the sellers know what actually goes into the liquid.

It’s kind of like purchasing illegal drugs. You don’t know if the juices are laced since people are literally mixing them in their own homes. However, if the mandated sale of e-cigarettes is to continue, the FDA must set regulations on what goes into these mysterious elixirs.

Remember those old cigarette advertisements that used to run when the tobacco industry wasn’t regulated as it is today? Similar ads are set to  make a comeback, but this time around they’re advertising e-cigarettes.

Because the FDA still has no control over the marketing schemes of e-cigarettes, ads from major e-cigarette companies have already been accepted by local broadcast stations within Los Angeles, New York, Chicago, Dallas, San Francisco and Seattle. No major networks have agreed to run these advertisements.

Certain e-cigarette ads should be under the same scrutiny as conventional cigarette ads. There is still nicotine present in the tobacco leaves used in e-cigarette juices, making it a tobacco product.

It’s in our best interest – while this product still has unknown effects – to regulate how much e-cigarettes are pushed on the public.

While I have no personal problems with people who smoke (it is their choice), these tobacco products should have some sort of boundaries to make sure that this smoking culture doesn’t become normal in our future generations.