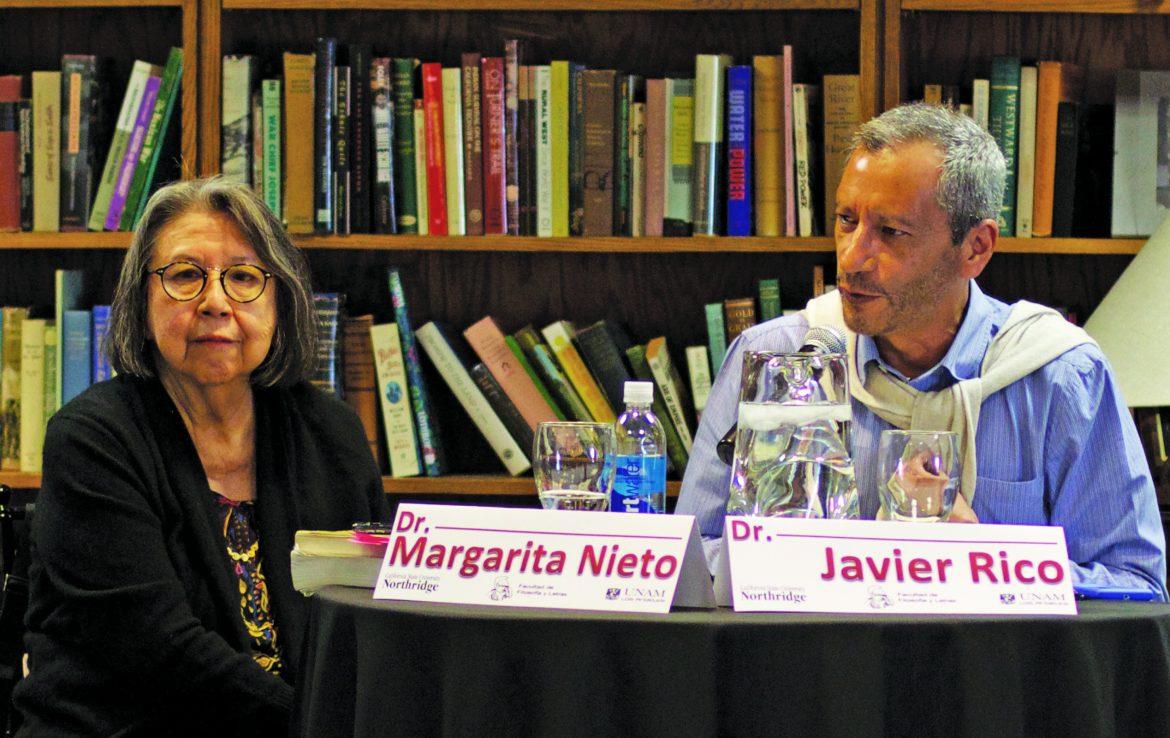 Margarita Nieto, professor of Chicana/o studies, and Javier Rico, a professor from UNAM, speak at an event commemorating Octavio Paz, a Mexican writer. This was the first event of the CSUN-UNAM partnership and the Center for Mexico and Latin American studies. File photo/Daily Sundial

A recent speech by Asian American studies professor, Glenn Omatsu, reminded me of the importance of Asian American and ethnic studies in combating stereotypes.

Omatsu is a pioneer in ethnic studies. For more than thirty years he has explored the rich history of Asian Americans, such as all Asians do not all look alike, and many are far from the model minority invented by white Americans.

Omatsu has a complex world view. He puts each Asian and ethnic groups into a historical and cultural context. Omatsu sees ethnic studies as a transformative force that challenges the narrow-mindedness that grips American culture and education.

And this social transformation always comes from the left that has a different epistemological base than moderates. The left asks different questions and uses different tactics. Thus I was not surprised that Omatsu understood the arguments of Chicana/o studies in opposing the CSUN-Universidad Nacional Autónoma de México (UNAM) accord.

The UNAM accord was signed into effect back in March. This agreement essentially establishes a Center for Mexico and Latin American studies. This center will be housed at the College of Social and Behavioral Sciences and will be open to everyone this fall. It will also serve as a base for academics from UNAM who are doing research in America.

Although this sounds good on paper, there are things hidden in the fine print.

As the keynote speaker for the Asian American Studies Awards Ceremony, Omatsu spoke about the partnership announced by top university officials with UNAM.

Omatsu goes on to say that these top university officials could be “refusing to acknowledge that they made a mistake in not consulting in advance with an ethnic studies department for an initiative that directly affects that department and the students and communities it serves.”

CSUN’s Chicana/o studies department responded forcefully to the clear violation of faculty governance in not consulting with the Chicana/o studies department and the community first. It is irrefutable that the campus community had no interest in Mexico before the UNAM accord. However the student population has shifted, and more Latino students than white students are matriculating. This surge is in great part driven by the Mexican origin population.

The dean of Social and Behavioral Sciences made clear on several occasions her intentions of moving into the field without consulting Chicana/o Studies. Indeed, we were only notified after the UNAM deal was final. The administration then told us to take it or leave it. Our only alternative was to hit hard and expose the deceit of the administration and UNAM.

We understand that these types of transgressions will happen due to reductions in state funding for higher education.  Administrators and faculty who ignored brown students in the fields of Mexico and Latin America in the past now see it as their right to cash in on them.

We responded, “if you like Mexicans and other Latinos so much, hire them.” We estimate that six percent of the faculty is of Mexican origin. We further challenged it, “if you say that our data is wrong, give us the raw data.” We challenged the administration to disprove our allegations of institutional racism.

Clearly this UNAM agreement does not benefit social reformers. It benefits the Partido Revolucionario Institucional (PRI) that is privatizing Mexico and selling off its natural resources, its patrimony and privatizing basic institutions. Part of PRI’s stated agenda is to privatize public education and UNAM.

The North American Free Trade Agreement (NAFTA) in 1994 touched off the Zapatista Revolt. It eliminated small farms that could not compete with subsidized American agribusiness. NAFTA has produced a dozen billionaires while the poor got poorer. Bottom line, the UNAM-CSUN accord will empower the ruling elite.

Furthermore, the deal does not include any stipulation that the record high tuition of $3,200 per semester will be reduced. It says nothing about the Tseng College, a private university on the CSUN campus, and its relationship to the UNAM-CSUN deal.

Meanwhile, it will bring in more foreign students, students who can pay for a private education. The UNAM agreement says nothing about low-income Mexican students.

It is well established that UCLA and other California universities encourage the registration of foreign students. But at the same time they reduce the number of minority and white student slots.

We demand an open dialogue on the question of privatization and the impact it has on CSUN students. While I realize that privatization will increase due to reductions in state funding for higher education, we must protect our field of study from los muertos de hambre (a derogatory term used by Mexicans to refer to people who are predators, i.e. human vultures). They are desperate people who lack experience or a history of fighting for social justice here and on the U.S.-Mexican border.  Meanwhile, minorities must respect each other. No one has a first amendment right to scab.

-Rodolfo Acuña is professor emeritus at CSUN and a long time activist. He is one of the co-founders of Chicana/o studies and is well known for authoring the book, “Occupied America: History of Chicanos.”