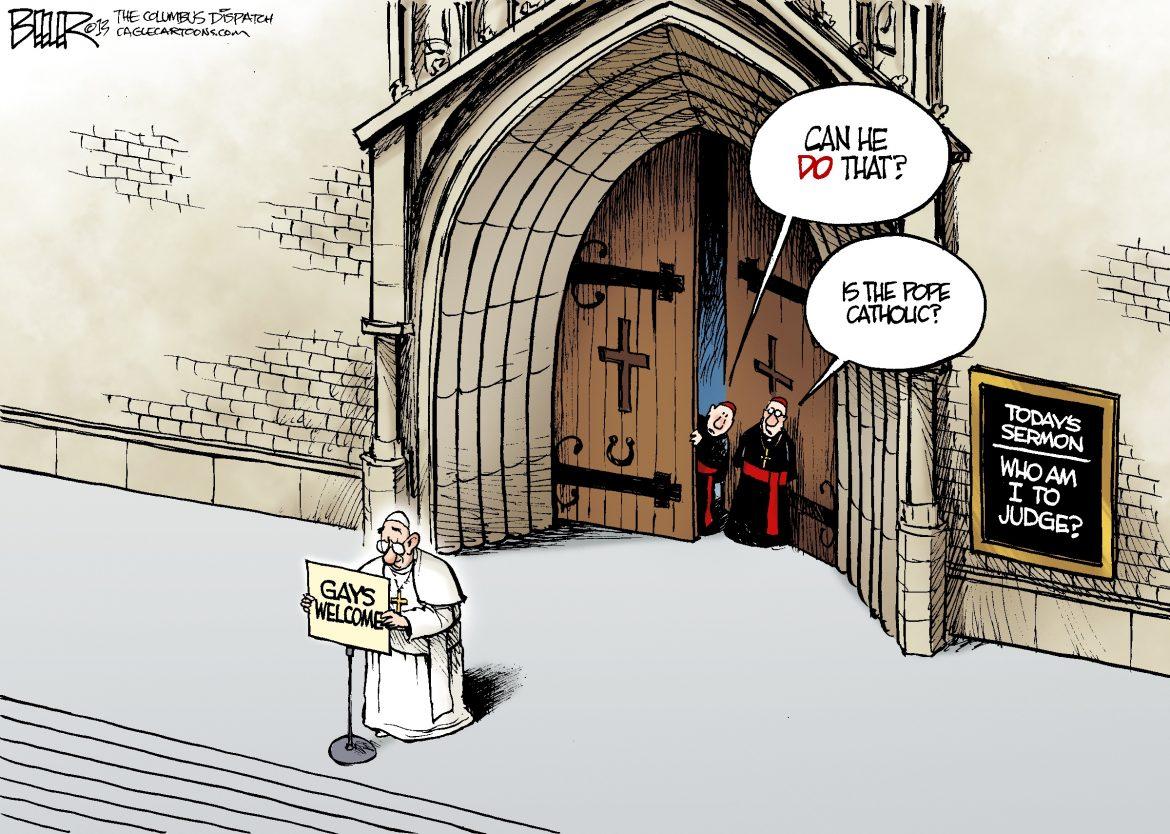 Having declared two former popes saints, Pope Francis is seeking to push the Roman Catholic Church in a new direction. His actions to modernize the church are evident here with the sainthood of Pope John XXIII and Pope John Paul II.

The process of becoming a saint, or canonization in the church, is the highest honor any person can achieve. Traditionally, in order to become a saint, the person has to have been dead for at least five years and shown to have performed at least two miracles.

Francis made sure John Paul II was honored alongside John XXIII. John Paul II held the papacy for more than 25 years and with his stance on birth control and abortion he was considered a conservative.

While John XXIII’s papacy was not nearly as long, less than five years, he instituted many reforms that are still present today. He convened the Second Vatican Council which modernized the church.

Chief among the reforms was the ability to celebrate mass in the local language of the community instead of just Latin. For many young Catholics it may be difficult to believe that up until 1965, mass was celebrated only in Latin. By allowing mass to be said in local languages, it allowed people to learn what was going on without having to learn a dead language.

The reforms that began with John XXIII was a step in the right direction for the church, but there needs to be more change.

Francis, the first pope from the Americas, said women need a stronger role in the church and said, “Who am I to judge?” when asked about homosexuals within the church. These teachings of acceptance are great, but nothing has been done to promote them.

The Catholic Church is seen by many as old and stale, but other Christian religions, like the Episcopalian and Lutheran Churches have been accepting of homosexuals and allowed openly-gay priests and bishops in their churches.

While the church views homosexuality as sinful, and does not allow openly-gay men to become priests, this attitude needs to change. Homosexuality is seen as contrary to God’s plan, but how can that be if we are all God’s children? Birth control, like homosexuality, is also considered a sin. The church’s stance on birth control is that it should never be used.

The church’s teachings are that sexual intercourse should take place between male and female only for the purposes of procreation. Sex for mere pleasure is forbidden under Church Doctrine.

I don’t know if anybody, Catholic or not, still waits for marriage to have sex. While we’re on the subject of intercourse, the Church’s views on abortions need to change as well. More freedoms should be given to women to allow them to choose what they want to do with their bodies.

Speaking of abortions, society shouldn’t have the authority to tell women what they can do with their bodies as well. What fuels the abortion debate both in religious and secular settings is just an old view of patriarchy.

To the Catholic Church, abortion is never the answer, not even in cases of rape.

If a woman is found to have completed an abortion, it can result in immediate excommunication from the church. More rights for women are exactly what the church needs to adapt in the 21st century. The church is ruled by old, white men and needs to change. Many feminists have argued that women should be allowed to become priests.

As of right now the highest position a woman can achieve in the church is that of a nun or religious sister. While many view nuns as the female equivalent of Catholic priests, their roles are very different. Unlike priests, nuns cannot celebrate Mass, nor can they hear confessions, which are two of the most important aspects of the church.

Moreover nuns have to take the same vows as priests, which include a vow of celibacy. Priests are seen as fathers of the church, while nuns are relegated to running schools, nursing homes and orphanages.

Released in 2011, the film “Pink Smoke over the Vatican,” follows a group of Catholic women, many of whom were nuns, who set out to become the first female ordained priests in the church. Of the course Pope Benedict XVI did not recognize the ordination of these women.

The bishops that ordained these women priests believed it was the right thing to do and that these women had been called by God to become priests. The bishops were punished and many of the women were excommunicated by Benedict XVI.

Just recently Francis excommunicated an Australian priest who supported female ordination and gay rights. In an interview with the National Catholic Reporter Fr. Greg Reynolds said he was shocked at this decision. In the article Reynolds said denying women equaled “obstructing the work of the Holy Spirit.”

Unfortunately, as progressive as Francis is, he still does not believe women should be ordained priests. His view on women holding any sort of power within the church are the same as his predecessors. On his way back from World Youth Day in Brazil last year Francis said, “On the ordination of women, the church has spoken and said no.”

The so-called Mother church will not even consider the matter. As a young Catholic who attended Catholic school from Kindergarten through 12th grade I find these views to be contrary to what I was taught. We hold Mary, the Mother of Jesus with such reverence and honor, yet we do not allow women to become priests. We are taught to treat each other how we would like to be treated, but we deny openly-gay priests and women within the church.

If the Catholic church is expected to change with the times more needs to be done. There needs to be an end to the male-dominated society within the Vatican. The church and the priesthood should be open to all.