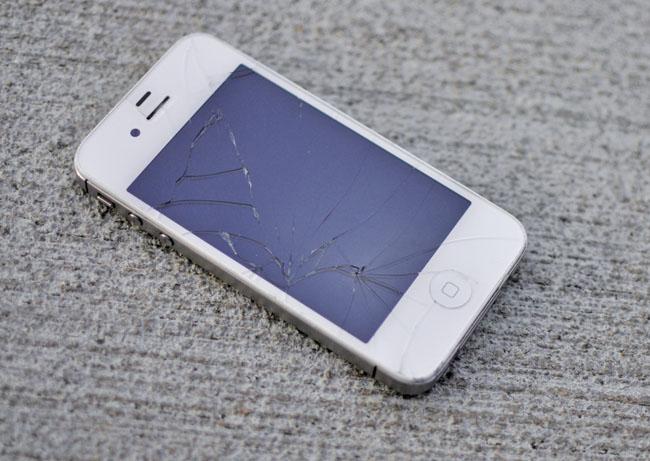 Pulling out a smartphone only to watch it free fall onto the concrete is not a pretty picture — in fact, it’s probably one of the worst things a college student can witness.

Without a cover or case, it only takes one clumsy accident to break a phone or electronic device, regardless of how recently you bought it.

Danny Tamayo, 26, senior math major, felt his stomach do a summersault as his smartphone simultaneously dropped from his pocket and broke.

“I dropped my phone a few times before,” Tamayo said. “The last time I dropped my smartphone, I was walking and I tried to pick up my phone from out of my pocket. Because the phone was big and rectangular it slipped. Smartphones in general should have a grip and be made so that it fits the person’s hands. I didn’t think I would need a cover, because I didn’t think I would drop the phone. I’m about to buy a new phone so I probably will buy a cover.”

Tamayo bought his $100 phone from a vendor at the Northridge mall.

“I lost all of my contacts and I tried to import the data. I couldn’t do it with my old phone number, so it was terrible,” Tamayo said. “I had to research my email to find phone numbers of people and friends who I had known.”

Twenty-nine percent of cell phone users describe their cell phone as “something they can’t imagine living without,” according to a report from 2014 Pew Internet Research.

Dyonna Cannon, 20, sophomore family consumer science major, said she decided to buy a new smartphone instead of trying to fix her broken one after it rolled down a flight of stairs and shattered the screen. Fortunately, Cannon had an insurance plan with her carrier to replace her damaged phone.

“I was really mad because I (had) just got it a week before I dropped it down the stairs,” Cannon said. “At the time I didn’t think about buying a cover because I had just bought it.”

Research shows in total, users check their smartphones an average of 150 times during a waking day of 16 hours, according to the Daily News.

Phone repairs and instructions are now available on Amazon, Ebay, Craigslist or local vendors at inexpensive prices and has made fixing things yourself an easier option. Most of these parts are imported from other countries, where they are sold for $4 or less, according to Christian Anderson, 22, junior computer engineer major and Best Buy salesperson of Geek Squad.

At Best Buy, Anderson repairs and takes apart iPhones, iPads and other electronic devices to replace damaged parts and screens. It takes him about five minutes to repair an iPhone or tablet.

“We fix the parts and we get them in large numbers. We get the parts from our warehouse, (after they’ve) come from vendors, who get them from other countries at cheap prices,” Anderson said.

The piece of glass to replace the iPhone screen ranges from $30 to $50 and the tool kit is about $15 to buy on Amazon or from a vendor, said Anderson. Independent repair companies tend to charge less than cell phone companies, with prices often in the $100 and up range.

In some cases, accident damage may be irreparable.

According to Anderson, if the frame, which includes all the hardware parts, to the device breaks then the device is not fixable and the glass cannot be replaced. In cases of water damage, internal problems with wireless hotspots are also unrepairable.

There are three major breakable components on the iPad and iPhone — the glass screen, frame and LCD screen. The LCD screen displays the picture and the frame is surrounded by two panels of glass.

According to Anderson, most iTouch devices do not have screws to easily open. In these cases, heat guns can be useful to melt the glue to separate the glass. It’s harder to repair devices made this way, because the heat can crack the glass.

Ayriel Talbert, 20, junior psychology and sociology major, dropped her Samsung Galaxy S3 four times in one night walking with her friends. The first drop landed straight onto a rock and broke the whole screen.

“I sent an order through my phone insurance company and got a new phone,” Talbert said. “I kept asking my friends if I had really dropped my phone that many times. Now, every time I am walking I put it away or ask someone else to hold it when I’m doing something. I don’t carry my phone around anymore.”

Talbert said her previous phone, the Samsung Galaxy S2 fell from her back pocket into the toilet.

“It was quick. I sat down and it fell in the toilet. I took everything apart, including the battery and back off and placed the phone in a bucket full of rice,” Talbert said.

Fortunately, Talbert’s Samsung Galaxy S2 still worked and eventually she got an upgrade on her insurance plan a month later.

“Anything can happen, so it’s important to have a cover or a case to prevent breaking it,” Anderson said.