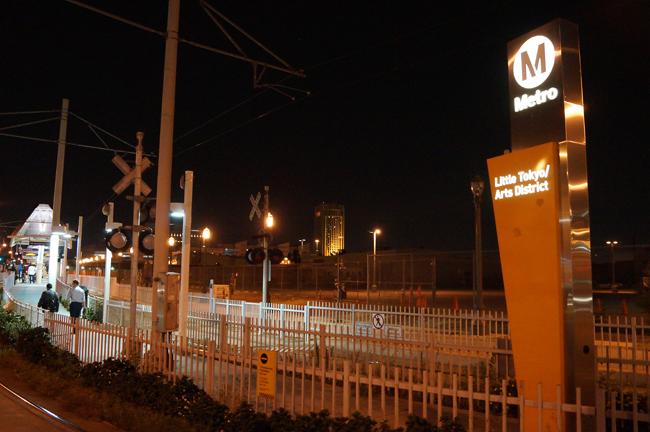 Seventy-five years ago this month, Los Angeles saw the opening of its first, and largest-to-date, central train terminal. Union Station has served as a hub for public transportation for several generations, while paying homage to California’s missionary heritage in its design and architecture.

Today, the Metropolitan Transportation Authority, otherwise known as Metro, owns the property. Four of the eight Metro lines and light rail lines run through the station, which sits near City Hall in downtown LA. Lines and light rail stations are serviced about once every 15 minutes during rush hour, making the system a convenient, easy option for casual city travel and exploration.

Take the opportunity this summer to tour what each line has to offer. We’ve highlighted our favorite stops, and at $5 for a day pass, you can easily knock out several places in a single shot.

The Orange Line Balboa station sits right at the entrance to Lake Balboa, a recreational park with bike and jogging paths, fishing points and open grass. The lake itself has a variety of avian wildlife that ranges from mallards to cormorants, which can be observed from gazebos sprinkled around the edge of the water. Private and public sports fields line the perimeter. For a more rugged terrain, Woodley Park sits on the other side of the lake with an archery range and wildlife preserve. This is a great stop for fitness fiends and picnickers alike.

While probably the furthest trip from its station of our picks, Space 15 Twenty is a tucked-away retail space for food, fashion and the occasional oddball pop up-shop. The resident bookstore, Hennessey and Ingalls, specializes in visual arts, architecture and design publishing. Near Amoeba Records and the Cinerama Dome on Sunset and Cahuenga Boulevards, the area is a hipster mecca with outdoor events and concerts. On Sunday mornings, the Hollywood Farmers Market sets up shop in the streets behind 15 Twenty with fresh produce, food and handmade goods that trump the Northridge market. Space 15 Twenty is about a 15-minute walk from the Hollywood and Vine Red Line station.

Recently abuzz as the venue for this summer’s Jay Z-curated “Made in America” festival, Grand Park is a spot of sunshine in an otherwise concrete city. The three-block-long-space was cleaned up and opened to the public in 2012 with a range of drought-tolerant landscaping and the hippest marketing a park can have. Weekly events include lunchtime yoga, concerts and food truck fleets, flanked by city administrative buildings on all sides. A wadeable memorial fountain rests on the Grand Avenue end of the park, making it a great place to cool down in the city summer heat. The Purple Line Civic Center station hits the surface right at the park’s edge.

The Gold Line serves as an artery from downtown LA through East LA and into Pasadena. Along the way, the line passes through some of the older communities in the city, such as Chinatown and Little Tokyo.

Little Tokyo is an interesting mix of old meets new. The Japanese American National Museum sits across the street from the Gold Line station, which is a stop away from Union Station. The adjacent plaza is home to a Japanese supermarket, bakeries, trinket and comic shops unlike anything else you’ll find in LA. A few streets beyond that are independent art galleries and restaurants. Known as the birthplace of the California roll, this community has a menu for everyone. Desert can be bought with dinner, or you can swing by the supermarket for a pack of mochi to share for much cheaper.

Known as the venue for all mega-events in LA, the Staples Center, LA Live and the LA Convention Center are conveniently clustered across the street from the Silver Line Pico station. Instead of dealing with downtown traffic and impossible parking, take this train from the Red Line Metro Center station. The system runs until 2 a.m. on weekends so you won’t get stranded after your Lady Gaga concert or Lakers game.

There is a small smattering of nightclubs and bars around the area as well. While it may not be as glamorous to roll up to club on the bus, it answers the ride-home problem for you when you’re too tanked to drive.

If you like your entertainment with a bit of taste, give the Shrine Auditorium and Expo Hall a try. Originally built in 1906, the venue has played host to countless acts and events as Los Angeles matured. Now operated by Coachella organizers, Goldenvoice, upcoming concerts include the likes of M.I.A and Lana Del Rey. The auditorium itself is beautifully designed with ornate walls and a massive chandelier. The Expo Hall, while less-obvious during events, also has a touch of the past in its architecture.

The venue is a block away from the Expo Line Jefferson/USC station. Opened in 2012, the Expo Line links downtown LA to Culver City, with plans to eventually connect to Santa Monica.

With all the generic shopping options of your run-of-the-mill mall, FIGat7th sets itself apart with a variety of dining options that range from chain restaurants to specialty gourmet eating. Located between the Staples Center and the Disney Concert Hall, FIGat7th is downtown’s solution to retail therapy. The open-air plaza makes for a unique experience and great event space, but we suggest going early in the summer before the city starts to bake. There’s a farmers market every Thursday on the ground floor, with bright dining tables sprinkled throughout the outdoor mall.

FIGat7th is, logically, located at Figueroa Street and 7th Street, directly across the street from the 7th/Metro Center station, accessible via the Red, Purple, Expo and Blue lines.