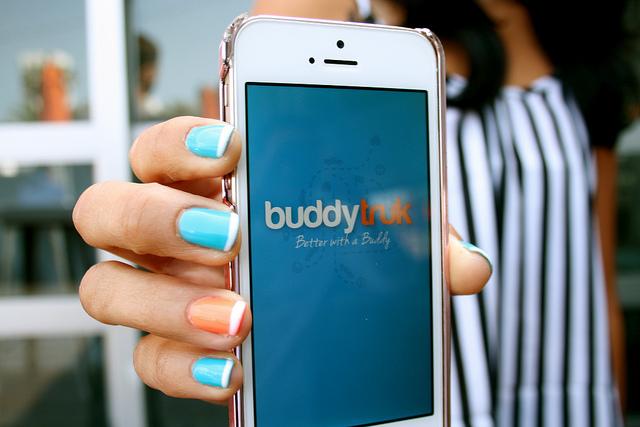 Buddytruk is an app offered for iPhone and Android users, catering to student looking to move in or out of their homes. Based out of Santa Monica, Calif. the app will be available for students to use in June. Photo credit by Neelofer Lodhy

Buddytruk is an app offered for iPhone and Android users, catering to student looking to move in or out of their homes. Based out of Santa Monica, Calif. the app will be available for students to use in June. Photo credit by Neelofer Lodhy

Brian Foley, CEO of buddytruk, was moving into a new apartment a few years back and was not familiar with driving a large U-Haul truck. When Foley attempted to park it, he accidentally tore off the bumper of a car that was parked in the street.

When entering his new apartment, he soon found out the car he had hit was his new roommate’s car. At that point, he decided to make a change and find an easier way to move and haul things around. The idea of buddytruk was then conceived.

Buddytruk, which is currently under development, is devoted to making the moving process a lot easier, friendlier, and community oriented according to their website. Buddytruk is based out of Santa Monica and was founded in 2013 by Foley and his business partner Russell Tuchman.

The app is a platform to connect people who have moving or hauling needs and connects them with a local driver in their community who will help them move their items.

“I’m a recent college graduate,” said Adam Jacobs, social media manager for buddytruk. “I’ve had to move more times than I really wanted to. Using a U-Haul is no fun, and I hate bugging my friends, so we came up with this idea for buddytruk for on-demand moving and hauling.”

Moving can be difficult enough, but having to physically move your things to another location is even harder when you don’t have the right resources. Most people don’t have enough space in their car to put large items when moving or purchasing them, so they have to call a friend to borrow their truck or rent one of their own, which can be expensive.

In order to use buddytruk, one must create an account and be at least 18 years old. Users must sign on and input their pick-up and drop-off location and include a picture of the item they’re shipping. The closest driver in the area then can accept or reject the pick up request. He also said all transactions are based on distance and time.

“I would so use something like this when I go back home for the summer,” said Jennifer Paladio, 19, sophomore art major. “(It) is pretty cool that you can use it on a mobile device. I think it would come in handy when I buy new furniture and stuff for my dorm.”

BuddyTruk has created a movement called social hauling. Social hauling is the collaboration of being able to use a local community driver to move and haul people’s items, Jacobs said.

“We see social hauling as the movement of people coming together in the community to make this whole process much easier,”  Jacobs said.

As far as drivers go, buddytruk is hiring drivers from the west side of Los Angeles all the way to the San Fernando Valley. Jacobs also said all drivers must be at least 21 years old, pass background, DMV and criminal checks and require proof of auto insurance in order to make the service as safe as possible.

He also said that they have already been getting a lot of requests from parents, students and professionals who want to be drivers for extra work.

“I would be interested in being a driver for them,” said Luis Silva, 22, senior business major. “This would be something easy to do over the break and make some extra cash and put good use into my dad’s truck.”

Buddytruk will be launching in LA, but within the next few months they hope to be bi-coastal. Jacobs said the next cities to target will be San Francisco, Austin, Texas and hopefully New York. He also mentioned that the app will be available for both iPhone and Android users by mid-June.

“We want to be in every single city in America, and even the world, at that point,” Jacobs said. “We want to be the go-to resource for moving and hauling.”