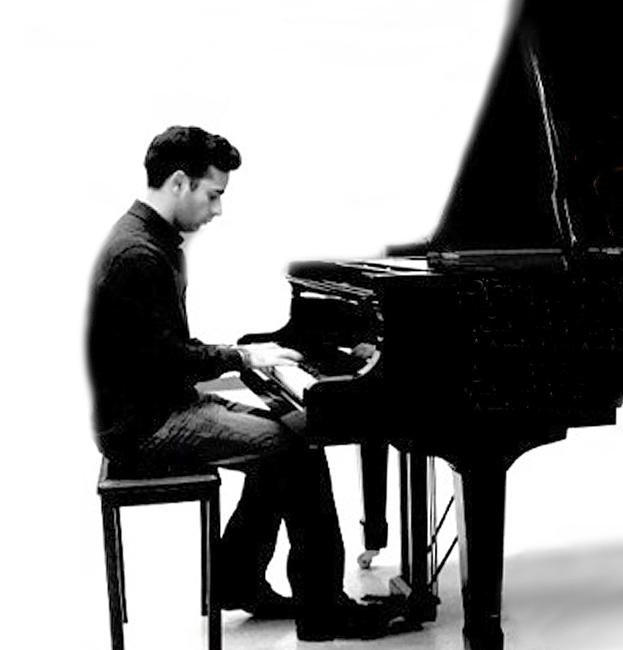 Music therapy major, Arsi Nami, sits for a portrait at a piano. Nami was inspired to become a music therapist after seeing his brother's recovery from spinal surgery. Photo courtesy of Arsi Nami.

Charlie Kaijo
Arsi Nami watched his brother undergo music therapy for a spinal cord surgery that left half of his body paralyzed, but didn’t realize how the experience would shape the course of his life.

In 2008, his brother underwent surgery to have a tumor removed from his spinal cord. Part of the surgery required cutting through the nerves that controlled his nervous system. Following the procedure, he had lost all movement in the right side of his body from his shoulder down including his sensations.

He began rehabilitation at the Dallas Medical Center, in Dallas, TX. His mother, who would often accompany the rehab sessions, would move Nami’s brother on a wheelchair to a piano where he would make music with a therapist.

Together, they worked on finger movements and restoring his physical senses. The experience also restored his sense of joy.

“It started getting blood flow to his fingers, arms, and spine,” Nami said of his brother. When he was hearing it, it was calming him down.The best part of it, he had previous experience playing piano when he was a kid but not as much when he got older. It brought back that memory.”

Arsi said the music stimulated his nerves through the release of endorphins in his brain, helping him through periods of depression; it strengthened his immune system and helped him regain his movement.

After one year, his brother had returned to work. Nami was moved by his brother’s recovery and decided to pursue a career in music therapy. He learned CSUN had a music therapy program through the music department.

“It was not about entertainment, it was about psychology music and therapy music,” Nami said. “It was more of a clinic and healthcare setting where you actually get to go to hospitals, prisons and rehab centers. Music entertainment is about entertaining people. Therapy is about interaction. Instead they are playing the music, and you’re there to support them. They are the conductor, and I’m there as a support.”

During his classes, he would sit with participants, other students in this case, to have pretend therapy sessions where he could practice. Currently, he is interning at a clinic called Arts and Services for Disabled, Inc. Nami is scheduled to graduate in May before he takes his board exam to be certified as a music therapist.

“A session I’m doing right now, I’m introducing world music to disabled clients,” Nami said. “I show them about the country, and I play the music, and we dance and do rhythms from those countries. I bring a drum called a Darbuka (a Turkish Persian drum), and the clients can play it.”

Born in Iran, Nami was exposed to Middle Eastern and Persian songs. He grew up in Sweden where he discovered Trance (electronic dance music) and began writing his own songs influenced by his interest in world music.

In the future, he hopes to bring his music therapy to Africa, Iran and South America.

“Those countries are very poor, but what keeps them going are the culture and music,” Nami said. “The culture is very colorful. I want to travel and experience music all around the world, not to go to the big cities but all of the small villages and introduce music therapy to the kids and families.

Although, his brother’s experience had influenced his decision to pursue music therapy, he credits his mother for helping him see music’s healing qualities.

When Nami was two, he lived in Iran and had developed an eating disorder. He did not like to eat but never understood why. She took him to see a doctor who wanted to give him medicine to stimulate his appetite, but was against the idea.

Nami had developed low blood pressure. His mother tried organic teas, but it had no effect. She thought, at first, he didn’t like the food she offered him. He said it was a song his mother played him that helped him develop his appetite.

“She was aware. Right away, when she played that song and saw me, she saw music helped,” Nami said. “It helped save my life and my brother’s life.”

Nami’s music has been featured at the 2010 Cannes Film Festival. He was awarded the Bayramian Art Scholarship through the Valley Performing Arts Center and the James R. Simpson Merit Scholarship awarded by President Dianne Harrison.
On April 28, a song he wrote called “She wants to fly” will be featured on the FOX TV series “Bones” on May 12, 8 p.m. PST.