Sand Volleyball: Development of program is a team effort 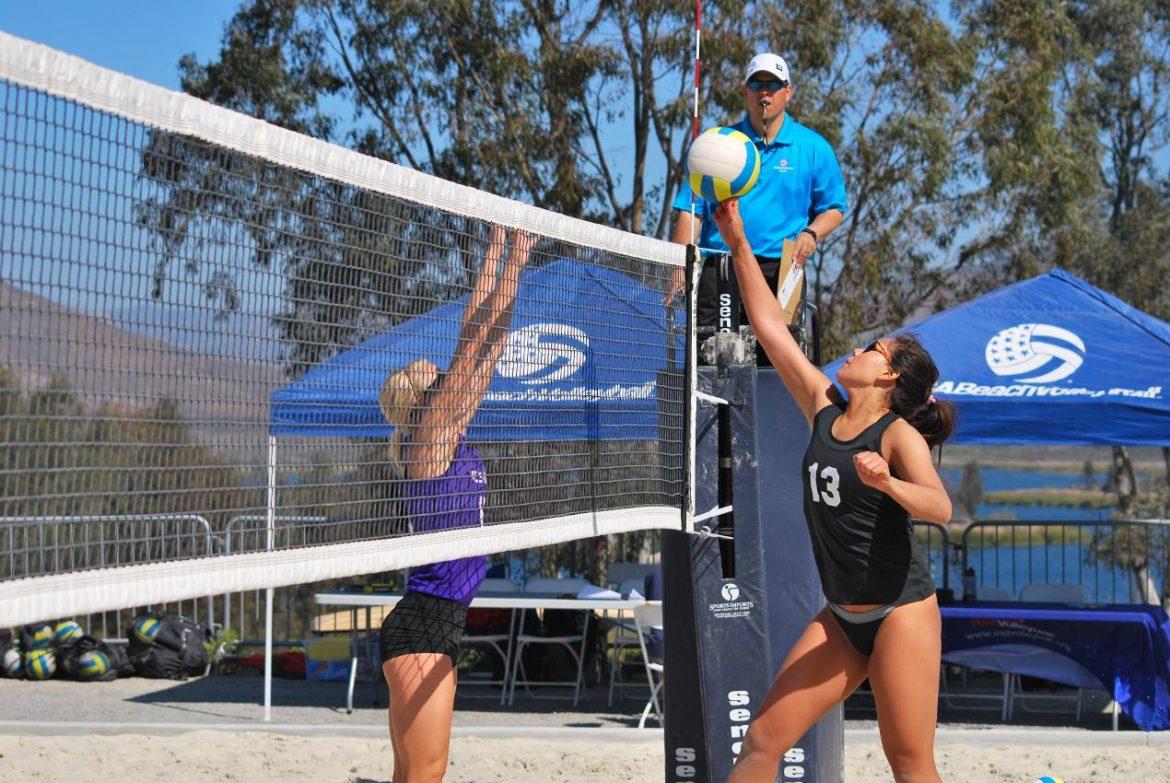 With the help of a spirit that epitomizes the love of the game, there is a new sport coming to the Cal State Northridge campus.

CSUN announced the addition of sand volleyball as the university’s 19th intercollegiate sport earlier this spring and completed the program’s first season in March.

“Major schools started adding the sport, schools that we compete with,” said Tom Ford, associate athletic director. “We were going to lose not only a recruiting advantage but also a competitive advantage. It’s basically to keep up with the Joneses, and then beat them.”

In 2010, the NCAA announced sand volleyball as an emerging sport. This marked a shift in the path of female student-athletes. More players are beginning to mark themselves as either a sand volleyball player or as an indoor player.

CSUN is attempting to enter the heart of the sand volleyball competition. With former national champions Pepperdine and Long Beach State nearby, Southern California is the place to be for this ever-growing sport.

Due to the increased interest in the sport, President Dianne Harrison’s decision to add the sand team was well received among the athletic department.

Last fall marked one of the most successful seasons in the history of CSUN women’s volleyball. After winning the Big West Conference, the Matadors went on to the second round of the NCAA Tournament for the first time in school history.

With the indoor season taking place in the fall and outdoor sand season in the spring, CSUN volleyball will have the opportunity to train year round.

Competition began this spring semester with the Matadors completing a full season by NCAA and American Volleyball Coaches Association standards. Those requirements were completed in the month of March seven competition dates. In the future, women’s volleyball head coach Jeff Stork plans to extend this to the maximum of two months with 16 competitions.

“We want to be great at both sports,” Stork said. “The sand side of it is in its infancy right now as far as where we are in our development of our players. Certainly, the sand volleyball is going to help our indoor more than our indoor will help our sand at this moment, but I think, in a year or two, we are going to be challenging a lot of good teams.”

Six weeks of preparation for this first season of sand volleyball illustrated the differences in the two games.

Stork said that there are three fundamental differences between sand and indoor. First, indoor matches use six players on each side, while sand matches are two on two (commonly called ‘doubles’). Secondly, the playing surface provides difficulty with mobility on the sand as opposed to a solid, flat court. Lastly, the elements of weather and mainly wind in the outdoor game is much more difficult to handle than the controlled indoor atmosphere.

The eventual long-term plan is to split into two separate teams due to the increased specialization of volleyball athletes. During indoor play, a player is much more specialized to a certain position with a specific skill set to match. In outdoor sand doubles, a player must possess a much more versatile arsenal of skills. Stork said that all of the indoor players are transitioning well.

“Those skill sets need to be honed over time and when we mix them, it’s difficult to maximize what they do,” he said. “We were challenged last year or this past season with our sand volleyball because of (lack of) a facility.”

This spring, matches were held at each competitor’s respective facility, while training took place mostly indoors. The team only went down Santa Monica Beach twice a week to actually practice in the sand. Martin said constructing a facility is the next step in developing the program.

The planned facility is marked to break ground on the Zelzah Street side of campus, south of the tennis courts, north of the activity field and east of the soccer field. The three-court set up will not just be for the volleyball team, but for the entire campus community.

Currently in the planning phase, it is not a question of if, but when, the facilities will break ground. There is a sense of urgency between Martin and Stork while schematics are being drawn, engineering is being done and numbers are being crunched.

CSUN may not have the funding that USC spent to build their courts, but Martin is working with Vice President of Administration and Finance Colin Donahue to make the sand volleyball courts a reality.

“It’s a fundraising effort from the university,” Stork said. “Right now we need to dig a hole and put some sand out there so our girls can start training.”

Enter the spirit of the game, the second annual Ramon Calderon Cup.

Ramon Calderon was the husband of CSUN geology professor Dr. Dayanthie S. Weeraratne- Calderon. Calderon passed away October 2012 at the age of 46 of a sudden bacterial infection. Since his passing, his spirit lives on through the people he touched and the joy he spread through the game of volleyball, Weeraranthe-Calderon said.

Ramon Calderon was born in the Philippines and moved to Southern California with his family at a young age. A natural athlete and basketball player in his youth, he did not discover the game of volleyball until he moved to Simi Valley later in life. Stork said he became an ambassador to the game.

“It didn’t matter the level, he just wanted to play, he enjoyed the fellowship that the sport brought,” Stork said.

Every Saturday, you could find his bright red shorts and signature jump serve on the Zuma beach courts spreading the sport he loved so much. That is where he met his wife.

“We fell in love in the sand. He taught me how to jump serve,” Weeraratne-Calderon said. “Ramon and I were married three years ago. He had been coming to CSUN games longer than I have known him. He made me a fan of my own school team.”

Calderon had aspirations for a CSUN sand volleyball team long before the department did and began planning before he fell ill. He wanted to donate money from tournaments towards developing the program and was planning to run four tournaments a year.

Weeraranthe-Calderon remembered him saying it was the best way to grow the sport and to get athletes trained for potential Olympic careers.

‘Grow the sport’ became somewhat of a motto to those around him. His friends decided to start a tournament every year to keep Ramon Calderon’s spirit of gathering people together to play alive.

The first event in March of last year raised $8,000 and benefited Dig 4 Kids, an after school program committed to providing youth in low-income communities with increased opportunities for academic and athletic achievement.

“We chose the CSUN volleyball team because they should join the division one sport but they don’t have a beach,” Weeraratne-Calderon said. “We’re doing the best we can and trying to help some great athletes with a lot of heart play some sand volleyball. It’s exactly what Ramon would have wanted.”