10 tips on how to land your next job 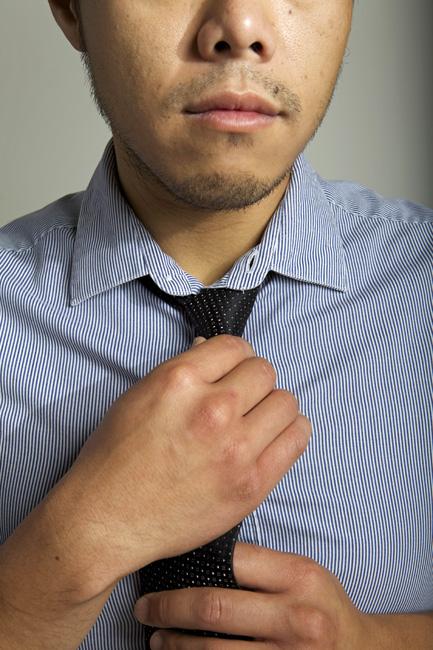 Upon entering a job interview, it's important to have a suit and tie at hand for a lasting impression on potential employers. Photo credit by Loren Townsley.

The Bureau of Labor Statistics announced on May 2, that businesses and professional services have added 75,000 jobs in April, the most jobs in more than two years, while the unemployment rate has dropped to the lowest it has been since 2008.

Employers plan on hiring 7.6 percent more from the graduating class of 2014 students than they hired in 2013, according to a survey of 161 employers conducted by theNational Association of Colleges.

Although the outlooks of being hired soon after graduation are looking up, a graduating student must find ways to stand out from the crowd. Here are 10 tips on how to leave a lasting impression and land your dream job or summer internships.

1) Tailor each resume and cover letter to the job

Blasting out the same resume regardless of the job is a mistake that many students and job applicants make. Employers are receiving a high volume of cover letters and resumes, and many times these resumes are first scanned by a computer for key words.

To avoid slipping through the cracks, Kathy Leslie, intern coordinator and English professor, suggests that the resume include the keywords that can be found in the job description.

“The resume should match the post. Make it match the tense,” Leslie said. “If it says ‘writing’ have your resume say ‘writing’ so that the computer will pick up the keywords and put it in the call file.”

The employer wants to know what the applicant can do for them, thus making it imperative that the cover letter includes how the applicant’s experience, skills and know-how from CSUN can benefit the company.

Before writing the cover letter, applicants should research the company to find out what their mission statement is, how long they have been in business and what they care about so that they can highlight how they can be a strong contender for the job.

2) Be teachable and likable

“At the end of the day its going to be about personality and relationships,” said Ryan Kahn, career coach on the MTV series “Hired.” Success in attaining a cool job in the film, music industry and public relations rely on building quality relationships.

The employers can teach the business and the systems of how they work, but they need someone who is teachable and driven with a positive attitude. These are characteristics that make employers enjoy having an individual around, especially considering the amounts of hours spent working together on the job.

“Nobody wants to hire an assistant who has a bad attitude and is entitled because they went to a prestigious school,” Kahn said. “They want someone who wants to be successful, wants to work hard and is fun to be around.”

3) It’s not what you know or who you know. It’s about who knows you.

People say relationships rule the world. In a competitive job market, companies may receive on average 200 resumes for each job opening, according to Kahn. In a big company, hiring managers are presented with a stack of 20 resumes from applicants with internal referrals on top of the 200 resumes by those without connections.

Hiring managers are more likely to pay attention to the resumes of those who are recommending by trusted sources. Those lost in the bigger pile, may have the best GPA’s, skills and come from the prestigious schools, but are more likely to be overlooked due to their lack of connection.

Relationships to those on the inside can open the door to an interview that may lead to a job.

Freshman, sophomores and juniors should prepare for their future in the business they desire by interning in that specific field of interest. This is one of the best ways of gaining experience and building relationships with professionals.

Internships allow students to build their resume before graduation, giving them a unique story that can set them apart from other job applicants without experience.

Kahn, who is also the author of “Hired! The Guide for the Recent Grad,” has been described as a top source by Forbes for helping students and recent grads land their dream job. He experienced first-hand how important internships were in building relationships and experience.

With no contacts in the music industry, Kahn was able to break into the business upon completing his third internship with Warner Music Group.

“In the internship (with Warner Music Group) I came in early, I stayed late. I did my best to build great relationships with the people I was working with,” Kahn said. “ I went above and beyond in the projects I was given. If they asked me to do a task I would do it fast, exactly as they wanted and I would do it with a smile on my face.”

An interview outfit should be ready at all times. Leslie encourages her students to buy a business suit or dress. Business attire is  usually on sale after christmas and toward the end of the spring semester for graduations and weddings.

Salespersons at the department store can help find the proper attire for a student on a budget. With the money saved, Leslie suggests going to a tailor to have the suit fitted.

“Properly dress for the job you want two jobs from now, that will make the impression of the employer that you take the job seriously and you take yourself seriously,” Leslie said.

Women should avoid too much make-up, perfume and large, dangly jewelry.

Kahn suggests writing down 20 companies that are of interest. Before graduation, students should make it a point to meet one person from each of the companies on the list to build a diverse network of professionals in their dream company.

It is important to be creative in meeting these professionals from the hit list. Asking friends, family, professors or counselors whether they know someone who works in the desired company can be the first step.

Social media can also be a helpful source. When searching LinkedIn for example, professionals can be found with commonalities. Perhaps a former student of CSUN now works at one of the companies from the hit list.

Once graduation approaches these contacts that have been made over the years can turn into relationships that may be potential referrals for a job.

Joining college chapters of professional groups and registering with the career center are also proactive methods of networking on campus.

7) Have questions ready for the employer

These questions should not be “When will I have my first raise?” or “How many vacation days do I get?” In this case, the job seeker should ask about what a typical day on the job looks like.

Another question could include what the ideal candidate for the job looks like. The answer to this question will give the interviewee the chance to say “that’s me.”

Graduating accounting student, Kevin Oppong, has been on several interviews preparing to launch his career right out of college. Before an interview, he researches the company and its recent media exposure to develop questions relating to the company’s recent activity. Oppong says this knowledge shows the hiring manager that he is informed and interested in the company that he is looking to work with.

8) Prepare a story for your interview

Employers will ask during the interview about past conflicts on the job, strengths and weaknesses.The best way to answer these questions is with anecdotes that tell the interviewer how a problem or conflict was solved.

The feared weakness question can thus easily be answered by turning the negative into a positive, with a story that demonstrates how a problem situation was overcome.

The career center on campus presents itself as a resource for researching what other behavioral questions may be asked in an interview.

9) Never say you are the best person for the job

People tend to want to sound confident. Leslie said presenting oneself as being the best person for the job is like going on a date and saying, “Hey baby, I’m the person you’ve been looking for all of your life.”

Instead, Leslie tells her student to say “I feel like I could contribute to the mission,” or “I’m a strong team player.” It is the employer’s job to say that someone is the best asset to their company since sliced bread.

10) Create your own opportunities that compliment your field of interest

Arrielle Woodyard, 24, is a Pan-African studies major with an interest in fashion and entertainment. She stresses the importance of interning in order to build a network. But her efforts do not stop there. Woodyard uses social media to brand herself.

With a fashion blog she is able to demonstrate that she is on top of trending issues in the fashion industry as well as share her thoughts on these topics.  This personal project allows her to create content that she can in turn show to employers, proving that she is a self-starting, independent, and informed young professional.