Greene leaves his mark on, off the court at CSUN 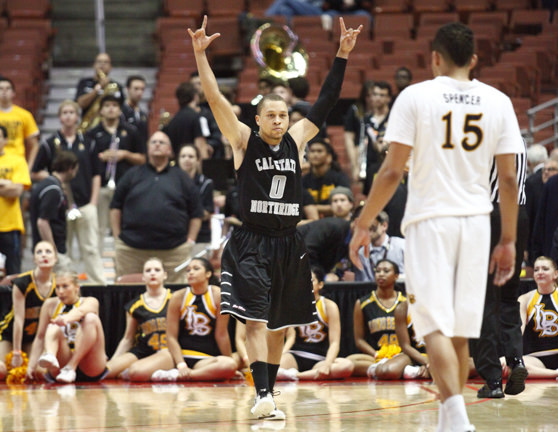 The Matadors spent this past season making a run at a Big West Championship, and fought hard until the final moment of the championship game. But none of the team’s success would have been possible without the leadership and clutch performances of graduating guard Josh Greene.

On several different occasions, as the captain of the team, Greene hit clutch-shots to either take his team to overtime or nail-biting wins against the Cal State Fullerton Titans and the Hawai’i Rainbow Warriors in the Big West Tournament Quarterfinals.

Greene does not take any of his success for granted, because it was a work in progress. He was blessed to have good teammates and coaches in his CSUN career, which helped him develop as a player and person.

“You do not know what will happen,” Greene said about coming into Northridge. “I just knew that my hard-work and my mentality would be able to get me far.”

When Greene entered CSUN, long-time head coach Bobby Braswell was at the helm. Greene remembered choosing CSUN to play basketball because Braswell presented him with an opportunity to change the culture and style of play. The Community Charter High School product from Lakeview Terrace also wanted to stay close to home.

“It was close to my family and my mom, to where they could be able to come see me play, and that was a big factor,” Greene said. “He really believed in me, and wanted to give me an opportunity just to play basketball.”

Braswell and his staff helped Greene grow as a person, he said. As the star player, the staff made sure Greene developed into a leader on and off the court. They made sure to push Greene to give 100 percent in practice, so he can set the example for the team, Greene said.

“There was something about him,” Schwarzberg said. “When clutch-time came, he wanted the ball.”

Greene will be the first player that Schwarzberg will see graduate from the men’s basketball team over his four-year tenure. The two have formed a bond over the past four years, as both arrived at CSUN the same year.

Over the years, Greene really grew up from an 18-year-old kid, Schwarzberg said. He said Greene learned how to better communicate with professors and faculty and matured as a student.

Not only did Greene make the Dean’s List in the fall, but he was very close other times, Schwarzberg said. Greene decided to graduate in four years, instead of three years and a semester.

The two spent a lot of time together and developed a relationship of mutual openness over the past four years.

“He’s become part of my life and part of my family, almost like brothers,” Schwarzberg said. “Our tiffs and disagreements do not come to an ill place.”

A large part of Greene’s development as a player and as a person came in his senior season with the arrival of head coach Reggie Theus. Greene said he was excited because Theus had the experience to turn the program around.

Theus played in the NBA for 14 years and is in the top 50 career scoring list. Theus also coached the Sacramento Kings from 2007-08, and was also an assistant coach at Louisville with venerated college coach Rick Pitino.

Greene said Theus’ approach to the players was very different than Braswell’s. Theus changed the basketball team’s culture of discipline, in favor of a more laid-back approach.

“He cared more about winning, and us being being basketball players,”  Greene said.

”We went all the way to the conference championship in his first year,” Greene mentioned. “If that doesn’t show the guy knows what he is doing, [then what does].”

He is set to leave for China on May 17, for a Team USA college tour, and has signed an agent, in hopes to play basketball professionally next season.

“I was blessed to have a coach that has the connections that he had,” Greene said. “I get to do a job thats my passion and love, and to get paid for it is a bonus.”

Schwarzberg has faith that Greene will have the mentality to play basketball professionally.

“A lot of players have the sense of entitlement and struggle not having a coach around, but Josh is not like that,” Schwarzberg said. “He has the personality to succeed as professional.”

Even after basketball, Greene hopes to stay close to the game. He chose his major, Recreation Tourism Management, so he could have the opportunity to coach.

“I love watching the game from a different standpoint,” Greene said about his life once he is done playing.“I just want to help people, the same way people did for me.”

Greene will miss his days of college, but he is happy to move on to the next chapter of his life, have an opportunity to play the game at the next level and to provide for his love ones. He said he will leave CSUN with a special experience.

“I feel that everybody that comes here, ends up here for a special type of reason,” Greene said. “This is really not a big school, it is a real special school because of the bonds you create.”

Next season, the men’s basketball team will have one of their most talented rosters ever entering any season, according to Schwarzberg.

“We have top 50 recruits coming here out of high school,” Schwarzberg said. “We are still asking ourselves, ‘how do we replace Josh Greene?’”

It will be difficult not having a player which the team can count out on to make the last shot or free throw, according to Schwarzberg. However, the men’s basketball team and Greene are both ready for the challenges that come with moving forward.

Schwarzberg will not be the only one who will miss Greene. The entire program will miss his reliability and relentless work-ethic, both on and off the court, according to Schwarzberg.

“There are a handful of games he won for us, or put us in a position to win with a made shot,” Schwarzberg said.

The team faces a challenge replacing Greene, according to Schwarzberg. Loir cited several instances, over the entire season, where Greene hit critical shots. “Without him, we don’t win any of those games if he doesn’t make those shots,” Schwarzberg said about Greene’s clutch shots in the tournament.