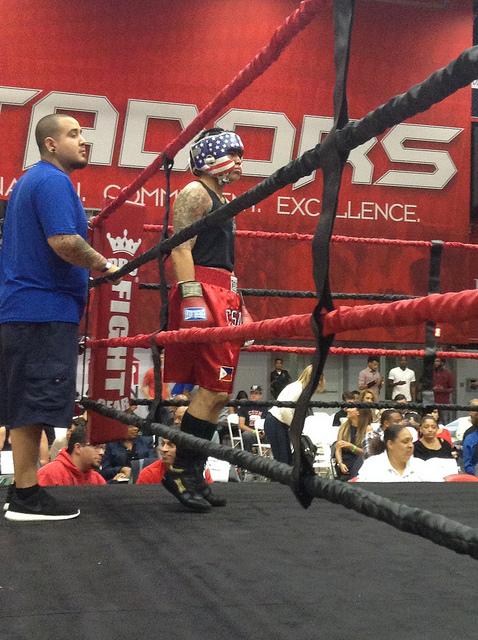 >>CORRECTION: An earlier version of this story incorrectly listed Aaron Goldwyn of USC a McArio Del Castillo’s opponent. Goldwyn pulled out of the match and was replaced with an unidentified competitor.

CSUN became a rare venue for the first boxing event to be held on a college campus in Southern California on Saturday. Athletes arrived from UCLA, USC, University of San Francisco, California State University Dominguez Hills and several high schools to participate in the College Boxing Tournament: Battle of Los Angeles, which despite finals week, drew a crowd of over 600 people.

According to JP Gale, CSUN sport club coordinator, the Matador Boxing Team currently has 20 students with six who participated in the bouts. With only three two-minute rounds, survival instincts kicked in as the familiar ring of the bell launched each fight.

One of the most memorable fights of the night unfolded with Terrance Harris (CSUN), recipient of gold at the United States Intercollegiate Boxing Association’s National Championships and Diego Cortez (UCLA) in the ring. After a series of evenly dispersed punches and tactical movements, Harris stunned the crowd as he took control and defeated Cortez. Contrary to his terse jabs in the ring, he conveyed a composed and modest demeanor as he described his impression of the fight. Harris remarked on his strong desire to improve and his intention to compete in more fights.

The stream of grit and emotion percolated through  McArio Del Castillo’s bout, the Matador Boxing Club president, and his opponent, a late fill-in for Aaron Goldwyn of USC. After two rounds Del Castillo’s opponent held an advantage over an undeterred Castillo by throwing multiple jabs while pinning him into the ropes. In the third round his opponent took a hard hit and lost his balance, but bounced back and defeated Castillo.

“Last time we fought was in nationals about a month ago so I had about a month to recover and prepare again,” said Castillo. “I put in as much work as I could. I probably fought the best fight I’ve ever fought.”

CSUN alumni Lisa Porter, who placed fourth in the US Olympic trials, proved herself a tough opponent once again after defeating Jasmine Singh. Porter dominated the rounds with impeccable footwork that allowed her to evade many of Singh’s punches.

“Honestly I try to relax and not overthink it,” said Porter. “She [Jasmine] was a taller fighter so I thought she was going to throw more from the outside. She didn’t use her reach like I thought she would so it made it easier for me being the smaller fighter.”

The fight between Evan Pineda (CSUN) and Carlos Martin (Cal State Dominguez Hills) resulted in a third round TKO for Pineda after she threw powerful body shots and maneuvered his way to victory.

Gale notes the resistance to having a boxing event take place in an academic setting. He believes the skills learned from boxing can translate into real life just as with every sport within the program.

“There’s the mental fortitude that you need to have, the independence that you learn from it, the dedication and determination,” he says.
All of these traits were exhibited during the fights as Matadors planted their feet and dominated the ring. It was showtime.