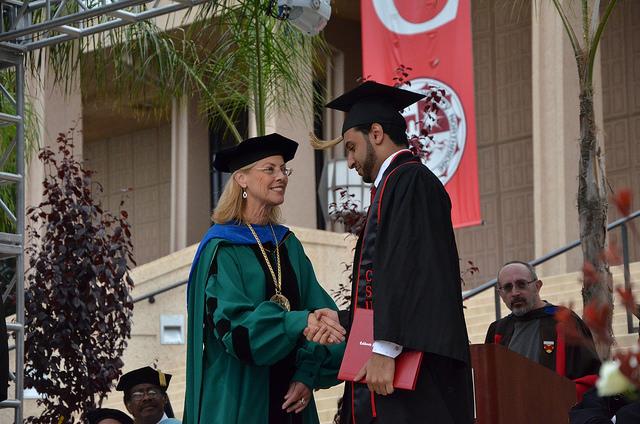 A graduate from the David Nazarian College of Business and Economics is congratulated by President Dianne Harrison during commencement ceremonies at the Oviatt Lawn Thursday morning. Photo Credit: Vincent Nguyen / Contributor

With the allotment of guest tickets raised from four to seven earlier this semester, a large presence of community service assistants, CSUN police department officers and ushers coordinated to fill the 10,500 seating capacity for each ceremony.

Graduating students from the College of Humanities and the Michael D. Eisner College of Education gathered to receive bachelor’s, master’s and doctorate degrees in CSUN’s final commencement ceremony of the year at the Oviatt lawn Thursday evening.

Dianne Harrison, university president, opened the ceremony with a highlight of notable students and a laudation to the graduating class.

“I know all of you have faced challenges and variant experiences and successes,” said Harrison. “Please know that the university is very proud of each one of you.”

The college of education awarded 26 doctoral candidates, along with master of science degrees in Counseling, Masters of Arts degrees in Education, Educational Administration, Special Education, and Bachelors of Arts in Deaf Studies, according to the 2014 commencement program.

The College of Humanities, who’s ceremony was held earlier in conjunction with the David Nazarian College of Business and Economics at 8 a.m., awarded M.A.’s in English, Linguistics, Spanish, Teaching of English as a Second Language and Chicano and Chicana Studies.

Commencement ceremonies for colleges began on Monday with the Mike Curb College of Arts, Media and Communication at 8 a.m. at the Oviatt lawn. The College of Health and Human Development held ceremonies Monday at 6 p.m.

Ceremonies were not held on Tuesday to accommodate for Harrison’s CSU Board of Trustees meeting, but resumed Wednesday with the College of Social and Behavioral Sciences ceremony recognizing undergraduates at 8 a.m.

Twenty graduates part of the Lesbian, Gay, Bisexual, Transgender, Queer and Ally (LGBTQA) community were recognized during Rainbow Graduation, a commencement ceremony sponsored by the Queer Studies program and Pride Center Monday at 1 p.m. at the Northridge Center.

Cadence Valentine, a graduating student speaker at the ceremony, highlighted the achievement students had made in the past two years, including their push to establish the Pride Center as an LGBTQA resource center for students.

As well as recognizing individual graduates during each ceremony, Harrison thanked graduating seniors who made personal contributions to the senior gift campaign. 244 graduates made gifts towards scholarship funding, buildings, equipment, research funds and faculty support.

9,999 students were expected to participate in commencement ceremonies beginning on Monday, with 7,647 students receiving bachelor’s degrees, according to CSUN Today.