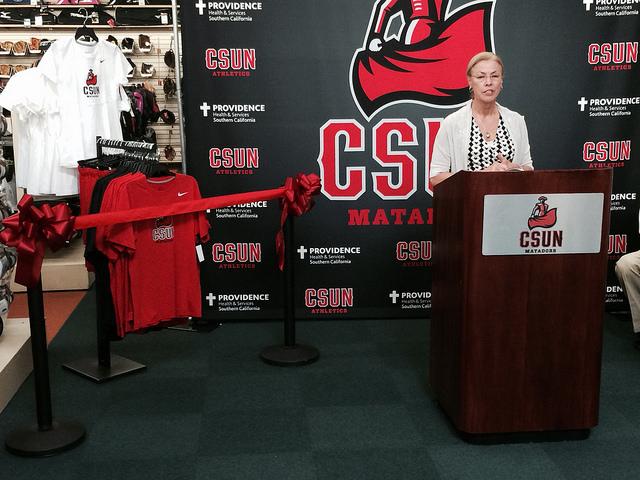 For the first time, students and the campus community can purchase official CSUN apparel from an outside retailer, the athletic department announced.

As part of a partnership with Sports Chalet, CSUN supporters can purchase apparel at the Porter Ranch location of the sporting goods chain. Three percent of every purchase will be given back to CSUN for student athletes, when purchasers become Action Pass members.

“By giving back a portion of the purchase to the university,” President Dianne Harrison said. “That 3.3 percent can be used on scholarships for student athletes, which are greatly needed.”

Harrison recalled being frustrated at the inability to purchase CSUN gear outside of campus when she initially became president two years ago. CSUN apparel made more widely available increases the identity of the Matador, she said.

“We need to develop more ties in our community, and greater visibility, ” Harrison said about the need for the partnership.

The timing of the partnership could not come at a better time, because the athletic department continues to remold their identity on and off the court, Dr. Harrison said.

She said the recent success of the program having all-time-high rankings in men’s soccer and women’s volleyball and recent conference championships increases demand for CSUN apparel, which should aid athletics’ revenue.

Brandon Martin, CSUN athletic director, said the partnership propels the athletic department’s ultimate goal of placing athletes in the position to be the best.

“Our student-athletes need funding and they need resources,” he said.

Since taking over as athletic director more than a year ago, Martin said his goal was to raise brand awareness and community engagement.

“Where this program was a year ago, this was a no brainer,” he said.

Martin said Sports Chalet’s strong reputation and local accessibility made it the “perfect storm.” He said it was important supporters know they can walk into Sports Chalet and purchase merchandise rather than placing an order with an online retailer on the east coast.

Further, Martin said the day was important for the entire CSUN community, and not just the athletic department.

Part of the partnership includes Sports Chalet being an active sponsor at CSUN games.  They will have a representative present signing people up for the Action Pass, which is a free rewards program.