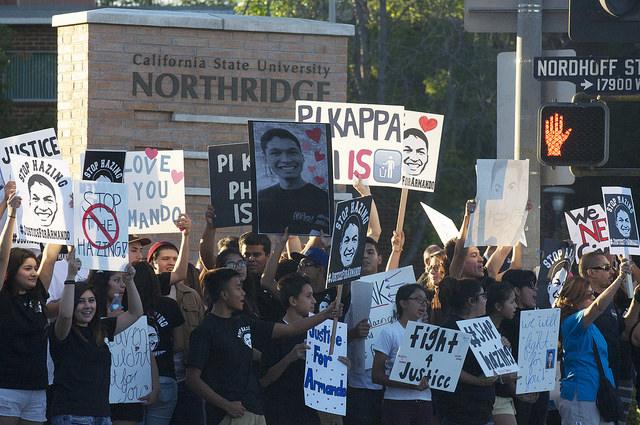 People yelled chants, cars honked their horns, and posters flooded the corners of Zelzah Avenue and Nordhoff Street in memory of CSUN student Armando Villa, who died last week in an alleged hazing incident during a hiking trip with fraternity members.

Ending hazing was the motivation of the rally, as well as remembering Villa’s life. A high school classmate of Armando, Nellie Muñoz, was not surprised by the dozens of supporters in attendance for Villa

“We’re all here for a reason, and that’s to stop hazing,” Muñoz said, “We’re here to end what Armando started.”

Maria Castañeda, Villa’s aunt, said the extended family and cousins were responsible for organizing the rally.

Castañeda said the purpose of the rally was to raise awareness about hazing, as well as obtain justice for her nephew. She also said it was to make a statement.

“We’re not just going to sit here and be quiet,” she said.

Villa’s father, also named Armando, said he was not surprised by the turnout of people at the rally.

“You can see how many lives my son touched,” he said.

Among the many supporters were classmates, family members, and friends supporting the event. Members of the Pi Kappa Phi fraternity were not visible, but Villa’s father said he would not oppose them remembering his son.

“If its really a brotherhood they should have been the first people out here,” he said.

Villa’s father hopes some positive can come out of his son’s death. He hopes to stop hazing at any college and in any fraternity.

“You don’t go to college to die,” Villa’s father said.

Jerry Carmona, Villa’s cousin, described him as a “big dreamer” who attended college to better life for his family and himself.

“He wanted to belong, and he wanted to have the college experience, “ Carmona said. “A good hearted kid shouldn’t have had to endure this, it’s inexcusable.”

Many people in attendance remembered Villa as a happy person always with a smile. Eddie Lopez, Villa’s older cousin, described him as someone who could not get mad.

“He always had the biggest smile ever, no matter how many times I saw him,” Lopez said.

“Whenever your down he always used to motivate you,” Perez said.

Other friends of the family also showed support despite not being close to Villa. Neighbor Louis Islis only met Villa a few times but described him as a courteous kid with a smile. Islis came out to support Villa’s step-father and mother, as well as the cause.

“Ending hazing was something Mando really stood for,” Islis said.

Marisela Escobar, a family friend and CSUN alumna said she was shocked when she heard the news.

“I am very ashamed of the actions of the students here, and they should be held to a higher standard,” Escobar said.

She recalled her own experience pledging a sorority her freshman year of college.

“The administration needs to take a look into these organizations and realize this happens,” Escobar said.

She hopes Villa’s rally will force authorities to do more than their due diligence, and force those responsible to be accountable.

“Those who are not talking need to come forward and be men of integrity,” Escobar said.

The investigation into Villa’s death is ongoing. CSUN ordered Pi Kappa Phi to cease operations, while the national fraternity has intermittently suspended the Zeta Mu chapter at Northridge.

Memorial services for Armando Villa will be held early next week.