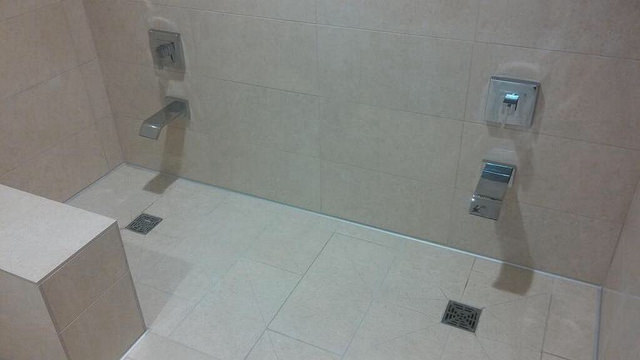 The former fitness center has been renovated into a state-of-the-art space built with the students mind, body and spiritual needs in mind.

At first glance the expansive 16,000 square foot spread gives nothing away. You walk in and portions of the space feel abandoned by the light. Then suddenly one of the sensors picks up movement and the fluorescent lights illuminate the room.

There’s a crescent shaped lounge area off of the main lobby with seating for more than two-dozen.  Down one of the two corridors are five meeting rooms and two conference rooms, all of which are outfitted with user and tech-friendly Creston touch screen panels.

Everything appears to be streamlined with radiant simplicity. The lines are clean and structured and the colors are cool against modern decorative elements like the 3-D lettering announcing your destination across the layered accent wall.

While the newly renovated two-story building offers plenty of eye candy and two of the most unique additions are its multi-faith Prayer/Meditation/Reflection Room and lactation room.

In a time where many publicly funded educational institutions shy away from addressing the needs of its religious students and nursing mothers, CSUN has created accommodations for both groups to gather in a respectful and all-inclusive manner.

“I think she [Debra] likes to be a pioneer,” Godfrey said when asked what made CSUN the campus to lead the charge.

The lactation and Prayer/Meditation/Reflection Rooms were proposed years ago, but without the necessary space available they were put on hold, but never forgotten.  And when the plans were drawn up for East Conference Center it provided the opportunity to earmark a space for both needs.

“We have one of the most diverse Cal State campuses,” Godfrey said. “So we’re constantly trying to serve the varied populations and thinking of ways to benefit not only today’s students, but the students of tomorrow.”

The proposal for the Prayer/Meditation/Reflection Room came after the previous interfaith office disbanded leaving no place for students to go for sheltered prayer. Students turned to the Union for assistance to acquire a new space.

While the Union was able to temporarily designate a small unused information kiosk, the space was tight and limited in necessities. When the kiosk was occupied many students would hold prayer on a nearby lawn.

“The space was a blessing,” Student Sofia Jamil said of the kiosk. “But it couldn’t accommodate the needs.”

The new prayer and meditation space as well as the foot washing rooms were all created from the students voicing their needs.

The Prayer/Meditation/Reflection Room is bathed in an inviting grey with wall-to-wall carpet to match. It can accommodate between 10 and 16 people depending on the set-up and holds a built in shelving unit for students to store their shoes and books while praying.

The foot washing stations are wrapped in tile with modern faucets and a sink.

“For Muslims, praying is a literal process. So it’s nice to finally have something that works for that purpose,” said Jamil.

Shannon Krajewski, associate director of marketing and programs for the union, said the multi-faith space was created to be all-inclusive so that all feel welcome.

“We think that our students will appreciate a space that’s quiet, where they can go and meditate, reflect and pray,” she said.

Godfrey says the Union operates strategically with the students’ well being at the forefront and the centers lactation room was no exception.

The space is intimate and practical, outfitted with a privacy curtain, a chair with a footstool as well as a counter and sink area.  All of which were suggested by several staff members who had recently nursed.

Krajewski, a mother of two young children knows first-hand the importance of having access to a private space while pumping.

“For nursing moms it is a challenge to find a safe and secure place where you feel comfortable and are equipped to nurse or pump,” Krajewski said.

The new East Conference Center was created with students in mind as a place to gather or just come to relax and unwind.

“We all need a quiet place sometimes to stop and breathe,” Godfrey said. “Whether we’re praying or meditating, everyone needs that, especially with all of the stress students feel.”

The conference center and all of its amenities are now open and available for use.

The lactation room and Prayer/Meditation/Reflection Room are self-serve and on a first come basis, while the meeting and conference rooms are by reserved by appointment.

In order to get a tour of the new facility, students and faculty are invited to attend Matafest hosted by the Student Union on Aug. 28.