Traveling opportunity helps students get in touch with history 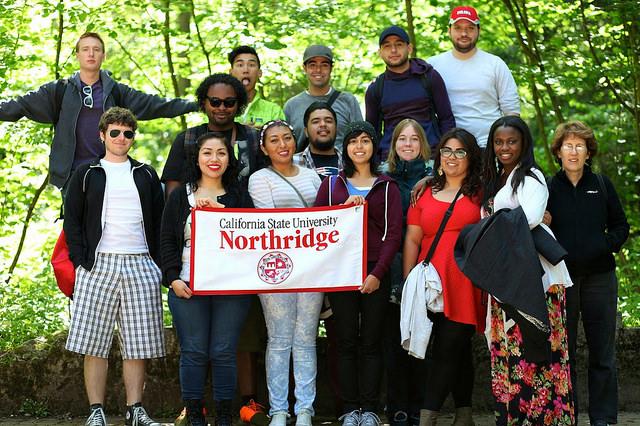 In order to get a better understanding of Word War II, the CSUN Jewish studies department organized a two-week student trip to Poland and Lithuania in June.

Over the course of several years, similar trips were planned by the Jewish Studies department with each one having a different regional focus. This year, Jewish studies professor Jody Myers and history Professor Donal O’ Sullivan strived to provide students with a reflective experience through a history lesson that would help them better understand the tragic events that unfolded in Eastern Europe.

The department spent a year organizing this traveling abroad opportunity with the purpose of helping more students get in touch with history. Although the trip was offered to students in any major, the majority of students who participated were history, religion and Jewish studies majors. A group of 15 undergraduate and graduate CSUN students reached out to the department interested in participating in the two-week excursion.

The estimated price of the Poland-Lithuania trip was approximately $3,300 which included the flight, local transportation, group dinners, entrance fees and tips.

In order to make this trip possible, students found ways to receive funding in order to explore this period in history. While some students were able to save money, others received scholarships from the CSUN Instructionally Related Activities Fund, the Jewish Studies Program and the history department all of which allowed them to travel abroad for the summer.

Myers was pleased to learn that the students’ brief but significant visit to Poland and Lithuania changed the way they perceived Jewish studies. “Since this trip a few more people signed up to be Jewish studies minors,” said Myers.

Students embarked on the adventure to travel and to broaden their knowledge about the two countries rich with history that is both tragic and hopeful.

History major Dan Cano said he was stunned to be among a community that was so open, despite the calamities that affected them.

“Setting my eyes upon a memorial dedicated to bringing an end to Nazism made me realize that no matter how dark things may get,” said Cano. “There is going to be someone there to try to shed a glimmer of hope.”

Cano also expressed his desire see the world and experience different cultures, both of which this trip was able to provide.

“I recently watched Game of Thrones and there was a quote there that Prince Oberyn said, ‘some people grow and die in the same spot and don’t ever go out and see the world,’” said Cano. “I don’t want to be ‘some people’, and that’s how I felt.”

This immersion in culture and history kicked off in Lithuania where the group visited the National Museum of Genocide, the Green House and the Lenin statue in Grutas Park where they got a raw outlook of Soviet occupation. From there, students visited the Copernicus Museum, the memorial site at Treblinka, the Wolf’s Lair and got the rare opportunity to meet Holocaust survivors. “You can have monuments, but the way that people feel, you can’t change that,” said Myers.

Cano said one of the most memorable locations he visited during the trip was the, Wolf’s Lair also known as Hitler’s headquarters in Poland.

“The story behind Operation Valkyrie is amazing,” Cano said.

Students collaborated with Myers to start a blog relating to their journey abroad. The blog is interspersed with vivid stories, pictures, videos and a detailed itinerary from the trip to Poland and Lithuania.

This experience not only gave students a fresh outlook on history but it also helped them grow as individuals.

“It gives you a whole new view once you see what other people go through,” Toledo said. “You know about it through books but when you actually experience it…its surreal.”

In the blog Myers reflects on the trip and describes the transformative nature of the journey.

“This trip transformed how we look at the past,” Myers said. “It has helped develop our critical thinking skills, and put us on the path toward being global citizens.”